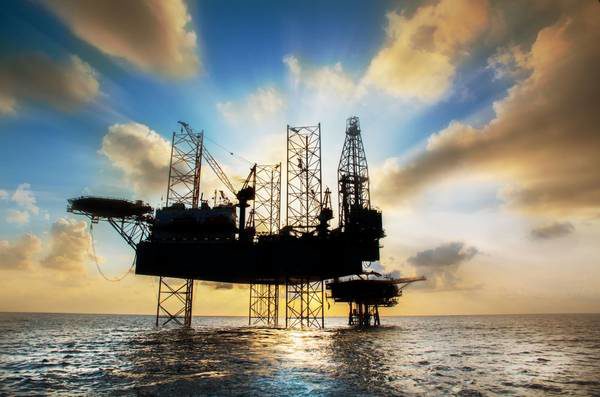 The most bountiful petroleum plays in the Middle East may no longer be storied gushers from the past but more technical offshore areas. The most recent hydrocarbon production boom is under way in the Middle East, and this time, the race is spilling into offshore waters. In this particular analysis, Rystad Energy takes a granular look at up and coming offshore exploration projects, the region’s major gas producers. Increased production of oil and gas will not only help the region meet domestic demand as well as notch up exports, it will entice sizeable capital into the region.

The figure shows the dramatic increase Rystad Energy expects to see in Middle East offshore exploration spending, led first and foremost by the UAE, which will see upstream investments reach an estimate of close to USD1 billion by 2025. Our calculation is based on current commitments, upcoming license awards, and potentially viable future awards. The UAE is followed by Turkey, which could attract an estimated USD350 million in spend. Saudi Arabia also could see a sizeable surge with investment reaching USD300 million or more based on the results of the feasibility study from their Red Sea and other offshore areas. Bahrain could also potentially see a cosmic rise from just USD10 million in 2020 to USD230 million in 2025. Investment in Lebanon and Israel will come in waves with up and down years, but still see material gains in upstream spending. 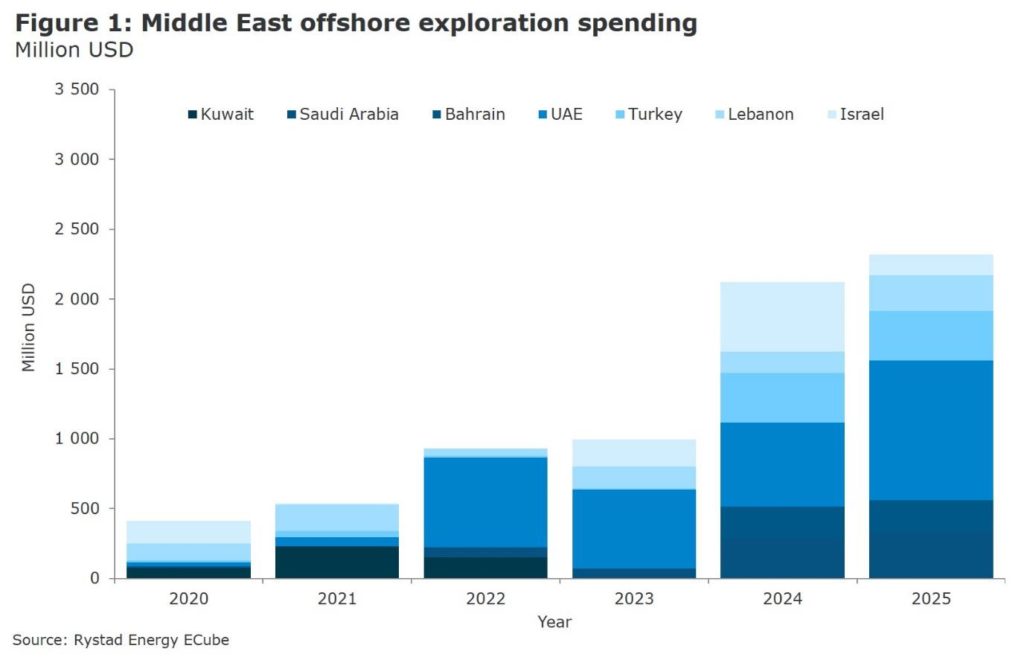 The investment upsurge in the coming years will be driven by new drilling contracts, licensing awards, and future bid rounds.

Kuwait Oil Company (KOC) was able to fast-track this contract with government support, most importantly with the introduction of a new tenders law. According to the law, foreign investors are now allowed to bid on projects directly without a Kuwaiti partner company. The new law is aimed to debottleneck the significant delays from the obstacles of appointing an agent and registering agencies that allowed foreign entities to participate in project tenders.

The offshore exploration work is expected to start in mid-2020 with the first rig expected to come by July 2020 and the second rig by January 2021. With this program, KOC hopes to complement ongoing onshore activity to support long-term domestic gas needs and oil exports. Kuwait has long been targeting to reach production of 4 million B/D (up from current production capacity of about 3.1 million B/D) but so far has fallen short in attaining this lofty goal, especially as production declines at large maturing fields, notably Burgan.

The 2040 strategy includes an oil production capacity of 4.75 million B/D and a refining capacity of 2 million B/D. The company is also keen on securing gas supplies plans to increase the country’s gas-production capacity to between 3-4 billion cubic feet per day (Bcfd) to lessen the burden of importing LNG (which Kuwait has been doing since 2009) and burning oil in power generation.

The UAE has recently seen a series of successful licensing rounds with close to 31,000 sq km of acreage being awarded, both offshore and onshore. A large portion of offshore acreage awarded is located in the Abu Dhabi and Ras Al Khaima regions.

Abu Dhabi National Oil Company (ADNOC) launched its first-ever competitive bid round, awarding five blocks and securing more than USD 800 million in exploration spend. Out of the five blocks, the two offshore blocks have been awarded to a consortium of Eni and PTTEP and the three onshore blocks have been awarded to Occidental, Inpex, and a consortium of Indian Oil and Bharat Petroleum.

Following the success of the first bidding round, ADNOC has launched a second competitive bidding phase, which would offer unconventional blocks for the first time. The round would offer three offshore blocks and two onshore blocks and cover a total area of 32,000 sq km. The area contains existing discoveries and 290 targeted reservoirs from 92 prospects.

Elsewhere in Ras Al Khaima, the shallow offshore Block A was awarded to Eni and a partly onshore/offshore Block 5 to PGNiG. Exploration activity will be carried out in three 2-year phases. 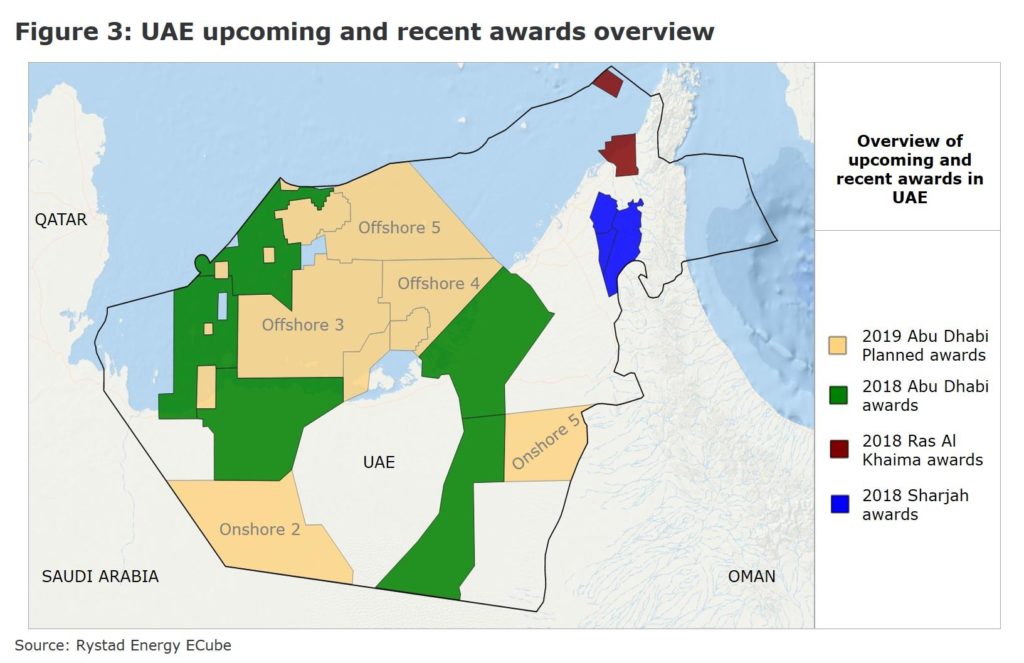 The exploration block awards are expected to help the country achieve its 2030 strategy to ramp up oil production capacity from 3.5 million B/D to 5 million B/D and to become a net exporter of gas. The UAE currently imports 2 Bcfd of natural gas from Qatar via the Dolphin pipeline, for which the contract ends in 2032.

Bahrain on Lookout for E&P Companies

Bahrain’s largest oil and gas discovery in the shallow waters of the Khalij Al-Bahrain Basin in 2018 has prompted the National Oil and Gas Authority (NOGA) to consider US E&P companies with shale expertise to help explore and develop the huge prospective area. Reported discovered volumes are estimated at 80 billion bbl of tight oil and 10 to 20 trillion cubic feet of gas (Tcf), according to the energy ministry. Further appraisal drilling is planned to test the extent of commerciality. Only a fraction of the resources can likely be economically exploited, but given the magnitude, this may result in a significant production boost for Bahrain. Going forward, the next 2 years will be spent evaluating the commerciality of the discovered resources. One project already well under way kicked off in January 2019 when Eni signed an exploration memorandum of understanding with Bahrain’s energy ministry for an offshore conventional oil block, where drilling is expected to commence by the end of this year.

In Saudi Arabia, Saudi Aramco is conducting an investment feasibility study in the Red Sea after unearthing large quantities of gas. To the north in the Mediterranean, state-owned Turkish Petroleum has recently completed the Karpaz-1 wildcat well, which controversially lies in waters claimed by Cyprus.

The upcoming license rounds in Lebanon, the UAE, and Kuwait come at a time as the region is in the midst of ramping up local production to cover domestic energy. As onshore resources mature and become more numbered, offshore exploration is again in the focus. In some cases, we expect the quest to even shift from the mature onshore areas to offshore deep and frontier areas.