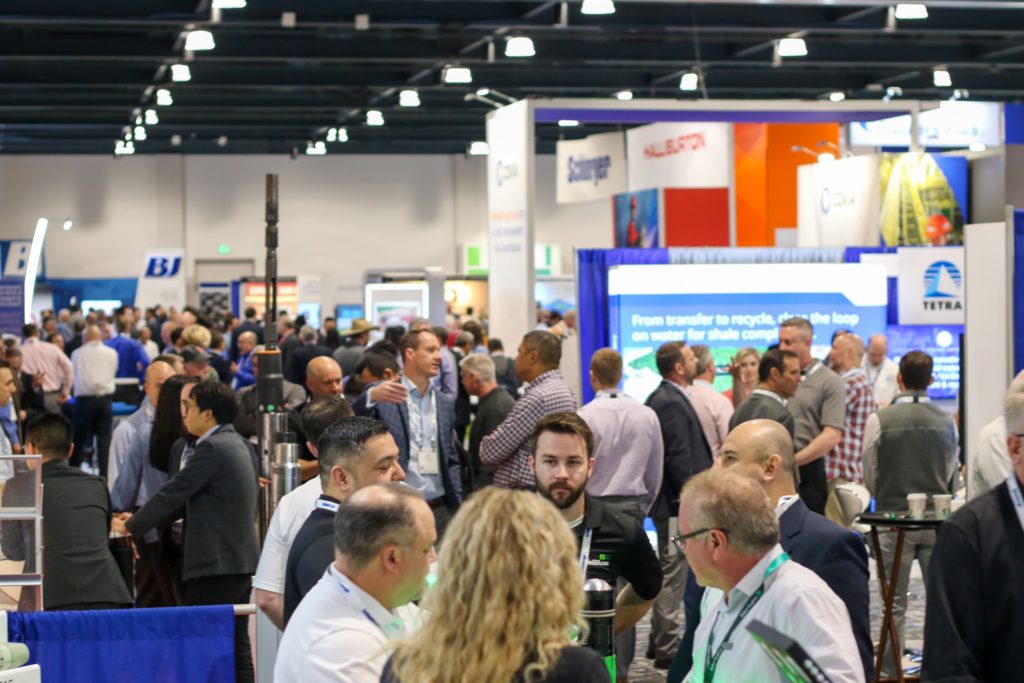 Thousands of unconvetional professionals met this week in The Woodlands, Texas to discuss the latest learnings and techniques driving improvements in tight rock developments. Source: SPE

Treatment pressure is a critical measure of what is going on in the well during fracturing. But when experimenting with new methods, it may not be the whole story.

Consider pods. Those knotted biodegradable fibers are the latest material sold as a way to plug dominant perforations taking the lion’s share of the fracturing fluid and diverting it to ones not getting the pressure needed to create a fracture.

When Shell tested pods, treatment pressure data indicated they were working as promised. The fiber optic data told a different story. While the pressure rose due to plugging, the diversion was not cracking rock at the weak end of the clusters, based on data from acoustic sensors in the fiber optic, which did not detect the sound of fluid flowing into the formation there.

“The fiber optic results clearly showed that perforations were plugged after pods were deployed. The diagnostics also revealed that the outcome was not the desired one,” Shell reported in a paper delivered this week at the SPE Hydraulic Fracturing Technology Conference (SPE 199687).

The paper was the latest annual installment in a series of reports revealing how fracturing reality often conflicts with expectations.

Fiber optic acoustic and temperature readings have shown that the injected fracturing fluid tends to turn into the first or second cluster as it flows down the lateral. As a result, there is not enough fluid to effectively stimulate all the perforations.

The paper reported on a well where different stages received different treatments, and the results varied:

“Shortly after the pods deployment, the pressure was too large, even at relatively low (pump) rates and the stimulations could not be continued,” the paper said. 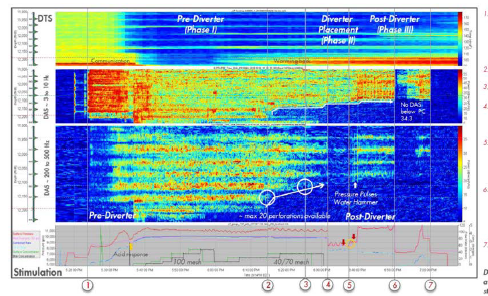 An example of pod diversion results using fiber optic monitoring shows that the technology application did not work in this fracturing stage and was linked to screen-out issues. Source: SPE-199687

While casting doubt on the latest incarnation of diverters, the report did not offer the final word on diversion, or its prime rival—limited entry, which are cluster designs that try to ensure uniform stimulation by varying the number of perforations and their diameters.

The Shell paper cited a study that showed mixed results from limited entry where the first clusters passed—the heel-side clusters. They still received a disproportionate amount of stimulation, with treatment levels ranging from too high too low, with a couple that were just right.

One clear positive, according to the paper, was the ability to cost-effectively evaluate a new diversion method. Fiber testing does not look cheap, unless it is compared with the cost of a multiwell pilot program.

An evaluation with enough pilot tests to provide a statistically significant result would cost from $1-5 million to gather the needed production data, compared with the approach described in the paper that said it cost “a small fraction” of that amount.

There are other companies coming around to this point of view. The cost and technical barriers that once limited fiber-optic testing to a few companies—Shell and ConocoPhillips were early leaders—is spreading with the advent of fiber-optic systems that can be inserted for a few days in a well.

One competitor in the business is Ziebel, which deploys six fiber optic cables inside a tough carbon-fiber rod that is less than an inch in diameter and has been used in laterals as long as 12,000 ft.

Another option in this small, growing sector is companies measuring perforation effectiveness by imaging perforation wear, such as EV, which takes pictures, and Dark Vision, which uses acoustic imaging allowing it to “see” in wells filled with murky fluids.

Meanwhile, companies are seeking lower-cost options. A paper delivered at the conference by Devon Energy suggested a way to measure well-to-well pressure interactions using pressure changes in a non-producing well as a sensor during fracturing.

He said the cost of Ziebel’s insertable fiber as less than $200,000 for a couple days of sensing plus added times to insert and remove it. That significant cost looks low compared with the cost of running a series of pilot tests on wells, which can exceed the cost of installing fiber outside the casing.

Insertable fiber optic offers a way to check into multiple wells in formations for operators concerned about how closely they can space wells without damaging consequences, or how results change due to geological changes in these highly variable formations.

When evaluating a design in a well, operators need to consider if the results are due to variations in the well caused by changes in the rock or a well path that left the productive zone.

“We assume it is one parameter from heel to toe, but oftentimes it is not,” he said.