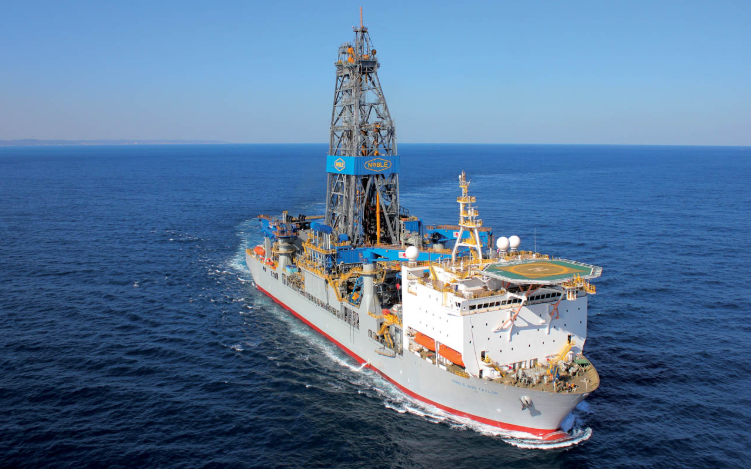 ExxonMobil has used the deepwater rig Noble Don Taylor to drill off Guyana as a test site for its drilling automation program. Source: Noble Corp.

ExxonMobil’s rig automation experiment is accelerating, with plans to push the number of rigs in the system from three to nine.

So far, they have shown it is possible to drill more efficiently by using an automated pipe-handling system that has reduced the median time required for connection at one location by 20%.

That required coordinating the systems required to safely and efficiently pull the drillstring off bottom, set the slips, add another stand of pipe, release the slips and smoothly return to drilling.

Now they are working on drilling a stand. That requires ramping up the pumps, rotary, and weight on bit (WOB) to drill the down without dysfunction, and then ramping down the WOB, rotary, and pumps to repeate the process.  This also includes back reaming, measuring torque and drag, and communicating with the measurement while drilling system (MWD).

Those are big steps, but they have a long way to go.

“An early lesson we learned from drilling automation and digital operation is we are in the beginning stages of it,” said Paul Pastusek, drilling mechanics advisor for ExxonMobil, who spoke about the system during the drilling automation symposium held before the start of the IADC/SPE International Drilling Conference and Exhibition.

The early work has been on a land rig in the Permian, a deepwater rig off Guyana, and a production platform rig off Newfoundland. The program is designed to test multiple digital control systems in different environments. The plan is to add another offshore rig plus five more rigs working onshore this year.

A common problem for operators is that the drilling rig is owned by a contractor hired on a short-term basis that depends on systems from service companies sending data using different coding.

Further improvement has been limited by other physical constraints, particularly: cuttings handling with surface equipment, losses with high circulation densities due to higher ROP, and data rate limits of MWD equipment for many hole sections.

The company is expanding the test program because the results so far show the potential, Pastusek said.

He likened it to the first personal computer he brought home. Back then he was thrilled with the potential of the worldwide web, even though the dial-up connection was painfully slow. His wife pointed out he could have looked up a phone number faster using a phone book.

Now phone books are an anachronism, and ExxonMobil is developing a system where it sees the potential to someday turn a well plan into a set of instructions that can be executed by the digital control system

But for now, Pastusek said, he is “not talking about that because we have not done it.”

What they have done is developed a step-by-step process to create a digitally controlled system to automate drilling that has also added items to its to-do list.

A current priority is creating a standard code for the mud-pulse signals used to send data from the bottomhole assembly to the surface. They realized that was a problem when they saw the control system was not adjusting to drill bit data because the company that created the system did not understand the code of another system gathering the downhole data.

ExxonMobil is working on creating a three-bit code for the data needed to detect problems such as excessive axial vibration, stick-slip, and motor stalls. The hard part was convincing theservice companies to agree to use the same system, which it will offer for other companies to use.

Using wired pipe would speed the data flow, but Pastusek questions whether he could justify the cost.

What he is describing sounds like a standard, but he was reluctant to use that word.

“I am not ready to say this is the standard because standards have a way to get in the way of rapid improvement,” he said.

Ultimately the benefit these systems offer is more consistency and quicker and more precise reaction to data than a driller trying to pay attention to many screens and people. The definition of optimization will evolve based on what the industry learns about the relationship between hole quality and productivity.

For example, the company has been using a drilling advisory program offering turn-by-turn instructions for years. He said one rule of thumb incorporated into the program is the pace of advice needs to be limited to once every 10 minutes, and the degree of the adjustment needs to be significantly large.

Charts from the presentation showed they still experience periods of excessive vibration, which can be damaging, while getting to the bottom—both under digital and driller control. Addressing flaws in the system is likely to be a never-ending job. Performance improvement can be a never-ending job.

“Automation is not a substitute for thinking. We need an approach to going to bottom that does not do this,” Pastusek said.

There are two approaches used for digital control: preprogrammed responses, and adjustments based on the slower reactions of learning systems that have used artificial intelligence to learn how best to respond to drilling disfunctions.

Based on the what they have learned, future systems will need a bit of both. While drilling advisors can take a longer, more experienced view of the conditions, there are extreme conditions where the reaction time needed to save a drill bit may be no longer than 20 seconds.

A major goal is to move people out of danger, out of the red zone, on the drill floor around moving equipment, but experience has shown that there are still gaps to fill.

For example, 3 years into the project, the company has just found a machine to replace the human workers who inspect the pipe threads while brushing on dope to ensure the connection is properly sealed.

They have looked at systems that track people on the drilling floor with badges, video monitoring, and LIDAR—a radar-like system using lightwaves. All can do the job but all have limits.

People may not be wearing their badges, or an unauthorized person not wearing a badge may wander into harm’s way. Although badges are not required for video monitoring, its quality suffers in foggy conditions, so a combination of technologies is being considered.

Looking ahead, well control is a goal which seems inevitable, but “it is not on our radar now,” Pastusek said. It will take time to get comfortable with such a system, which will require certifying that the sensors are accurate, the software dependable, and the crews are trained “so when we put it on a rig, it always works.”