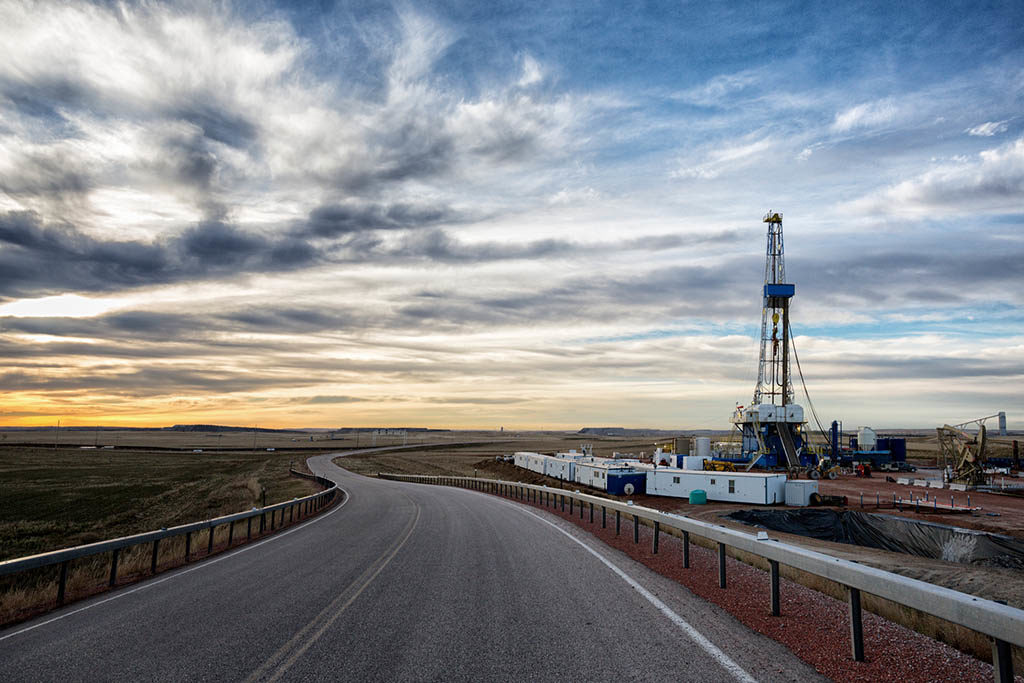 Fallout for the oil and gas industry from COVID-19 and the production volume war that began when Russia walked away from the suggested OPEC+ deal and Saudi Arabia started flooding the market with oil has been rapid and severe. And, it looks as if US shale will be the hardest hit. The total capital and operational expenditure of exploration and production (E&P) companies is now likely to be cut by $100 billion in 2020 and another $150 billion in 2021 if oil prices remain at a $30 level, according to the most recent Rystad Energy impact analysis. The shale industry would carry the biggest burden of this supply shock by taking as much as $65 billion of the $100 billion 2020 spending reduction expected globally.

And, it may get worse. According to Rystad, if no agreement is reached during the next scheduled OPEC+ meeting in June, E&P companies are likely to slash capital and operational budgets to make up for significantly lower cash flows that are expected this year and next.

“Now the E&Ps will turn every stone and cancel every single non-revenue-generating activity. In the US shale industry, as many as 5,800 horizontal wells could be cut in 2020, which would more than half the number of wells from the 10,900 planned for 2020,” says Audun Martinsen, Rystad Energy’s head of oilfield service research.

Overall oilfield service (OFS) purchases, which Rystad previously expected to remain flat year-on-year, are now forecast to drop by 8% this year if oil averages $40/bbl and by 15% in a $30/bbl scenario. If the volume war continues into 2021, the industry could see additional 2021 spending reductions of 7% at $40 oil and 11% at $30 oil. This will be enough to heavily impact service company revenues and could drive some out of the market.

Who Will Be Hardest Hit?

Rystad says the well stimulation market—which is estimated to come down by $25 billion—will feel the most pain in absolute terms in 2020. Fracking and proppant companies will have a hard time securing any new work besides already-contracted deals and some work related to completing drilled-but-uncompleted (DUC) wells.

The second-most impacted segment will be other well-related work such as drilling tools, tubulars, rigs, completion, and intervention work.

If prices stay at $30 in both 2020 and 2021, which Rystad finds less likely, the biggest losers from 2 years of annual market declines will be stimulation services (-40%) and seismic companies (-30%). In this scenario, engineering work also would be impacted, as few new field developments will be planned and inventories for oil country tubular goods would be emptied in an attempt to limit costs.

“Unfortunately, this volume war, if it continues throughout 2020 and 2021, will lead to a massive wave of bankruptcies and consolidation in the service market, whose debt obligations are set to grow 27% into 2021. Companies with low leverage and with healthy order books from past wins in 2018 and 2019 will be able to steer through the storm,” said Martinsen. 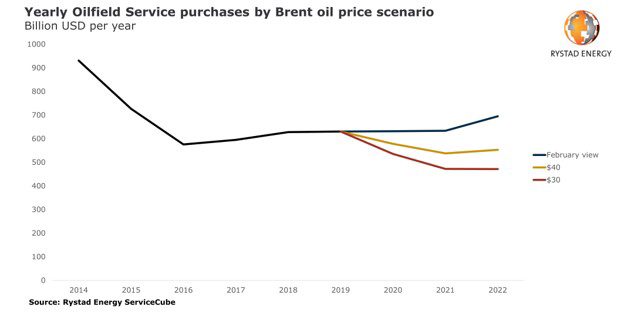 On 11 March, Parsley Energy operating chief David Dell-Osso sent a letter to oilfield equipment and service providers, asking them "to reconsider your pricing" and help the company achieve an "at least 25%" reduction in its costs. Parsley was among the first oil companies to disclose a big reduction in spending plans, saying on 9 March that it would halt a fifth of its 15 drilling rigs by April.

Oilfield services executives expressed displeasure with the requests, according to Reuters, saying many companies are barely profitable at current service rates.

Some oilfield firms have moved to lower their own costs. At Liberty Oilfield Services, which provides well completion services, executives agreed to take a 20% pay cut.

A Sliver of Hope

For anyone looking for a silver lining in this storm, Rystad said there is hope that a deep downturn could finally complete the much-needed consolidation in the market and create a healthier supply chain when prices recover.

Proper lateral and vertical well spacing is critical for efficient development of unconventional reservoirs. Much research has focused on lateral well spacing but little on vertical spacing, which is challenging for stacked-bench plays such as the Permian Basin.