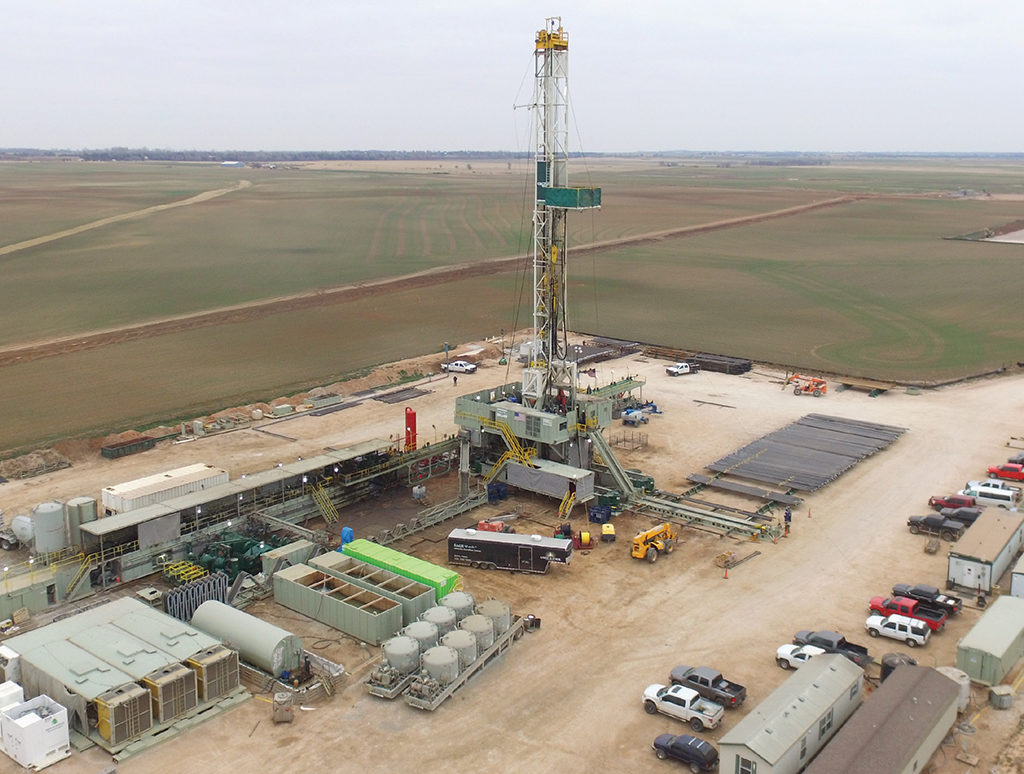 Source: Devon Energy.
The drilling rig in Oklahoma’s STACK tight-oil play that was used to create a four-well pad where Devon Energy said it discovered a “breakthrough” in subsurface diagnostics. The development might be mistaken as an accidental invention, if not for the fact that Devon has been a forerunner in fracture diagnostics for the past several years, and a prolific publisher of its progress in successive SPE papers.

A little over 2 years ago, amid the flat farmlands of central Oklahoma, Devon Energy sent a suite of measurement technologies downhole to study how hydraulic fractures move between wells during the stimulation treatment. The operation in the STACK tight-oil play was what the industry calls a “science project.”

Once the field work was done, and as engineers got to work on the data, they expected to uncover some new learnings. What they did not expect was to find themselves on course to invent a new way to measure the size of fractures, the speed of their growth, and the energy that it took to form them. Knowing these parameters invites the use of the scientific method to control fracture growth for optimal productivity.

The goal of the monitoring project was to marry up data from permanent fiber-optic cables with data acquired by downhole pressure gauges from two wells on the same development unit. Each of the monitor wells was equipped with fiber that ran the length of the lateral. At different points, pressure gauges were ported to the outside of the casing along with gauges that were ported to the inside. All were wired up to the surface.

Engineers at the Oklahoma City-based shale producer had been looking forward to the project because it was one of the first times they would be using fiber optics to measure cross-well strain. A newly established diagnostic in its own right, cross-well strain data have become popular among operators that can afford it because it delivers clear visuals of hydraulic fractures as they come into contact with offset wellbores.

The engineering team wanted to know if the data from the externally-ported gauges, which were touching the rock in order to “feel” pressure buildups, could be tied to the fiber data. Meanwhile, the internal gauges were there to detect any production interference between wells after the completion.

With only around 30 installations worldwide, ADNOC’s onshore team has seen enough results from its first “fishbone” stimulation to embark on a 10-well program that will decide a full development scheme.