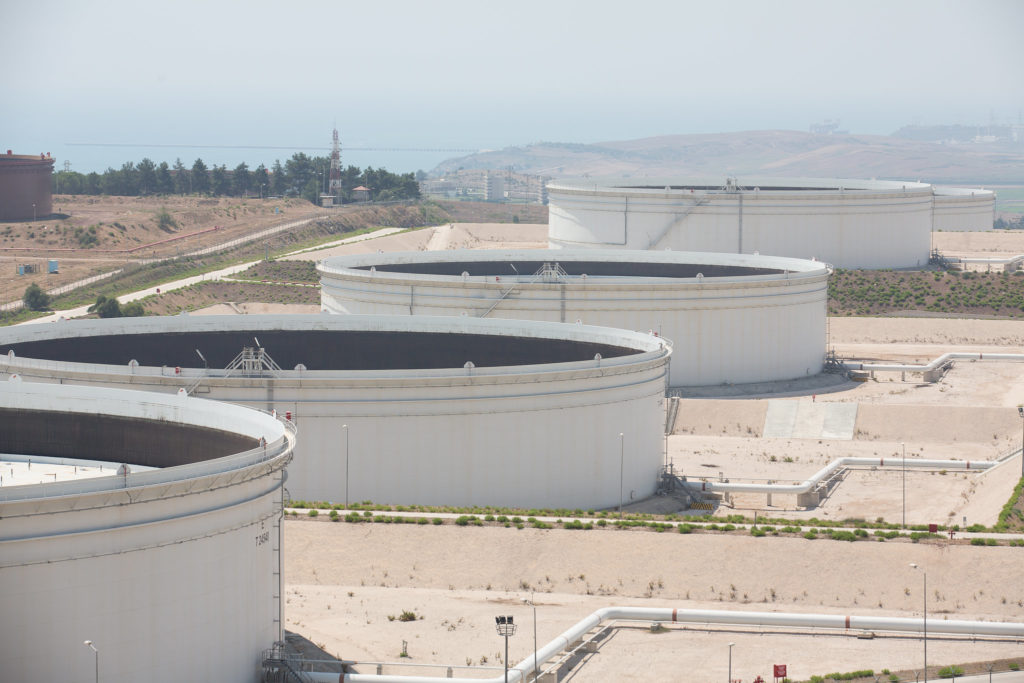 Oil storage tanks are filling fast due to the glut of oil on the market, adding to the reasons to cut production. Source: BP

Last week’s deep oilfield spending cuts proved too optimistic. Now oil companies are rolling out even larger reductions, which analysts say are needed to hold on through the bust.

A small Denver company, Highpoint Energy, said it would defer future activity as its one drilling rig completed its current activity.

Continental Energy said it is cutting its capital spending by 55%, and it will be cutting 12 rigs.

Cuts by those companies will put from 29 to 35 rigs out of work, depending on future oil prices.

"This budget adjustment has been precipitated by the collapse of crude oil prices due to the market manipulation of Saudi Arabia and Russia. Illegal dumping of crude oil by these countries began earlier this month at a time of low demand during this unprecedented pandemic of Coronavirus,” said Harold Hamm, Continental’s executive chairman.

The Wall Street Journal reported the US administration has reached out to Russia and Saudi Arabia to try to settle their battle for market share, which has put millions of barrels per day onto the market at a time when demand is plummeting due to drastic measures needed to slow the spread of COVID-19.

The Continental statement said a US senator from Hamm’s home state of Oklahoma has asked the US Department of Commerce to investigate and take action to stop what it describes as illegal activity. Dumping cases move at a glacial pace, so that tactic is not going to aid producers needing fast relief.

“Survival mode has returned to the oil and gas sector as the oil price rout deepens,” Wood Mackenzie said in a report. While financial statements in the sector are generally better than in the 2014 price crash, management options are limited because “debt and equity markets are all but closed for the US independents this time.”

For oil and gas companies working in high-cost unconventional plays, the goal is to cut quickly to reduce losses that drain cash, reaching a safe spot, known as “cash flow neutrality.”

The first round of capital-spending reductions, most companies cutting capital spending about 30%, were simply not deep enough, according to Wood Mackenzie.

“We calculate an average spending cut of 57% will be required for our coverage if only upstream spend is targeted. A reduction of 41% would be needed across all spend categories, including dividends, to be cash flow neutral at $35/bbl,” said Roy Martin, a corporate analyst for the oilfield data and consulting firm.

That means companies, such as Occidental or ConocoPhillips, can save money by reducing payouts or stock buybacks to investors. A dividend reduction is likely to hurt a stock price, but not nearly as significantly as questions about the company’s solvency.

Life is hard for executives in oil companies—a couple of which have cut executive salaries—but it is worse for service companies with growing inventories of idled equipment.

Budget reduction announcement from oil companies suggest there could be better times ahead.

Diamondback is planning a 1-month break for nine completion crews, After that, it “plans to judiciously reactivate“ three or four frac spreads. That plan is “dependent upon future commodity prices, with the primary goal of protecting the company’s balance sheet and cash flow.”

Looking ahead there could be another reason to produce less oil—the glut is so severe that traders buying and storing crude in hopes of higher prices ahead may have no affordable place to put it.

"Perhaps for the first time in its history, the oil market is about to test storage capacity limits,” said a report from Kayrros. The claim by the market analyst is based on satellite images showing storage worldwide is now 62% full and rising by 3 million B/D toward what it says is a maximum operating capacity of nearly 80%.

However, there is no telling if that trend will continue in a market where the future is murkier than usual.

BP said it would postpone its upcoming Energy Outlook report because it needs time “to consider any longer-term issues raised by current events and to ensure that the key insights from the Outlook are fully incorporated into BP’s strategy.”

As of now, it is “likely” to be able to do so by September, but no date was promised.