Whiting Energy’s bankruptcy filing this week, which will be the first of many, includes a notable executive compensation innovation.

The recent filing killed any hope for a comeback to shareholders who had seen shares drop from nearly $30/share a year ago to 36 cents in trading Friday.

That penny-stock price reflects a deal reached with bond holders promising them 97% stock in exchange for a $2.2-billion reduction in the debt, Whiting reported in the news release announcing the filing.

What wasn’t mentioned in the release was a new $14.5-million pay package for top executives. A US Securities and Exchange Commission filing said the new deal agreed to 5 days before the filing provided Bradley J. Holly, the chairman, president, and chief executive officer, a one-time $6.4-million payment, with the balance split among four other executives whose title begins with the word chief.

Filing for bankruptcy protection was inevitable for the money-losing shale operator. Rystad said it owed $522 million in principal and interest this year, nearly equal to $585 million Whiting said it had on hand, with much more due in 2021.

Many more companies will follow. More than 70 oil and gas operators are expected to have trouble meeting their interest payments if the US benchmark oil price rises to $30/bbl, according to Rystad.

The Norwegian data and consulting firm expects cases to more than double next year if the market stays down.

High oil prices might reduce the toll, but OPEC will be hard-pressed to cut production far enough to bring back $40/bbl oil in a world where demand is in free fall and storage space is running out.

Among those feeling the vertigo of the plunge in oil price shares are the many oil industry professionals and managers holding their company’s stock, which is often a significant part of their compensation package.

That would also be true for top executives at Whiting.

Last year, 70% of Holly’s pay package, worth an estimated $5.4 million, was in the form of stock, according to the company’s proxy statement. For Holly, the stock price drop represented real money, which is what supporters of equity-based compensation mean when they say it aligns the interests of executives with shareholders.

Whiting’s proxy statement shows Holly received stock valued at nearly $12 million over the past 3 years. The shares were restricted, limiting his ability to sell shares as the price plunged.

After a Bloomberg story initially reported the payments to the team days before the bankruptcy, the criticism was brutal.

At a time when companies will be asking workers to do more with less, executives with some oil companies are taking pay cuts. Those include Matador Resources, Parsley Energy, Canadian Natural Resources, and Cactus, according to Longnecker & Associates, an executive compensation consulting firm.

A company blog said that “given the intensity of the spotlight on executive compensation in normal market conditions, a temporary reduction in executive salaries may very well produce an outsized impact on market perception in today’s climate.” 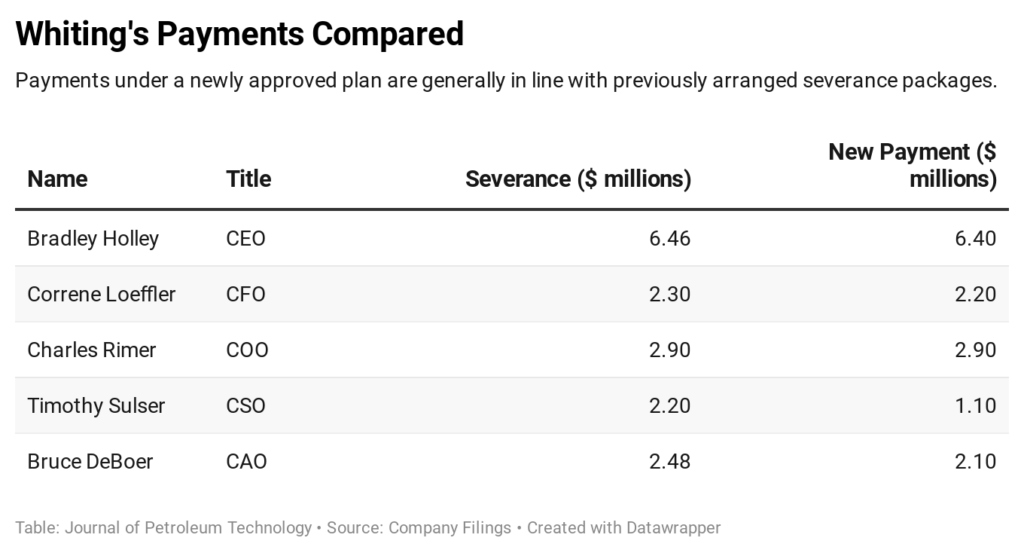 For workers at Whiting and other shale companies, conditions were tough even before the crash. Last summer, Whiting laid off 250 workers, one-third of its workforce, as part of a cost-cutting program to improve earnings.

Whiting workers will continue to get payments under a new Whiting plan up to the amount of they would receive under the “targeted annual compensation program.”

The announcement said the circumstances leading to the recent crash “rendered obsolete the Company’s previously adopted 2020 variable compensation program and made it virtually impossible to adopt new performance metrics.”

The company did not respond to an email to Whiting media contact asking about how it is setting payments now for workers or executives.

While workers will get these payments in four quarterly installments, the top executives “will be paid immediately,” according to the filing.

While no formula was offered for the executive payouts, most are near the level of the severance payments they would have received if dismissed without cause (i.e., if they were pushed out when a new owner took over).

Commonly, golden parachutes generally offer a reward for those shoved out of the company. But in this case, it seems they are being rewarded for staying on board.

The terms of the disclosure also refer to the severance packages. It said the executives must repay these amounts “if the executive voluntarily terminates without Good Reason or is terminated for Cause” over the next year or before the completion of the bankruptcy case.

There is nothing in the announcement suggesting they will lose their ability to then claim the original severance payment.

Creditors do have the ability to object to such payments in bankruptcy court. They can ask the judge to clawback payouts to insiders made shortly before filing.

In this case, it would have been foolish for management to have not included those payments in their deal with creditors.