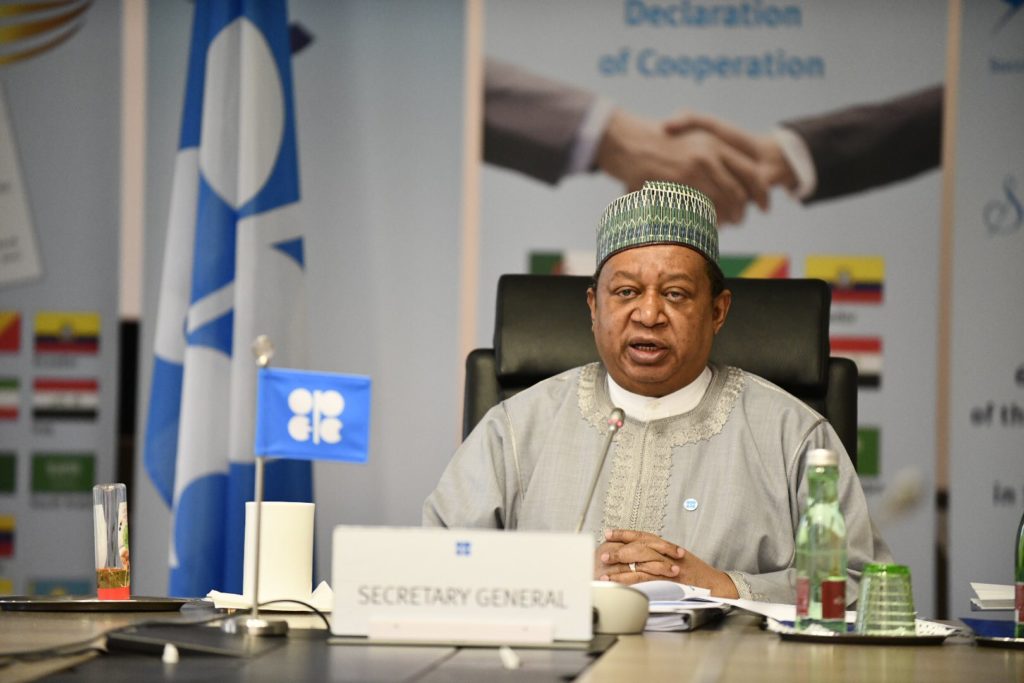 OPEC Secretary General Mohammed Barkindo addressed energy ministers from around the world via a rare virtual meeting in response to travel restrictions imposed due to the COVID-19 pandemic. Source: OPEC

A month-long price war that caused global oil prices to crash at a record pace is winding down thanks to an unusual and historic deal between the world’s major oil producers.

The big moment came after 4 days of negotiations led by the Organization of Petroleum Exporting Countries (OPEC) and its chief outside partner Russia inked an agreement to cut crude output by 9.7 million B/D. The cuts are the biggest OPEC and its allies have ever made—and the first to involve the US.

They will take effect in May and extend through June. After June, output curtailments are to be gently rolled back to 7.7 million B/D starting in July and to the end of 2020. The collation of producing nations will then loosen the reductions to 5.8 million B/D from January 2021 to April 2022. This third phase will be subject to review next year.

Each country’s reduction is to be determined from their October baselines—except for Russia and Saudi Arabia. The two largest producers in the agreement are each reducing output from a baseline of 11 million B/D to 8.5 million B/D.

In urging immediate action, OPEC Secretary General Mohammed Barkindo reminded oil and energy ministers from more than 20 nations that at current levels of production the world’s crude storage capacity will be topped out by May. “There is a grizzly shadow hanging over all of us,” he said. “We do not want this shadow to envelope us. It will have a crushing and long-term impact on the entire industry.”

Considered an essential step toward stabilizing crude markets, the agreement did not come without some dramatics. Mexico, a key partner in the so-called OPEC+ group, refused to commit to its proposed cut of 400,000 B/D, instead saying it was working with the US to share a combined cut of 350,000 B/D. The US, meanwhile, had never previously participated in a coordinated cut led by OPEC.

US President Donald Trump said he agreed to “help Mexico along” by assuming the lion’s share of reductions requested by OPEC. The decision by the US to intervene came as a surprise to many observers. “I was going to pick up the slack, and they would make it up to us at a later date,” he added, indicating that Mexico could repay the favor in “a different form.”

In the end, the informal arrangement proved to be just what the coalition of producers needed to hear to grant Mexico its wish to cut back just 100,000 B/D. On Sunday, 12 April, the deal was approved by OPEC+ which moved its official reduction target from 10 million B/D to 9.7 million B/D to reflect the arrangement.

“It would not have seemed in the cards three weeks ago that something like this could possibly happen,” commented Daniel Yergin, the vice chairman at IHS Markit. “Among other things, it reflected a pivot on the part of President Trump from focusing on low gasoline prices to focusing on the national security implications of devastating the US oil industry. Low gasoline prices are not a big thing at a time when most everybody is at home and can’t drive anyway.”

It remains unclear how or if the US will enforce its share of the promised cuts. Unlike many nations, the US federal government has no mechanisms to enforce such curtailments. This power belongs only to a small number of states such as Texas and Oklahoma which rarely use them. Oil companies are also outlawed in the US from colluding on production cuts to raise prices.

But the US may not have to do much to impact the world’s supply picture. During a call between G20 nations last week, US Energy Secretary Dan Brouillette said in his opening remarks that he expects US production to fall off by almost 2 million B/D by the end of the year. “Some models show even more dramatic figures, up to 3 million barrels per day,” he said.

The extraordinary meeting of OPEC and its confederation of unofficial allies known as OPEC+ negotiated the cuts via a virtual meeting in response to the COVID-19 pandemic. The meeting represented a do-over from one held in early March where OPEC+ failed to reach a settlement.

OPEC shared with Russia its plan to cut a comparatively modest 1.5 million B/D. It was a deal that Russia would refuse, and in doing so, it set off a price war. Saudi Arabia responded by discounting exports and throttling production to a new record of 12.3 million B/D. In the ensuing weeks West Texas Intermediate (WTI) prices fell to a low of around $20, marking a record 65% quarterly drop.

Though it counts as the largest proposed cut in history, the OPEC+ reduction of 9.7 million B/D is seen by many as a drop in the bucket. Set to take effect next month, the cuts address only a portion of even larger and unprecedented oversupply that on the high end is estimated to be moving swiftly toward 35 million B/D. Deeper cuts of between 16–20 million B/D were discussed going into the meeting but were never considered to have a serious chance of finding consensus.

Signaling that the OPEC+ cuts remain too small to balance supply and demand, WTI futures remained in the low $20s when markets opened Monday morning.

"The market has sobered up to the demand deficit and would not boost prices further. If, however, indications that G20 will join in with more cuts of up to an additional 10 million B/D prove true and take an official character, then we can expect a relative price recovery," commented the oil market team of Rystad Energy in Oslo. "Still, due to the stock build that April will have accumulated by then, prices will not recover this year to pre-COVID-19 levels, even in a more balanced market, as it will take some time for the stocks to fall back."

How Will Others Join In?

Among the biggest questions unresolved is if and how some of the world’s other top producers will join the rest of OPEC+ in organized cuts. During the call between G20 nations, Brazil’s energy minister said Petrobras has already pulled back its crude exports by 20%.

OPEC+ has made clear its intentions to expand overall reduction in supply by also enticing the US and Canada, the largest and fourth-largest crude producers respectively, to follow with their own curtailments. There remains some skepticism over the contributions each country will muster up in the short term.

In the longer term, as was highlighted by its top energy official during the G20 meeting, the US could see declines of 2 to 3 million B/D just from so-called “organic declines” that are the result of existing wells drawing down or being shut in voluntarily.

Alberta’s Premier Jason Kenney said this week that OPEC+ has not asked Canada to take part in curtailments, telling reporters that, “The main concern in OPEC+ is that North American producers not surge production to occupy the space created by their own curtailment, should they do it.”

The Railroad Commission of Texas, the state’s oil and gas regulator, is divided on whether to enforce its ability to institute cuts via laws not enacted since the 1930s. US output could also be drawn down voluntarily—natural decline rates, a reduction in drilling, and elective shut ins of producing wells.

Only a handful of shale producers in the Permian Basin have called for regulatory enforced actions. Among them is Pioneer Natural Resources’ Chief Executive Officer Scott Sheffield who is asking Texas regulators to force large producers to shut in at least 20% of their output from May to September. Executives at Parsley Energy have also voiced their support for this plan.

At least a dozen other large shale producers are lobbying the Texas and US government to not step in, calling such actions “unwarranted” and “short-sighted” in letters filed to regulators this week. This group includes EOG Resources, Occidental Petroleum, and Chevron.