How long will it be before Texas producers run out of places to store oil? Will it be next month, mid-summer, or never?

Those questions were asked by the Texas Railroad Commission at a marathon online hearing on 14 April, as it considered whether to return to setting production quotas to push up prices.

The three-member commission that regulates the Texas oil business heard disparate industry opinions as to whether it could and should try to aid Texas producers at a time when demand has collapsed.

Some free-market conservatives like Harold Hamm, executive chairman of Continental Oil, have switched from pushing for removal of regulations to calling for a return of production reductions to stabilize the market.

Storage limits loomed large because they set a hard production limit of production for many small- and mid-sized producers who could be forced to halt operations and add to the mass layoffs in the service sector.

“There is no reason to run full speed into storage gridlock,” Matt Gallagher, president and chief executive officer of Parsley Energy, said. Parsley was one of two companies asking the regulator to return to production quotas.

There were plenty of free marketers on hand to oppose government-set production limits as both futile—Texas no longer can move prices on it is own—and inefficient, saying companies would make better choices than regulators.

It is a brutal process, but they said the fear of storage limits ahead could force cuts that prevent it from developing.

“I have never seen a situation where storage is filled in the US,” Teague said. “I do not accept that thesis because ultimately markets work; someone will offer a price, and the seller will have to decide if they want the price.” 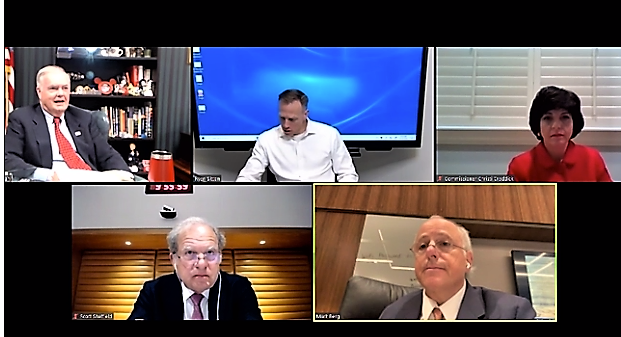 At the end of the testimony, the commission adjourned to consider what, if anything, it will do about the problem. The topic will be on the agenda at its 21 April meeting, according to spokespersons for two commissioners.

Flaring limits proved surprisingly popular with support from more than 16 witnesses, including many in the industry. It would also likely be legal under the Texas law that grants the commission authority to manage production in order to limit waste—bypassing another law that prohibits the state from price fixing.

Backers such as Hamm and Scott Sheffield, president and chief executive officer of Pioneer Natural Resources, described this new version of proration as a short-lived tool to stabilize the market while demand is devastated by measures to slow the spread of COVID-19. It might also serve as a bargaining chip for President Trump when deeper global production cuts are considered.

“The global cut is too small; there needs to be a second cut. Maybe you should participate in a second cut,” Sheffield said to the commissioners during the meeting.

Sheffield asked the group to develop a workable system to recreate a quota-setting and enforcement procedure, which other states would hopefully follow. In the last round of negotiations, he offered production reductions even though the federal government cannot order them. Sheffield said that would be an option if Texas re-creates its system to reduce “on a moment’s notice.”

Opponents said Texas no longer has a big enough share of the global market to move prices.

“We are already cutting and cutting deeply. There will be damage to this industry from this correction just as there has been damage from past corrections,” Lee Tillman, chairman and chief executive officer for Marathon Oil, said, adding that no quota system from the Railroad Commission “will mitigate that damage.”

While year-end US production is looking lower every week—Rystad predicted a 1.5 million B/D drop by then—those warning of storage shortages say the decline has barely begun.

“The Permian was still growing in the first quarter, and most producers were growing” through the end of March, Sheffield said.

On the other side, Tillman cited a US Energy Information Administration report predicting a 400,000 B/D reduction in the US by May.

“Operators are taking the necessary actions to support their own unique business models,” Tillman said, adding that quotas imposed by regulators are “not a particularly effective or fair solution in a market that is strongly responding.”

He noted that the two companies leading the quota push, Pioneer and Parsley, produce in Texas, while Marathon and other big companies have production over multiple states. Tillman said the last wells Marathon would want to shut down are its most profitable ones in the Eagle Ford, but quotas would limit what they could produce.

When asked for testimony about storage limits—a Rystad report said trouble could begin in May and Wood Mackenzie predicted July—Tillman acknowledged that it will be a problem for some producers.

“Storage is one of those market factors that we have to contend with. The most efficient and well-prepared companies will not only survive but thrive in that environment” he said.

For those big companies with firm agreements to ship, store, and process their crude, this is not a big concern, but many smaller ones are seeing a wall ahead.

“It would be naïve to suggest that major oil companies with midstream and pipeline assets will not use them to ensure the oil flows, while the independents are forced to shut down indiscriminately," Alex Cranberg, a petroleum engineer, said. The self-described free-market wildcatter from Midland, Texas, supports production quotas because “this is no time to be doctrinaire” when the “local market is virtually broken.”

Plains All American Pipeline has sent warnings to users saying its storage is limited. When its tanks have reached their limit, its pipelines will only transport oil from producers with a confirmed buyer at the other end.

“We are only taking oil into the pipe that has a home at the other end,” said Harry Pefanis, president and chief commercial officer for Plains All American GP. He described storage as a “shock absorber” in a system where production and demand rarely are equal.

Letters from Plains delivered the warning: “Listen, there is wall coming and you have a chance to be proactive. Think of how you manage production so when the wall hits, you have curtailed the production that is best suited for your company,” Pefanis said.

So far, he said production in Texas has been flat, but Plains has been talking to operators about production reductions during the second half of April.

If storage were maxed out on a large scale—which for safety reasons is around 80% of capacity—it could reduce US crude demand by 3 to 4 million B/D, he said.

If the industry hits that sort of wall, local spot prices could “collapse” to less than $5/bbl, Sheffield said.

While Teague was confident about storage capacity, he said Enterprise is working on novel ways to expand its offerings.

“We are converting wells to diesel and gasoline storage” and have offered to convert old wells to hold crude oil, but no one has wanted to put oil back into a well, Teague said.

No one suggested that the market-based treatment for this imbalance is anything but painful.

“I spoke to many heads of service companies that are hanging on a thread,” said Parsley Energy’s Gallagher. If companies shut down production, “service jobs will all lost. Those jobs, once lost, will not return to current levels.”

"Every producer is feeling this catastrophically” said Todd Staples, president of the Texas Oil and Gas Association, which joined other associations opposing production regulation.

Testimony from RigUp, a provider of labor in the energy industry, cited a Brookings study showing Midland as one of the most vulnerable job markets in the US; nearly half of its workforce could be affected if operators shut down operations.

In the 1.4 million Permian acres managed by University Lands, the number of working drilling rigs is expected to fall from 17 to as few as five by year end, said Mark Houser, the company’s chief executive officer.

University Lands expects to generate $500 million this year to support the two largest Texas university systems, down from $1 billion in 2019. That is an indication of how the oil-price collapse will affect governments in Texas and other states that depend on oil income.

University Lands is trying to reduce the financial pressure on oil companies by reducing the number of wells they must drill and complete in order to hold on to leases.

Still, if prices stay this low, Houser said 100 companies it does business with could be insolvent by next year, based on an industry survey by the Federal Reserve Bank of Dallas.

The calls for urgent action to keep the industry from hitting that wall are directed at an organization that is not built for speed.

A former executive director of the commission, John Tintera, warned that the time and money needed to develop the regulations, hire people, and develop systems to manage production exceed the commission’s limited resources and the timelines of those calling for rapid relief.

A field staff and a near-real-time production tracking system are needed to enforce quotas based on a law that raises the question: What is waste?

Commissioner Brian Sitton asked nearly every witness for a definition of waste, but they could not reach a consensus; this tedious exercise mattered because a quota system is likely to face court challenges.

In a world where shutting in some wells may damage a reservoir, creating a workable system is tricky.

“If you do this for 30 days or 30 years, the same quality of work is needed,” Tintera said.

Some say waste occurs when the price is so low that producers lose money or when the industry suffers storage gridlock. Others say that all oil is used by someone—no one flares oil—so there can be no waste.

The production-reducing approach with the most diverse support was a strict limit on flaring permits. This would slow development in fast-growing areas where wells can be hooked up to gas-gathering lines early on.

This approach is supported by environmentalists and free-market opponents of quotas like Doug Suttles, the chief executive officer of Ovintiv, whose development plans are designed to limit flaring. But as low oil prices limit development, flaring is likely to decline anyway; fewer permits would not significantly reduce production.

“We do believe there should be stricter regulations on flaring, but we do not believe that could be done in time to affect the supply in Texas,” Suttles said.

Multilevel Completions in One Trip: Development and Deployment

The complete paper describes the hurdles that have prevented single-trip installation of upper and lower completions in the complex world of subsea and deepwater applications and examines the processes, technologies, and risk-mitigation steps that took a concept from pilot to successful deployment.

The complete paper reviews the results of gas hydrate engineering and production testing studies associated with northern Canada and Alaska.