After liquid fuels inventory peaks in the first half (1H) of 2020, the Energy Information Administration (EIA) said it expects inventory levels to come down for at least six consecutive quarters, which would drive crude oil prices higher. 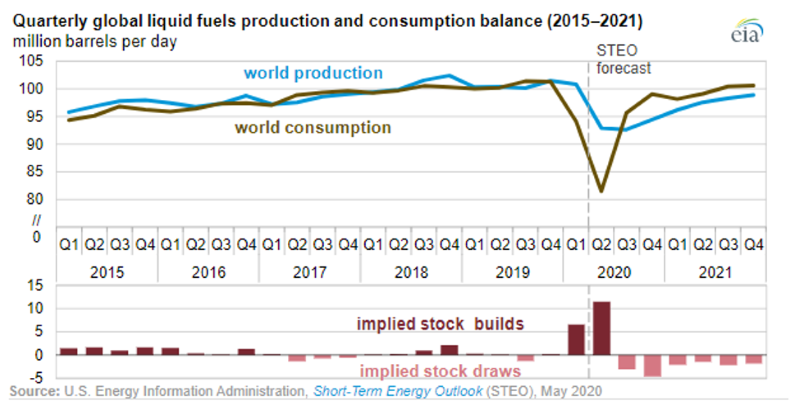 The peak in liquid fuel inventory comes as efforts to contain the COVID-19 pandemic led to a quick and steep decline in global demand.

EIA estimates inventory builds increased at a rate of 6.6 million B/D in Q1 and will increase by 11.5 million B/D in Q2 because of travel limitations, reductions in economic activity, and other declines in demand. Those main drivers were also the basis for lower EIA demand forecasts in March and April.

The build in inventory and the drop in demand come as OPEC+ countries begin implementing production cuts. EIA assumes OPEC members will mostly adhere to announced cuts during the first 2 months of the agreement (May and June). Production compliance will relax later in the forecast period as stated production cuts are reduced and global oil demand grows.

Production is expected to increase later in July in response to recovering global oil demand and prices., EIA expects a gradual increase in OPEC crude oil production from July through the remainder of the forecast, and a rise in production to an average of 28.5 million B/D during the second half of 2021.

Non-OPEC petroleum and other liquid fuels supply will decline by 2.4 million B/D in 2020 compared with 2019. The decline reflects lower oil price forecasts in Q2 and implemented production cuts from non-OPEC participants in the OPEC+ agreement. This year, EIA expects the largest non-OPEC production declines to occur in Russia, the US, and Canada.