As of 12 May, only 339 oil and natural gas drilling rigs were operating in the US, the lowest since the numbers were recorded in 1987—marking a 56% decline (433 rigs) since 17 March. Most of the decrease was in oil-focused geologic plays, but natural-gas-focused plays also saw declines.

Within that 2-month period, 71% (308 rigs) of those taken out of service were in the top three US crude-oil-producing regions: the Permian, Eagle Ford, and Bakken. In mid-March, the Permian region had 405 operating rigs; by 12 May, that number had fallen by 57% to 175 rigs. The Eagle Ford and Bakken regions saw similar declines in that period, losing 64% and 69% of their rig counts, respectively. 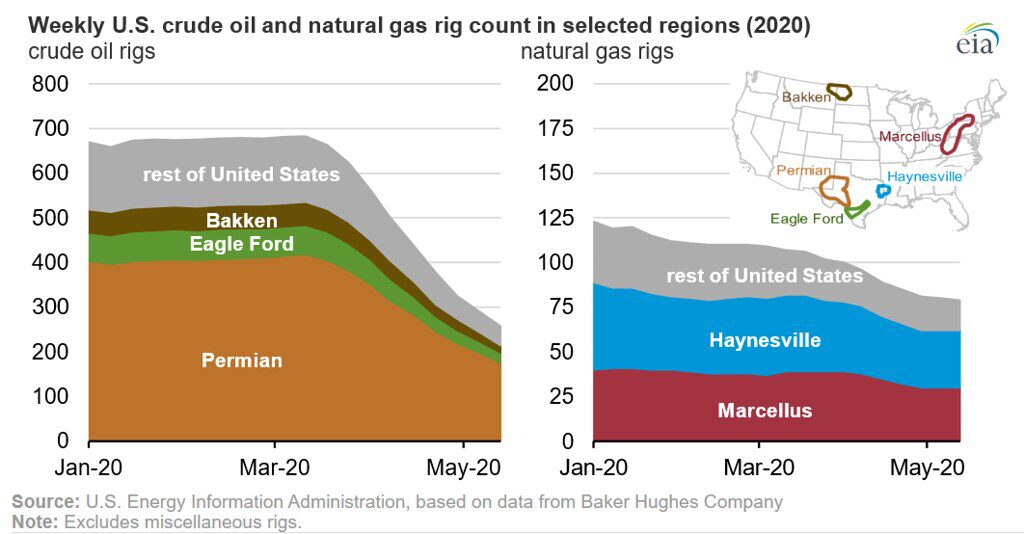 Rig counts have also fallen in natural-gas-focused plays, although those plays had fewer rigs. Earlier this year, the top natural-gas-producing regions were the Marcellus and the Haynesville (not counting the Permian region, which yields much of the associated natural gas and where all rigs are oil-directed). Natural gas rigs in the Marcellus and Haynesville regions declined by 23% and 26%, respectively, from mid-March to 12 May.

Historically, rig counts have tracked with oil prices with a lag time of about 4 months, however, the current drop occurred much more rapidly. The spot price of West Texas Intermediate began March at $46.78/bbl and ended the month at $20.51/bbl. The rig count began to decrease sharply in mid-March, reflecting the sudden drop in petroleum demand associated with COVID-19 restrictions.

Similarly, natural gas rig activity has decreased along with natural gas prices, already at multiyear lows in early 2020. The sustained decrease is because of record-high dry natural gas production in November 2019, low demand because of warm weather, and smaller withdrawals from storage during the winter heating season (1 November–31 March).