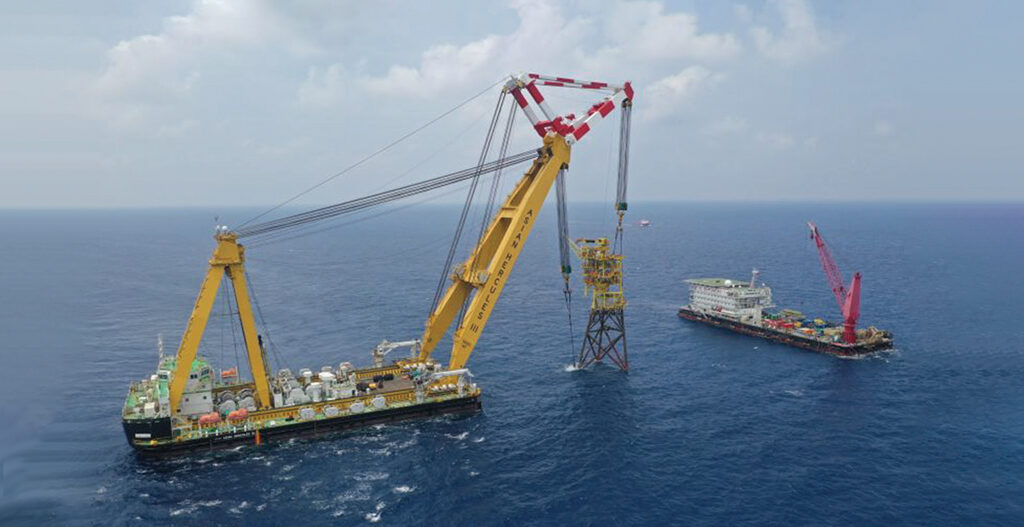 The offshore oil and gas sector has over the decades come to be defined by megaprojects with 30-to-40-year project horizons. But the future of offshore development will depend on the industry’s ability to find innovative ways to cut costs and slim the capital requirements.

Many examples were to be shared with oil and gas professionals at the 2020 Offshore Technology Conference (OTC) in Houston. However, due to the COVID‑19 pandemic, this year marked the first time that OTC was cancelled since its inauguration in 1969.

Despite the global disruption, the flow of ideas continues.

As proof, what follows is a curated summary of some of the papers that were to be presented at OTC. They were selected for their focus on emerging technologies and unique concepts that aim to reduce the cost burden long associated with offshore exploration and development. Their state of maturity ranges from proof of concept to fully deployed.

All 2020 OTC papers are available at www.onepetro.org. 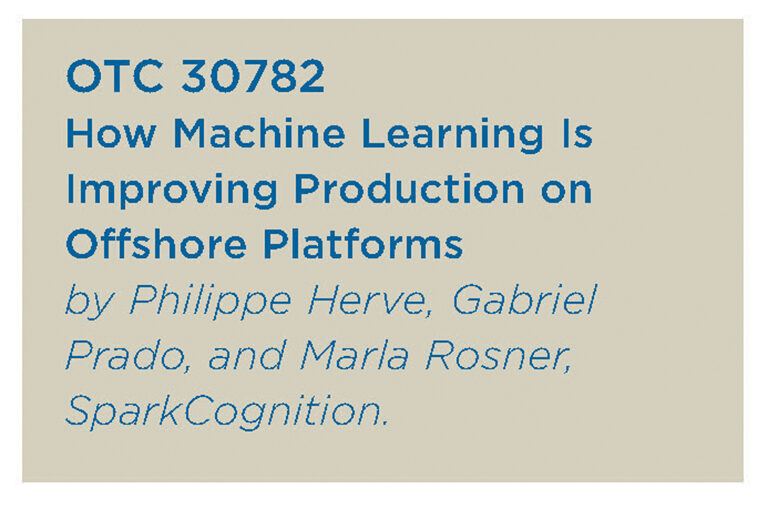 Among the most dominant technology arenas in the oil and gas industry’s digital transformation are fast-emerging machine-learning programs that en-able predictive analytics. This paper (OTC 30782), produced by software developer Spark Cognition, offers two case studies that show how machine learning is being adopted in the offshore sector.

The first involves an unnamed supermajor that “was suffering multiple production-impacting events” involving the gas system on an offshore facility. Conventional methods failed to pick up the signals of failure. The software company was then tapped by the operator to test an unsupervised learning approach.

Years of historical data were run through the program and reorganized so that irregular data sets could be identified and labeled as anomalies. By flagging the anomalies, engineers knew what to investigate; specific tags were helpful in root cause analysis.

“While the solution accurately predicts upcoming asset failure, a significant additional benefit is its ability to identify system or process failure where no particular asset has failed but where a process has become so unstable, the system needs to be shut down and restarted in a controlled manner,” the paper reads.

The proof of concept resulted in a full deployment across the supermajor’s offshore facilities, refineries, and petrochemical plants.

In the second case study, a different oil and gas company was focused on ­lowering the cost of offshore production by $5/bbl. The initial pilot was selected for an unmanned platform that pumped 10,000 B/D of crude slurry to processing facilities. The facility’s chief source of unplanned downtime was a multiphase pump that would go down for a number of reasons, including seal and filter issues.

After a custom-designed machine-learning program and behavior model were aimed at the problematic system, 75% of known historical failures were detected with 2 to 12 days of warning. The first 6 months of the program’s live deployment coincided with the unmanned facility’s longest period of continuous operation. The operator estimates that it gained $500,000 in production value for each day of downtime prevented.

Getting Smaller With Robots 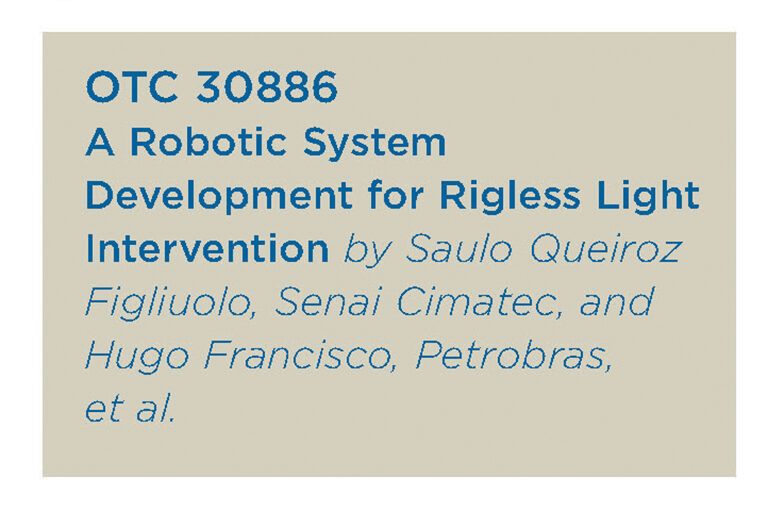 Deepwater well intervention has entered a relative state of maturity over the past decade, providing the subsea sector with untold value by reviving aging or problematic assets. Despite its positive track record, operators continue to avoid subsea well intervention due to the time and costs it requires.

The main cost driver comes from the need to use rigs or specially designed intervention vessels to carry out the delicate task of re-entering a wellbore. Researchers at the Brazilian technology institute Senai Cimatec and national oil company Petrobras think the best way to lower the cost of using these two platforms is to not use them at all.

Instead, let a robot do the work.

In their paper (OTC 30886), the authors describe the creation of a subsea workover robot that consists of two systems: a “cocoon” that protects, supplies power to, and carries the second system; an intervention unit that moves into the production column laden with equipment and sensors. The roadmap foresees using the intervention robot for a number of workover operations that includes gas-lift-valve exchange and plug replacement.

If such a system were available, the industry could rely on its lightest work vessels for subsea intervention. Importantly, this concept may not even require a vessel to maintain station keeping, which would free it up to perform work on other areas of a subsea field.

Inside the intervention unit is a package of computers and sensors designed “to guarantee the precise monitoring of the environment and of the equipment,” the paper notes. Among the innovations involved is a self-localization system that uses an encoder attached to the tractor motor and a magnetic sensor that is similar to a casing-collar locator. Other proposed tool capabilities include paraffin cleaning before testing begins and wellbore-obstruction detection.

With the proof-of-concept robot built and tested in both the laboratory setting and a test well, the developers’ next step is to adjust the design to build a prototype designed for an offshore field test. 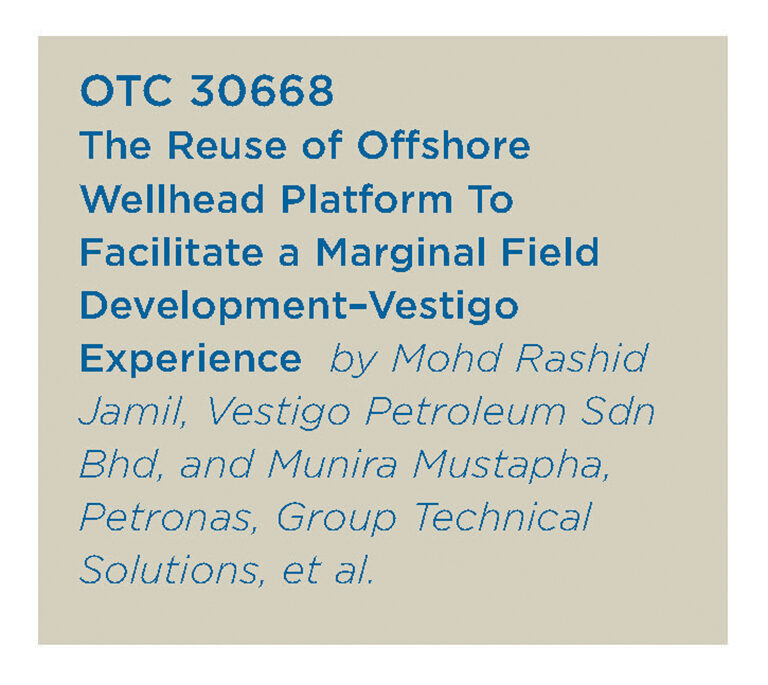 Many of the world’s remaining reserves are locked away in what the industry calls marginal fields. Exploiting these fields profitably has proven over the years to be the mother of invention.

One of the latest examples comes from Vestigo Petroleum, whose engineers overcame the economic barriers of marginal oil fields by using a reusable wellhead platform that connects to a floating production, storage, and offloading unit (FPSO). The deployment of this system was a first-of-its-kind project for Malaysia.

Vestigo—a wholly owned subsidiary of Malaysia’s state-owned Petronas Carigali—is producing from a reusable platform at the Jitang field. Discovered in 2016, the field achieved first oil this past January—just 13 months after the final investment decision was made. The field is about 95 miles offshore Malaysia at a depth of about 240 ft.

Vestigo reports a cost of about $24 million to build the platform, which is unmanned and remotely controlled from its companion FPSO stationed just over 1,000 ft away. Compared to a newbuild, the reusable platform represents a cost savings of 40%. The speed of project delivery would not have been possible without using a platform designed to be reused with few modifications or additional equipment.

The wellhead platform was relocated from its original host field located about 34 miles away from its current home. Production at the previous field ceased in January 2018 after 3 years. The facility has an expected service life of 15 years, which means at the current rate, it could be redeployed to another three offshore fields before retirement.

The only new pieces of major equipment required to redeploy the ­platform at its second field were four new flowlines for each of the new wells. In addition to the overall system design, key to making a reusable platform economic on marginal projects is to have a fine-tuned relocation methodology.

One enabling feature in this regard is the suction-pile technology that the platform uses as its foundation. The suction piles allow the platform to be easily pulled up from the seabed without cutting the piles, the use of oilfield divers, or the need to transfer back to an onshore facility for repairs.

To move the facility, a heavy-lift vessel was required along with a “one-piece, wet tow.” This involves a single operation to lift both the topsides and substructure together, and then tow the partially submerged structure to its new location.

A two-piece, dry tow would have involved separating the two systems and the use of barges for relocation. The latter strategy comes with certain advantages but is overall a more complex operation that would have cost 30% more than the one-piece method. Using the suction piles as a foundation also helps speed the installation process, which Vestigo said takes less than 24 hours compared to other methods that take days.

Replacing Wireline and Downhole Sensors With a Floating Ball 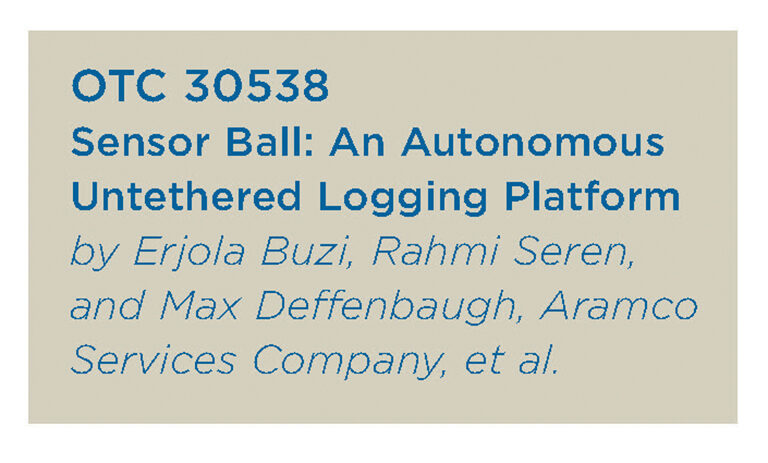 There are two traditional ways to directly measure the downhole conditions of oil and gas wells: wireline logging or permanent downhole sensors. Despite the value of the data, both technologies come with certain complexities, heavy-equipment requirements, and price tags that limit their use.

This drove innovators within Saudi Aramco to come up with a third way that it hopes to use across its prolific oil fields someday.

Called the “sensor ball,” Aramco’s innovation is described in the paper (OTC 30538) as a “small, autonomous platform” that uses gravity to travel down a wellbore. At a desired depth, the plastic-coated ball releases a dissolvable metal weight to switch its buoyancy from negative to positive.

Once the weight is fully dissolved, the ball floats back to the wellhead where it is plucked out and its data transmitted wirelessly to a laptop or cellphone.

Aramco developed the first prototypes in 2016 at its research center in Houston before running tests of the newest design in a pressurized water well in Saudi Arabia. The company reported that the sensor ball effectively logged pressure and temperature during these runs. The deepest test was about 3,600 ft which required a round trip of more than 3 hours.

The innovation is promising but not fully rendered.

Aramco said the margin of error on depth measurements is about 2%—amounting to 100 ft of uncertainty in a 5,000-ft deepwater well. Casing-collar location technology may address this shortcoming. A new version is being built to withstand high temperatures and pressures up to 10,000 psi. 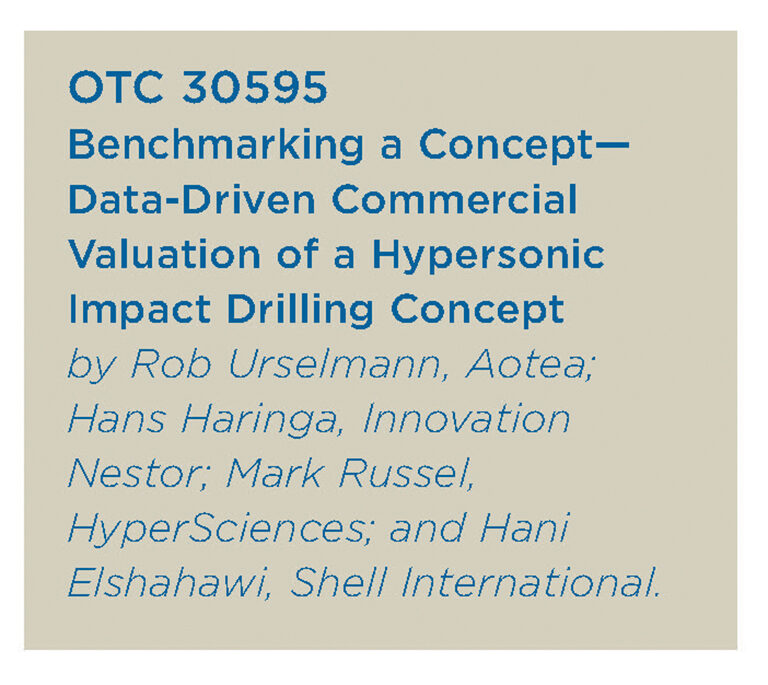 This paper (OTC 30595) underlines the importance of using a fine-grained vs. a broad-brush approach to evaluate an emerging technology’s market demand. The subject of scrutiny in this study was a hypersonic impact technology developed by HyperSciences, which is partly funded by Shell’s GameChanger innovation program.

The hypersonic impact-drilling concept creates a borehole by shooting “penetrators” faster than the speed of sound at hard rock from the surface. This requires the borehole to be on vacuum and is done multiple times to deepen the hole. Thousands of shots would be required to drill a single well.

At hypersonic speeds, “the strength of materials is so small compared to the stresses upon impact that both impactor and target are significantly ­eroded and may be in part vaporized,” the paper reads.

Shell, HyperSciences, and a pair of technology consultancies relied on data from more than 60,000 wells from more than 100 operators to help assess the application spectrum of this unique approach. Using this database, a “synthetic” time-depth curve was built to see where the hypersonic system would remove nonproductive drilling time.

Assuming the technology concept was in a mature state for the past 10 years, the authors asked, “what would have been its indicative unrisked commercial value relative to existing technology?”

The evaluation model suggested hypersonic impact drilling could save around $4 billion over a 10-year period on more than 2,300 applicable wells. This model also found a potential savings of more than $20 million on half a dozen wells, and after 1,000 wells, the value-creation factor fell to $1 million per well. After 2,000 wells, the savings dropped below $10,000.

In the end, the work also suggested that the technology developer make a pivot to expand the system’s application base. This led to the current iteration of the technology which will launch the projectiles through a bottomhole assembly and the drill bit instead of from the surface. The model found that if this could be done, the number of applications for hypersonic impact drilling increases threefold and its value creation jumps by a factor of 3.5.

The court said it was mindful of the disruption the shutdown will cause but said the seriousness of deficiencies from the US Army Corps of Engineers outweighs the negative effects of shutting down the pipeline.