Some well-testing operations are executed by performing multiple runs in hole using slickline and coiled tubing (CT). A technology has been developed that combines many of these operations, including contingency stimulation activities, into one run. The complete paper introduces the major system components and reviews challenges associated with design, manufacture, and testing.

Developing and Qualification Testing of the Tool

Before engaging in the tool-development process, the following major operational requirements were identified and confirmed: 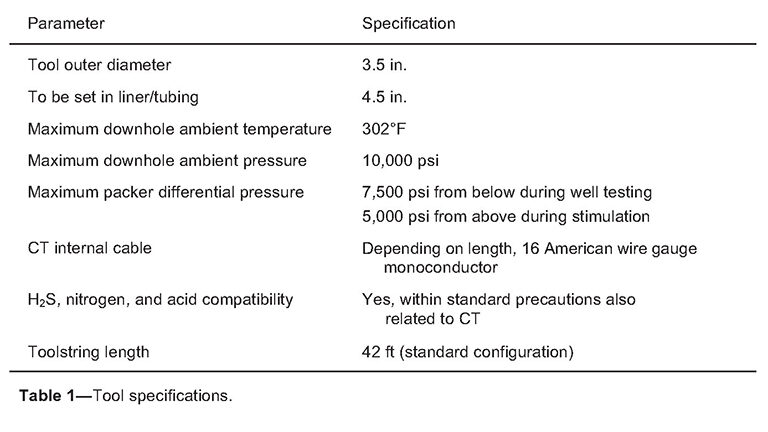 Primary components and specifications of the tool are provided in detail in the complete paper. Fig. 1 shows the tool [known as the e-drillstem test (e-DST) tool], while Table 1 provides specifications.

Following qualification testing but before the first field application, a system-integrity test was performed with the CT service company. Special attention was paid to verifying all interfaces between the downhole tool and the supplier of CT equipment and processes. The verification of operating the new tool through the full length of cable (inside the CT) was tested thoroughly. Significant calibration was expected, required, and performed because the monoconductor cable is used for data communication in addition to tool power supply.

The tool offered several opportunities to enhance the process and met several of the objectives listed in the previous section. Conveyed on CT, the tool may be positioned inside the casing or liner directly above the perforation interval or inside the production tubing. The latter is typically the scenario when the casing is larger than the 4.5-in. production tubing suitable for setting the packer and slips.

When the packer is not set, flow from the well passes the tool externally in a conventional manner. The tool is anchored into the casing or tubing by setting the slips and maintaining a positive overpull with the CT control at surface. By setting the slips, the tool is secured against unintentional movement in the uphole direction as soon as differential pressure across the packer is created. With the packer module activated and the element sealed, two options exist, depending on the position of the shut-in valve.

With the shut-in valve in the closed position, the flow from the well cannot enter the lower flow ports, causing the pressure below the set packer to increase. This stage of the testing program is typically referred to as the shut-in period. As with all other downhole measurements acquired by the tool, the pressure-buildup curve during the shut-in period is observed in real time at surface.

In both options, pumping fluids through the CT from surface is possible. The pumped fluids exit the tool into the annulus through the upper flow ports above the packer. This option typically is used either for pumping nitrogen to assist flow from the well or for placing fluid (such as water) on top of the packer when differential pressure across the packer requires reduction during the shut-in period. The latter is an optional process feature that avoids the need to accept high differential pressures across the packer. In addition, the ability to pump through the CT during flowing or shut-in periods is especially beneficial in wells containing hydrogen sulfide (H2S).

At the end of the shut-in period, fluid is pumped through the CT string and placed above the packer. This process equalizes any differential pressure across the packer before opening the shut-in valve and packer. At the last step in the testing cycle, the slips are unset before positioning the tool at a different depth for additional testing, stimulation, or pulling out of hole. It must be noted that at no point does flow from the well enter the CT string.

With in-house performance verification, qualification, and system-­integrity testing with the CT service company ­completed, the tool was deployed for the first time in an exploration well in Saudi Arabia. The chosen trial well featured multiple perforation intervals or zones, all requiring independent testing. The original program sequence requested a single flowing and shut-in period per zone. Nitrogen lift and the requirement for hydrochloric acid wash and squeeze was a contingency if adequate flow proved to be unachievable.

Zone A featured two flowing as well as two shut-in periods with a stimulation activity in between. For the first time to the authors’ knowledge, a direct comparison of the well’s response before and after stimulation is available in real time without having to pull out of hole to change to a different service or change the CT bottomhole assembly.

A different option for well testing was used in Zone B. Three flow periods were performed, but only the third was immediately followed by shut-in to obtain the full pressure buildup curve. The first and second flow periods are followed by a downhole pressure buildup period, where circulation of nitrogen through the CT was stopped and the well remained open at surface. As a result, the fluid level in the well, monitored in real time, increases. Notably, the two pressure buildup periods mark the lowest bottomhole pressures recorded during the testing process, thus maximizing the pressure range that is built up by the reservoir. Having analyzed the initial shut-in data, the reservoir-engineering department requested the two different-duration pressure-buildup tests.

In total, the two new tools deployed on the trial well recorded and transmitted high-quality data on three zones of interest for more than 230 hours.

This article, written by JPT Technology Editor Chris Carpenter, contains highlights of paper SPE 199853, “Development and Testing of an Electrical Drillstem Testing Tool Conveyed by Coiled Tubing With a Real-Time Control and Acquisition System,” by Michael Affleck, SPE, Aramco, and Monika Bakke Malmin and Per Egil Almas, Target Intervention, et al., prepared for the 2020 SPE/ICoTA Well Intervention Conference and Exhibition, The Woodlands, Texas, 24–25 March. The paper has not been peer reviewed.

The papers summarized in this year’s feature demonstrate the application and versatility of coiled-tubing-based solutions to different phases of a well’s lifecycle, from exploration through production and, finally, to abandonment.

The complete paper discusses an advanced matrix-stimulation work flow that brings reliability and flexibility to the acidizing of tight carbonate water injectors and has delivered injectivity improvements tight carbonate onshore reservoirs in the Middle East.