One of the newest and most-advanced techniques developed to make real-time hydraulic fracture design possible is now a software-as-a-service. The innovation comes from Devon Energy which after months of anticipation has finally commercialized its patent-pending completions method, called sealed wellbore pressure monitoring (SWPM).

Since developing the method, the Oklahoma City-based shale producer has been sharing it with a relatively small but growing circle of other North American operators in a data-exchange program designed to accelerate the technology’s proving-up period. A new exclusive deal announced this week means that every shale producer will have to go to Denver-based software developer Well Data Labs if it wants to use SWPM.

The development marks a relatively rapid time-to-market for an oilfield technology considering the technique was invented in 2018. But interest in it has been elevated ever since Devon began sharing details which culminated with its presentation at the SPE Hydraulic Fracturing Technology Conference in February. The OnePetro paper (SPE 199731) that describes the method and case studies is one of the most-downloaded of the year.

As the name implies, SWPM relies on a nonperforated wellbore among a pad of wells being stimulated. As new fractures approach from treatment wells and then physically move past the sealed wellbore, a pressure response is recorded. This response allows subsurface engineers to quickly determine the volume of fluids placed between wells and achieve better fracture cluster efficiency.

Obtaining such detailed reservoir and fluid-placement information in real time or near real time is considered a stepping stone from static completion designs to stage-by-stage designs, and finally to on-the-fly designs where monitored reservoir responses influence second-by-second decisions.

Kyle Haustveit, a senior completions engineer at Devon and one the developers of the method, said in a press statement, “SWPM will serve as a critical step toward real-time completion optimization allowing operators to customize every stage of their completions to maximize the value of their wells.”

Well Data Labs has been a fixture of the completions data analytics space since the firm started up in 2014. Reflecting a general shift in the completions sector, the software firm released its own real-time data service just last year.

Joshua Churlik, the chief executive officer and co-founder of Well Data Labs, said the SWPM service “was designed to be an important fracture diagnostic tool in the same realm as microseismic and fiber optic.” And since the SWPM technique is technology-lean, he added that the data it delivers on fracture interactions come “at a fraction of the cost of comparable diagnostics.” 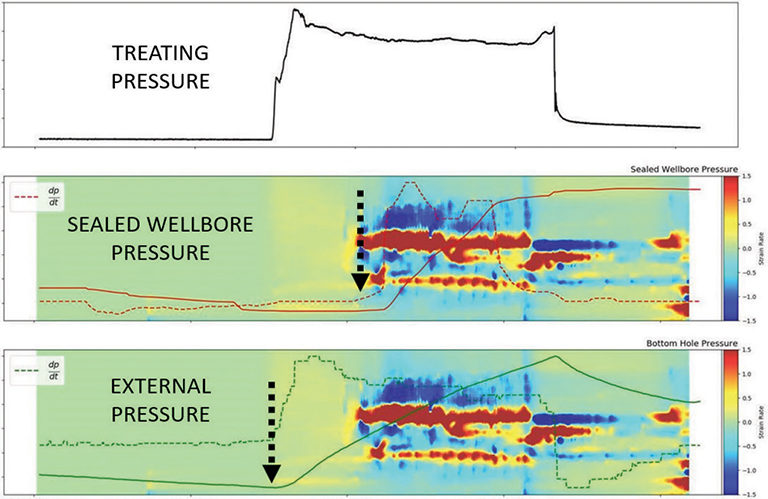 Casing as a fiber-optic proxy. The top chart shows treating pressure from an actively stimulated well over a visualization of fiber-optic strain data. The red areas represent a specific point along the lateral where the fiber detected a tensile region, or an aperture forming around the wellbore. The blue regions confirm this as they represent compressive regions around the open fracture tip. In the middle, sealed-wellbore pressure monitoring (SWPM) shows a pressure inflection just as the fiber detected an oncoming fracture. The arrows illuminate the comparatively early inflection registered by the external gauges vs. the SWPM inflection that is aligned with the strain data. Source: Devon Energy/SPE 199731.

Carbon dioxide (CO2) waterless fracturing uses liquid CO2 to replace water as the fracturing fluid in reservoir stimulation. The continuity and reliability of the blender are key factors determining performance of the operation.

An opportunity now exists to further develop the way we solve problems by adopting agile work flows. Originating from software development in 2001, agile work flows will be a key part of driving the oil and gas industry to its next level of efficiency.

New report offers guidelines for pressure pumpers of the future.