OPEC member countries have agreed to continue their historic 9.7 million B/D production cut until the end of July. The decision came at a 6 June meeting of OPEC and non-OPEC-producing countries.

Beginning on 1 May, the alliance cut production by 9.7 million B/D. The cuts were initially supposed to begin declining on 1 July. July’s production cut will be 9.6 million B/D after Mexico, which accounts for 100,000 B/D, ends its supply constraints saying it remained committed to the group’s prior agreement.

The OPEC meeting also emphasized it was vital that participants, and major producers, cooperating with those cuts remain fully committed to efforts aimed at balancing and stabilizing the market.

OPEC noted global oil demand was still expected to contract by around 9 million B/D for all of 2020.

In addition to continuing arrangements under the April agreement, the participating countries agreed to the following:

“The agreement by the OPEC+ countries to extend their production cuts is positive for oil producers as long as countries meet their obligations,” said Wood.

The meeting also called upon all major oil producers to proportionally contribute to the stabilization of the oil market, taking into consideration the substantial effort made by the same group in an April 2020 agreement.

Rystad Energy’s head of oil markets, Bjornar Tonhaugen said the decline will have short-term effects, as it is not a constant growing threat. but Tongaugen notes the extra curtailments from Saudi Arabia, UAE, and Kuwait are not insignificant, so a decline in prices is justified.

“It would be too good to be true to have a total of nearly 11 million B/D in voluntary cuts extended for a month at times when we see supply deficits,” said Tonhaugen. “Keeping those bonus cuts would just not be justified for the three Gulf producers.”

Wood Mackenzie said the extension would tighten the market further and could see Brent prices rise from $40/bbl toward $45/bbl to $50/bbl.

“The 9.7 million B/D production cuts were already working, extending them an extra month will tighten the market more quickly,” said Ann-Louise Hittle, Wood Mackenzie’s vice president of Macro Oils. “In Wood Mackenzie’s view, the fundamentals show the oil market is recovering from March’s price shock. Supply has shifted dramatically, with total world supply on average for the second quarter down by a steep 6 million B/D from the first quarter of 2020. “

Hittle added Wood Mac expects supply and demand balance to tighten in Q3, which will help keep an additional 2 million B/D out of the market for a longer period.

Meanwhile, Rystad said the OPEC+ production cuts into July alongside forced oil production shutdowns will not only balance global crude and condensate demand but could also create a monthly deficit starting from June 2020 until at least the end of 2021. 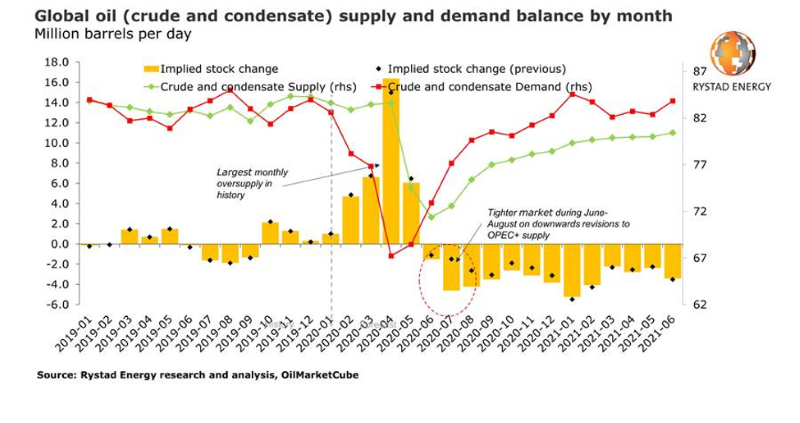 Although the shortfall will ease after that, Rystad Energy estimates that monthly deficits will remain throughout next year.

“We believe OPEC+ is attempting to create a mini-bull-cycle by quickly tightening the prompt market, helping depressed prices and creating a supply environment that will facilitate a rapid relief of oil storages, as deficits will trigger large stock draws,” Tonhaugen said.