While drilling in deepwater Gulf of Mexico, a topdrive failure forced the shutdown of all drilling operations for the rig operator and lasted for 114 hours (almost 5 days). At the time of the failure, the equivalent static density (ESD) was 11.36 ppg and the equivalent circulating density (ECD) was 11.5 ppg. The rate of penetration (ROP) was 100 ft/hr.

It was recommended that there be no utilization of the pumps while drilling was stopped, to reduce the chance of packing off the annulus with cuttings until the rotating and reciprocating could continue. During this time, a 100‑psi backpressure was maintained using the managed-pressure drilling system. Kronos low-ECD synthetic-based mud (SBM) at a weight of 10.9 ppg was utilized during this event.

During troubleshooting and repair work, a 1,500-bbl 11.4-ppg riser cap was spotted. Following the repair of the topdrive, a malfunctioning packer had to be replaced, causing additional delays.

After the packer was set and the blowout preventers tested, the 11.4 ppg riser cap was displaced and subsequently replaced with 10.9-ppg low-ECD mud. The Kronos system was designed and maintained to have adequate suspension properties to maintain wellbore integrity without sag during unexpected downtime, even with cuttings left in the hole. The rig continued to trip into the hole to 9,800 ft. At that time, a ­bottom-up was circulated and a maximum of 575 units of gas was circulated out.

Drilling then continued using a base oil and premix for dilution. The lost circulation material in the background ­continued to be blended into the dilution products being used at the time. During the drilling from 11,636 to 12,845 ft, the decision was made to increase the mud weight to 11.15 ppg.

When the drilling continued from 12,845 to 13,234 ft, formation water was detected from the mud check entering the mud system.

The system was treated to minimize the damage caused by formation water and maintain the properties sought by the operator. To assist in maintaining the desired weight and to prevent low-gravity solids from impacting the mud weight, two shakers were screened up to API Standard 120. At roughly the same time, the mud weight was increased to 11.2 ppg and then to 11.4 ppg.

While continuing to drill, one of the engines that provided power to the mud pumps broke down, reducing the flow rate required to clean the hole. A cement unit was added to the pump to replace much of the volume lost with the broken mud pump.

With continued back reaming through some tight spots to 7,272 ft, operators decided to wash back down 7,938 ft and pump one more high-viscosity sweep. Once the hole was clean, a flow check was performed and operators began to pull out of the hole.

The rheology of the fluid was monitored and maintained for proper hole cleaning and barite suspension. The plastic viscosity, yield point, and gel strengths remained within specification during the interval and were measured at 150°F, 100°F, and 40°F to initiate monitoring of the Kronos flat rheology and low-ECD profile. 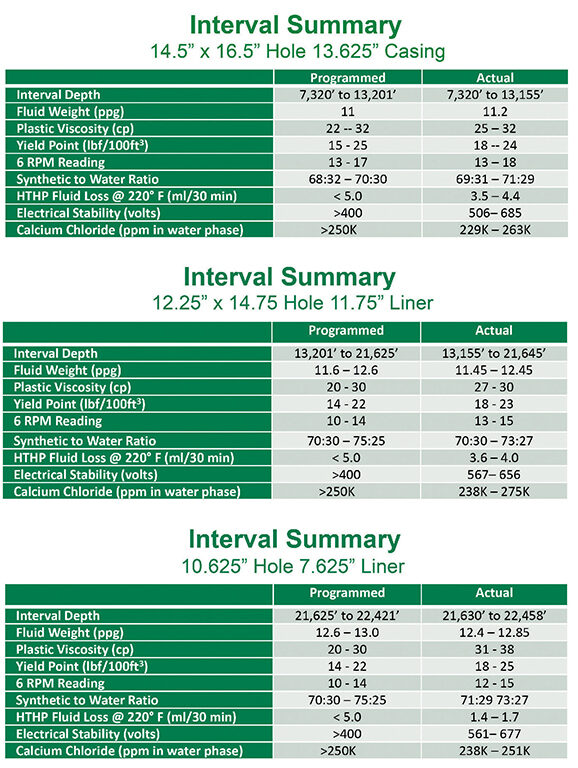 The needed repairs to the topdrive resulted in 5 days with no circulation and the fluid remaining static. After 114 hours of being static, the rig was able to rotate and reciprocate. The pumps were ramped up and cuttings removed from open hole, which was 2,815 ft, with approximately 40 bbl of cuttings to remove while shut down.

A total of three bottoms-up were observed before the hole was clean. No tight spots or torque increases were observed while pulling out of the hole.