Need Cost Cutting and Distancing? There’s a Technology for That 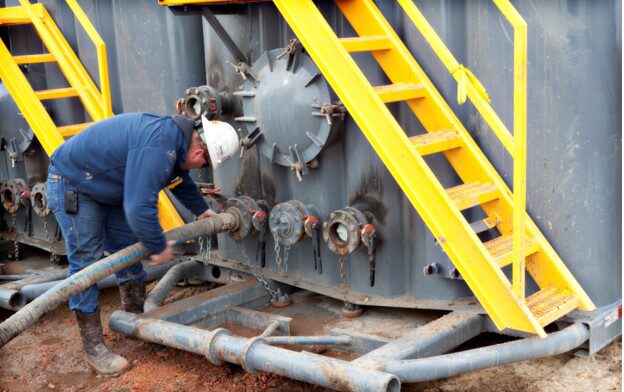 A digital payment system could allow water haulers to focus on handling the water, not the trip tickets. Source: Nuverra Environmental Solutions.

A deliberate industry testing program looking for a system that digitally monitors and manages oilfield payments has been accelerated since COVID-19 forced oil companies to find ways to rapidly reduce costs and human contact.

There was an abrupt change of pace since a 5-month test ended in January of a digital replacement for the cumbersome, paper-driven accounting and payment system used for produced water hauling and disposal.

Rather than having people measure, deliver, approve, scan, calculate, audit, and argue over payments, an industry consortium tested an automated system.

Multiple sensors send data to a blockchain ledger that contains a permanent record for all involved. It also holds the “smart contract” used to analyze the data and calculate payments.

The system combines digital sensors, wireless transmission, and a blockchain ledger system for recording field activity, transactions, and the contract terms. It worked well enough for the consortium to consider further testing and begin thinking how the system might eventually change operations.

Then, the COVID-19 virus and oil-price decline hit, and the pace of the project changed. “The feedback was to accelerate the process,” said Rebecca Hofmann, chair of the OOC Oil & Gas Blockchain Consortium.

What was intended to be a long-term research and development program by the group of 10 big oil companies, is now being pushed toward “implementable solutions” by year end.

This was a big win for Andrew Bruce, chief executive officer of Data Gumbo, the company that provided the blockchain software. After years of trying to convince oil companies to use his software as the data foundation for field automation systems he is getting calls from paying customers.

“Our sales have gone up, driven by people who have to save money and want a more efficient way to do business, and this whole idea of touchless,” due to COVID-19, he said.

“Touchless transactions without having people in the field exposed to each other is an important selling point,” Bruce said.

While COVID-19 will hopefully not plague us forever, pressure to cut costs is an enduring problem. Bruce’s pitch for change can be reduced to a single number: 25%.

That is the estimated potential savings from eliminating the cost of handling and reconciling paper invoices, minimizing the time spent on dispute resolution, and the value of bonuses operators could earn from prompt payments.

“There are companies in town [Houston] with $1 million in unrealized discounts,” Bruce said. Their contracts offer discounts for prompt payments, but they cannot process the invoices fast enough.

Based on the test, Hofmann said 25% is a real number, but the potential impact is going to vary.

Some companies are more efficient and have begun using digital tools. Automation of payment systems could mean job cuts, though after saying as much, employers quickly add that the goal is to find other work for them to do.

It is not easy to put a value on what a worker might be doing instead of pushing paper, particularly engineers. There is no rule of thumb to determine [monetize] the value a sharp engineer could add if he or she had a couple more hours a day to do engineering.

“All of our companies are dealing with less resources than before. They need to be digitalizing,” Hofmann said. And she is not talking about just water. The same digital tools can be used in other operations to track sales of oil or purchases of chemicals or fuel.

Water hauling “is the tip of the iceberg,” she said.

A reason the initial savings are significant is because the paper-driven status quo is cumbersome.

A trucking company’s record of how much water is moved is recorded on a digital trip ticket which is printed out and delivered to the operator’s office where it must be signed, scanned, and sent back so an invoice can be prepared and delivered, said Greg Tipton, CIO of Nuverra Environmental Solutions, the trucking company involved in the consortium test.

Then the company waits for the operator to process the invoice and pay it about 45 days later.

And that assumes things go smoothly. Often enough, there is a dispute over the bill weeks after the fact and that difference has to be worked out based on vague memories.

The consortium test showed it was possible to automate invoicing on delivery day, so the service company can anticipate the amount it will be paid.

“If I can invoice that day when the work is done, it is a huge win for us. Hands down, that beats three weeks for us just getting an invoice out the door,” Tipton said.

The automated system means that rather than reviewing 350 tickets a day, he said they are looking at about 35 where the measurements did not line up.

Water hauling was chosen to test the system because it is a commodity where traditional methods are used to for tracking. It is also a less risky test subject than say, oil, where mistakes can show up on the bottom line.

There are several companies competing to find a way to digitize the paper-driven process.

The consortium’s test, which was put together by Equinor, stands out because of the level of automation that was facilitated by blockchain software.

The automated record, which cannot be altered, provides a standard set of facts in a business in which oil and service companies have perpetually argued over whose numbers should be relied on for payments.

Tipton described it simply as “somebody else’s database you trust.”

The system relied on measures from the tanks in the field, the truck, and at the injection well. If two of the measurements were within 1.6% of each other, the system would authorize a payment, which it did 86% of the time.

Those involved said they can push the accuracy to above 90%.

Comparing measurements forces companies to pay closer attention to the accuracy of their metering systems. About half the time only two of the three measures were available. If they were not within the percentage limit, the trip was turned over to dispute resolution. While direct, reliable, wireless transmission is the goal, methods vary with some data manually entered.

Hofmann said the test partners initially struggled to figure out how to evaluate a system where they were not in control.

The system was so automated there was really nothing to test. Data flowed into a cloud-based system without human supervision. “There were no buttons to push,” she said.

People who have long complained about the time and tedium of reviewing invoices struggled with the loss of control when asset managers would no longer be signing off on the invoices.

To allow consortium members to follow the process, they created a dashboard so they could track the trucks and data used, and if the numbers were close enough, to send out an invoice.

Technologically this is not a big step. Consumers are accustomed to the wireless technology used to remotely read their home electric meter, Bruce said.

A blockchain program is simply an electronic means of securely storing information on transactions plus contracts and other documents related to an activity, ranging from chemical inventories on site to the decisions made by those in charge of drilling.

The water-tracking project is gathering and analyzing a small slice of the flood of digital data flowing in from sensors in the field.

For example, Nuverra tracks the progress of its trucks by recording when they are detected going in and out of the geo-fencing used to digitally secure oil facilities, Tipton said.

He said the consortium’s system fit well into Nuverra’s plan to build customer loyalty by providing them with objective measures of its service.

Not everyone will welcome the unblinking, digital measure of things. There are other ways of doing business. Tipton has seen how “companionships and comradery” can also create lasting oilfield business relationships without such precise data.

“Another barrier is the urge for companies to say all their data is propriety,” Hofmann said. The system depends on all parties being able to see what is going on, which should help them make better decisions and avoid costly disputes.

Any value lost by sharing that data is made up for by the savings associated with automating the process and the ability to check the accuracy of their readings by comparison with others.

Companies in the consortium used a data interface to test how the automated system would work with the accounting, finance, and IT security systems. That led to the 300 comments consortium members offered after the test.

The value of the data gathering, record keeping, and processing will depend on whether  10 oil companies can agree on smart contracts that allow digital payment systems to logically deal with the legal realities in oilfield transactions.

While the contracts do not set the rates, which remain negotiable, there are many other variables to cover. The water-hauling test, which was a small operation, covered 16 scenarios, Tipton said. For example, if the water in a tank came from wells that had seven leases held by seven different parties, billing gets complicated.

Hofmann said the consortium is working on the standards and guidelines needed to make this a “plug and play solution.”

Need Cost Cutting and Distancing? There’s a Technology for That

Denbury Resources needs enhanced debt reduction. The company that does enhanced oil recovery using carbon dioxide it produces and transports has skipped a payment to creditors while it seeks a deal that would reduce its debts.