Texas oil companies have begun putting wells back into production as oil prices have come off the lows that forced mass well shut-ins.

By 20 June, 36% of the responding oil companies expected to have brought back the majority of the curtailed production, according to the quarterly industry survey by the Federal Reserve Bank of Dallas.

The reason for the cuts was simply “wellhead prices too low,” leading 82% of the companies surveyed to act. Since then, the price of oil has gone up, but the comments show people are deeply uneasy about the future. One anonymous writer summed it up: “First, it was dismal during the lockdown. Second, it is/will be miserable during the transition (June–December 2020). Third, it will be somber in the ‘new normal’ (2021).”

“The oil industry went in a deep hole in first quarter 2020. We reached the bottom, and now we are trying to climb up. It will be quite a while (2022+) to get back up the hole to the pre-COVID-19 level of activity and service pricing.”

Those who cut production expect to bring most of it back over the next 3 months, with 88% of the companies expecting to have the majority of it back by this September, according to the survey of Texas and adjoining states.

The most positive response in the survey: 95% of the 157 companies “expect to remain solvent for the next year.”

A 5% failure rate is sobering, but it is better than in past Fed surveys that asked how companies would fare after a deep dip below $50/bbl, which is the breakeven level for many shale producers. 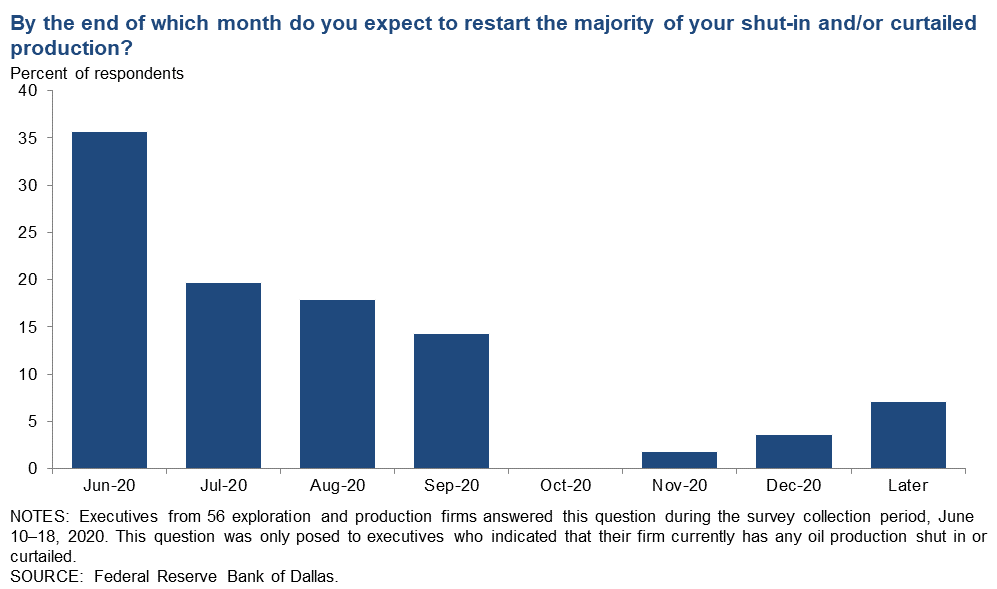 For service companies, 2020 will be a nasty climb.

“We expect to remain solvent for the next year; however, if commodity prices do not recover or decline again, all bets are off,” commented an industry respondent.

Another said, “Remaining solvent for many of us will include making many more sacrifices, trimming salaries, and making other painful steps just to survive.”

Service and supply companies bore the brunt of sharp declines in the indexes tracking oilfield spending and equipment use, which have been sinking for a year now. The cost of oilfield inputs dropped, another negative for them because it suggests operators are demanding and getting discounts on supplies.

The survey confirmed that job cutting has accelerated; executives said they were a bit less deeply pessimistic and uncertain about the future.

Among the things they have realized is that after 5 years of cutting costs to adapt to oil at $50/bbl, they now need to learn to live with oil in the $40s.

When asked to predict the year-end oil price, 80% of the respondents said it will be in the range from $35 to $45/bbl—the price range where the majority expected most producers would bring back production.

Drilling and completion will not be coming back to pre-COVID-19 levels anytime soon. Most of the answers were split between next year or 2022, with a handful saying “never.”

The commenters worried about lenders and investors cutting off the oil business and about oil purchasers deeply reducing their demand and the prices they will pay.

One said that the social isolation imposed to try to slow the spread of COVID-19 has caused a “general malaise.”

“Professional meetings and trade association meetings have been canceled or postponed until 2021. Select groups are holding web-based meetings. However, such meetings lack the personal interactions and exchange of ideas that are necessary for small companies to progress with exploration and to attract new investment.”

A selection of the top JPT reports that you read and shared with other SPE Members this year.

What is to become the largest shale producer in the Permian Basin is stepping up its efforts to curb emissions and has shared new details in its annual sustainability report.

The UAE produced 4 million B/D this year and is looking to these newly discovered resources to reach 5 million B/D by 2030.