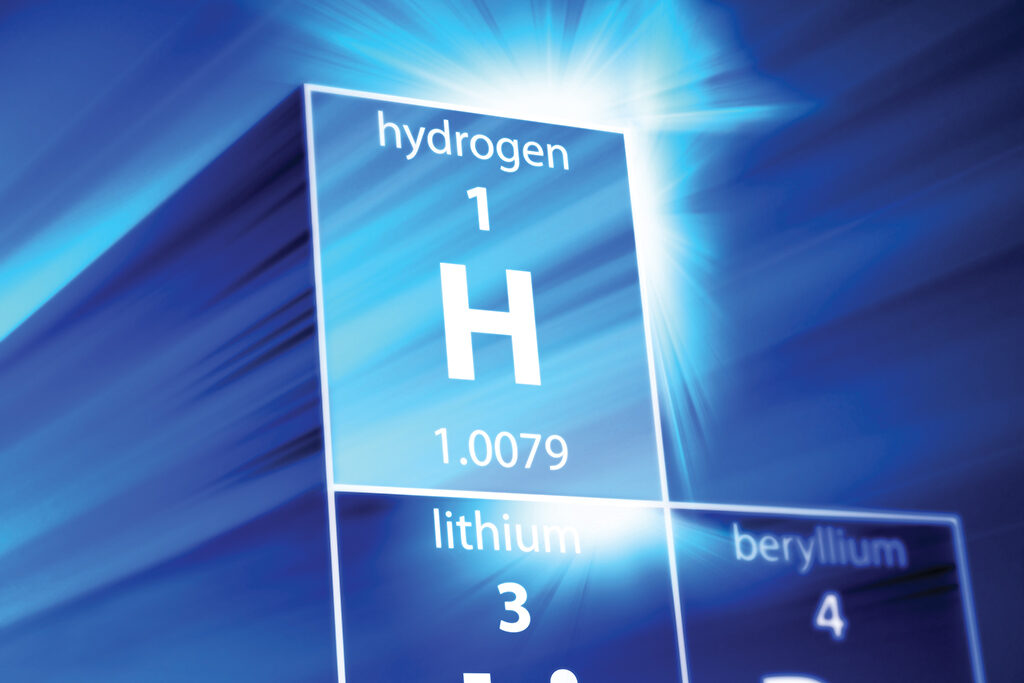 Clean-burning hydrogen (H2)—and scenarios for a future ­economy powered by it—is big news at the moment. This is no surprise, given the current environment of low demand for oil, growing unease over greenhouse gas emissions, and projections that post-pandemic stimulus measures could do for hydrogen what stimulus measures after the 2008 financial crisis did for solar power. Oil and gas majors have spent tens of millions of dollars on pilot projects, as have other industrial giants. Germany, which has allocated $10 billion to its nascent hydrogen industry, is one of a growing number of governments whose spending to satisfy climate commitments while restarting their economies could provide a major funding kickstart.

But for the moment, most analysts agree that the future for a hydrogen economy is still uncertain and that the biggest obstacles to scaling will be costs, technology scaleup, and policy.

Hydrogen is the most abundant chemical substance in the universe, constituting roughly 75% of all mass. Today approximately 3% of global energy consumption is used to produce hydrogen, at a rate of more than 110 million tons per year, according to BloombergNEF (BNEF). So, hydrogen production is already a large and thriving industry. Yet, according to the Hydrogen Council, only 0.002% of currently produced hydrogen is used as fuel. Some 90% is used for ammonia production, petroleum refining, and methanol production.

DNV GL, in a recent report on hydrogen as an energy carrier, describes hydrogen as a unique zero-emission energy carrier that can be converted to electrical energy in a fuel cell two to three times more efficiently than in a combustion engine. Hydrogen as an energy carrier can exist in a variety of forms and can be converted from one form to another, while energy sources such as oil and gas are the original resource from which the energy carrier is produced. Hydrogen can be used as fuel for mobility and heating in buildings; to decarbonize industrial processes; and as price support and storage for excess electricity during periods when production output from renewables alone exceeds demand.

BNEF reports in its Hydrogen Economy Outlook that deploying clean hydrogen in the coming decades could reduce up to 34% of global greenhouse gas emissions from fossil fuels and industry at manageable cost. Renewable hydrogen could be produced for $0.70 to $1.60/kg in most parts of the world before 2050—the equivalent of gas priced at $6–$12/MMBtu, making it competitive with current natural gas prices in Brazil, China, India, Germany, and Scandinavia on an energy-equivalent basis.

When including the cost of storage and pipeline infrastructure, the delivered cost of renewable hydrogen in China, India, and Western Europe could fall to around $2/kg in 2030 and $1/kg in 2050. Kobad Bhavnagri, head of industrial decarbonization for BNEF and lead author of the outlook, said, “In the years ahead, it will be possible to produce [hydrogen] at low cost using wind and solar power, to store it underground for months, and then to pipe it on demand to power everything from ships to steel mills.” (Fig. 1 )

However, daunting challenges exist across the value chain. Hydrogen is generally more energy-intensive to produce, store, and transport than other conventional fuels. According to BNEF, three to four times more storage infrastructure will need to be built at a cost of $637 billion by 2050 to make hydrogen as ubiquitous as natural gas today. Technology and logistical factors that will enable or limit scaling of a hydrogen economy include learning rates for electrolyzers, fuel cells, and other technologies; regional natural gas consumption; development of hydrogen distribution infrastructure such as pipelines and fueling stations; and uptake of carbon capture and storage (CCS).

Hydrogen exists on Earth only as part of a compound, most commonly in the form of water, but also in hydrocarbons. To be produced commercially for fuel or feedstock, hydrogen must be ­temporarily released from its bond with oxygen or extracted from hydrocarbons. As of 2019, approximately three-quarters of the world’s hydrogen was produced by converting natural gas using steam methane reforming (SMR), the primary component of which is methane (CH4). The process also produces CO2. If the CO2 is released into the atmosphere, the resulting fuel is known as grey hydrogen. When the CO2 is captured and buried underground, the fuel is a cleaner alternative known as blue hydrogen.

The cleanest form, green hydrogen, is derived from H2O through a process that runs on renewable electricity. While all three types of hydrogen burn equally clean, green hydrogen has by far the least negative impact on the environment. It’s also the most expensive. The price today can be as much as $7.50/kg, compared to $2.40/kg for blue hydrogen, according to the Global CCS Institute. It’s no surprise that less than 1% of the world’s current hydrogen fuel supply is green.

The consensus is that the future for the current technology is all about blue hydrogen, where the fossil-fuel-based production process is paired with CCS. CCS on industrial-scale hydrogen production has been demonstrated at Air Products’ SMR plant at Port Arthur, Texas, and Shell’s oil sands upgrader in Scotford, Alberta, Canada, and at a demonstration project in Japan.

But CCS isn’t yet widely commercial and needs scaling, too. At the same time, the cost of electrolyzer technology to produce green hydrogen has reportedly fallen by 40% in the past 5 years in North America and Europe, and Chinese-made systems are up to 80% less expensive than those made in the west. Costs will continue to fall if deployment increases.

“Probably you need both routes—green and blue—if you’re really serious about decarbonizing all the use cases,” said Oliver Bishop, general manager for hydrogen at Royal Dutch Shell.

A Sneak Peek at the H2 Economy

A scaled-up hydrogen industry could deliver a benchmark cost of $2/kg in 2030 and $1/kg in 2050 that would make it competitive in large-scale supply chains in China, India, and Western Europe. Costs could be 20–25% lower in countries like the US, Brazil, Australia, Scandinavia, and the Middle East, with the best renewable and hydrogen storage resources. Conversely, costs could be 50–70% higher in places like Japan and Korea, which have weaker renewable resources and unfavorable geology for storage.

BNEF believes that by 2050, with the help of government policies such as funding for research, subsidies for deployment, and a system to put a modest price on carbon emissions, green hydrogen could cost less than a third of what it costs today, and annual sales could reach $700 billion, compared with approximately $1.5 trillion for today’s oil and gas production. The firm draws an analogy between solar power, which ultimately became mainstream after benefiting from post-2008 government investments, and hydrogen, which could benefit similarly from post-COVID-19 stimulus measures (Fig. 2).

One benefactor of a hydrogen economy is likely to be the steel industry, which BNEF said could shed its reputation as a climate threat by using hydrogen instead of fossil fuels for as much as half of global output by 2050. The sector accounts for as much as 9% of global carbon emissions, according to the World Steel Association. “No big R&D breakthroughs are necessary,” said Bhavnagri. “If policy was in place, the world could start producing green steel within a decade.”

Hydrogen could foreseeably also be used for home heating and cooking by blending it at 5–20% volume with natural gas for transport through existing pipelines, or by using polyurethane pipe to move it at 100% concentration. A government mandate that 5% volume in natural gas at any time must be H2 would drive demand, reduce cost, and speed uptake. And, while new appliances would be needed to burn it, the situation is not unprecedented. Bloomberg compares it to the switch from town gas—a hydrogen/carbon monoxide mix that once made up 40% of the heating and cooking supply in London, Sydney, and other cities—to natural gas in the 1960s.

Hydrogen will become more commonly used for transportation going forward, but the consensus is that at least in the near term, it will be used more for trucks and buses and long-haul transport than for cars and motorcycles. In 2019, more than 2 million battery-powered electrical vehicles (EV) were sold globally; today there are still fewer than 20,000 hydrogen-powered cars on the road. Colin McKerracher, head of transport analysis at BNEF, said that one reason battery-powered EVs jumped ahead so decisively is that consumer electronics was scaling up the use of lithium-ion batteries at the same time, which improved their performance and slashed costs. “Hydrogen didn’t have that kind of push,” he said.

Nonetheless, as decarbonization be-comes a larger business opportunity, electrolysis costs come down, and focus extends beyond electronics to molecules, it is likely that most road vehicles will be noncombustion models by 2050, and DNV GL estimates that more than 80% of H2 mobility demand will be for buses, trucks, and other heavy vehicles.

Hydrogen economy is a hot topic at the moment, but what it needs to scale is massive uptake in demand plus cost declines along the value cycle, favorable carbon pricing, and subsidies. Policy is critical, and right now, for the most part, there is not much government policy in place.

“What is needed is policy coordination across government, frameworks for private investment, and the rollout of around $150 billion of subsidies over the next decade,” said Bhavnagri. Even at $1/kg, carbon prices or equivalent measures that place a value on emission reductions are likely to be needed for hydrogen to compete with cheap fossil fuels in hard-to-abate sectors, he said. But if the required policy is in place, using hydrogen could eliminate up to 34% of greenhouse gas emissions from fossil fuels and industry for less than $100 per ton of CO2.

Japan is arguably green hydrogen’s most advanced market worldwide. In 2017, it became the first country in the world to release a strategic government plan for hydrogen and fuel cell technology. It also leads in importing hydrogen for domestic applications such as transport and has established the first international trade routes for shipping clean hydrogen from Australia and Brunei to its own shores. And, not surprisingly, it leads in hydrogen fuel-cell vehicle development, thanks to Toyota and Honda.

Europe’s commitment to set the example for the rest of the world on clean energy is driving a range of initiatives across the EU.

According to a report by GTM Research, a Wood Mackenzie business, the US is barely worth mentioning in terms of green hydrogen development. But, California, it said, is racing to become a world-leading market. Its interest is driven partly by aggressive decarbonization targets, including phasing out of all diesel- or natural-gas-powered buses by 2020, and partly by the presence of some of the industry’s most high-profile developers. Among these, Silicon Valley-based fuel cell maker Bloom Energy is foremost. To that end, Shell and Toyota are working with the State of California to further develop its hydrogen refueling network.

Looking Beyond the Hype

This isn’t the first hype cycle for hydrogen, but this time could be different, as a growing number of countries and ­companies get serious about decarbonization and societal pressures increase. BNEF offers seven signs that could indicate that a hydrogen economy is emerging.

More on JPT Online
Hydrogen from fossil fuels is not only an easier way to pivot to clean energy than going full-on renewables, it could also establish new businesses and generate tremendous revenue by leveraging the oil and gas industry’s existing knowledge and expertise. Read more at http://go.spe.org/H2_Opportunities_for_Oil_and_Gas.