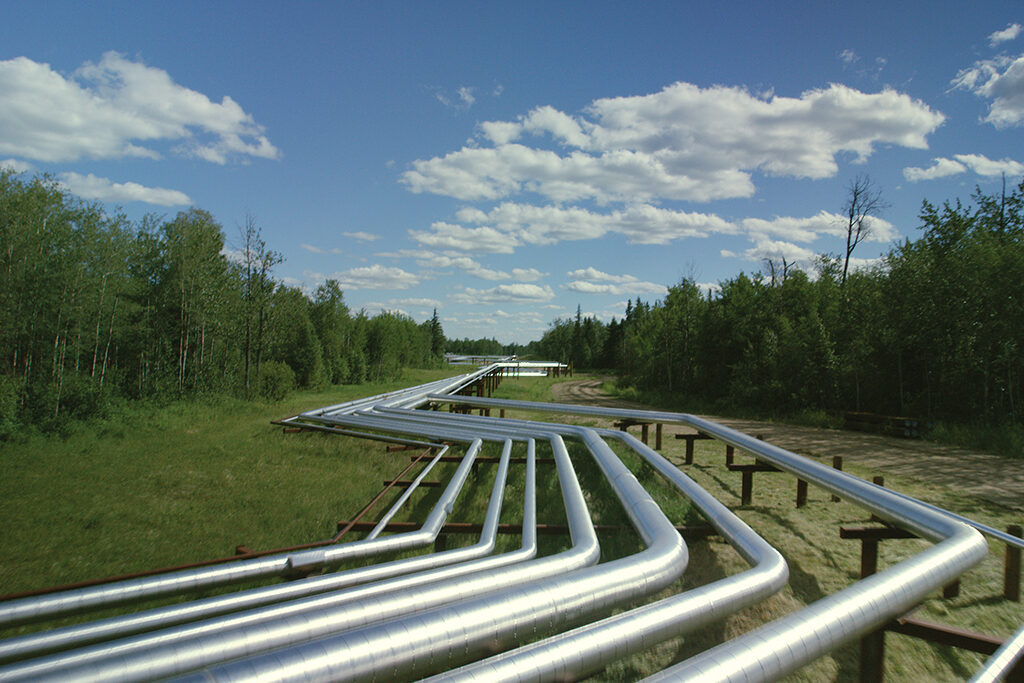 When Matt Fox, chief operating officer for ConocoPhillips, was asked about how the company is managing its 100,000 B/D reduction at its Surmont project, the response was reassuring.

“We’re not doing anything that’s going to take any risk either from a reservoir or wells or facilities perspective. That’s why … in Surmont, we’re going down to a minimum rate, so that we can still provide enough heat and temperature to the steam chambers to keep them intact,” Fox said during a recent call with stock analysts.

To be clear, he is not saying there is no risk. ConocoPhillips and others are using various methods to turn down production that maintain the heat and pressure they spent years creating in reservoirs where pairs of wells are used to inject steam to heat bitumen. Gravity then drains the melted bitumen down to the production well in a process known as steam-assisted gravity drainage (SAGD).

While what they and other companies in the oil sands are doing is ­commonly described as shutting in wells, they are actually slowing the production from those wells. Some use reduced steam injections in a well pair, alternate cyclic injection among wells, or injections of gas to maintain the pressure.

“It is a good test case,” said Scott Norlin, a research associate at Wood Mackenzie. The geologist who used to work in the oil sands said shutting in wells is not a good description of how they are cutting production.

“It is almost like cooking a ­turkey for Thanksgiving,” and dinner is delayed, so “you turn the temperature down. You’re not throwing it back in the freezer,” he said.

Future productivity in wells that have been turned down requires maintaining the temperature and pressure at levels high enough to preserve the steam chamber—the area above the injection where the water vapor thins peanut-butter-thick bitumen so it can flow.

Keeping it hot enough to maintain the steam is critical because if it is allowed to condense into liquid form, it will cause a pressure drop which can open the door for serious trouble.

The minimum safe injection level will vary based on factors ranging from a water layer next to the steam chamber to the age of the well.

Years of steam injections warm the rock around the productive zone, slowing cooling if the injections are stopped or reduced. If there is a water zone in contact with the production zone, too little steam may allow an influx of water, which would quench the steam chamber.

“If we cut the steam rate, but keep it high enough to supply the heat loss, and thus maintain the steam temperature (which means pressure), the production rate will go down, but the steam chamber will continue to exist without resaturation,” said S.M. Farouq Ali, a distinguished professor at the University of Houston Cullen College of Engineering.

Wells must be monitored ­carefully because the rate of reducing injections may be higher than expected to keep steam from turning into a fluid that resaturates the steam chamber.

“If we further decrease the steam rate, the temperature—and hence the pressure—will go down, chamber resaturation will occur, and other uglier things may happen.”

Those uglier things were described by Bruce Carey, a research associate at Peters & Co., whose recent report summarizes the risks of shutting in and slowing down injections:

“As the chamber cools and steam vapor condenses into liquid, the pressure inside the chamber will also be reduced. The reduced pressure can draw warmed bitumen and water back into the chamber, causing a potential collapse of the steam chamber.”

A study by Nexen quantified what can happen when the pressure drops and water comes in contact with the steam chamber.

A relatively small pressure drop in a steam chamber adjacent to top water lowered the temperature by 35°C in 29 days, compared to a 2–4°C drop in a comparable well with a rock seal isolating it from nearby water, the Nexen paper said (SPE 189720).

Water is a widespread worry. “If top water is present and in contact with the steam chamber, the impact can be immediate and severe,” said Carey in a 2020 analysis of shut-in risks. If there is water above or below, a pressure drop “will draw the cooler water up into the steam chamber and further quench the chamber.”

A 35°C decline represents a significant change in wells that generally operate at temperatures from 200°C (1.6 MPa) to 250°C (4 MPa), Carey wrote. The result can be a slow, costly restart.

The Nexen paper said, “The temperature of the thermocouple at (the wells observed) continued to decline when the well was brought back on operation showing the steam chamber was considerably impacted during the shut-in period and would not return to steam conditions for a long time period.”

It concluded that the “data suggests continuous steam injection is crucial to maintain a steam chamber with top water.”

Some slowdowns this year are testing whether gas injections can be used to maintain pressure with less steam or none at all.

ConocoPhillips cut the output at its Surmont project by 100,000 B/D to 35,000 B/D. This includes areas with top water present.

“A pressure imbalance between steam chambers and these thief zones can cause movement of lower-temperature water into the chambers, which would hamper the subsequent efficiency of the process in the future,” Nexen wrote in its slowdown plan submitted to the Alberta Energy Regulator.

Thief zones are thought to be zones with low saturations of bitumen which absorb heat and increase the amount of steam required to maintain adequate pressure in the steam chamber.

”From previous shut-in events in ­Surmont, it has been observed that pressure decline and subsequent pressure recovery on steam chambers can negatively impact the performance and duration of the ramp-up period to return to pre-shut-in production levels,” according to the statement of the regulator.

When it slowed production, ConocoPhillips used noncondensable gas (NCG) to maintain the pressure. While pumped-in gas—typically natural gas—will not add heat, it will not condense if the temperature drops like water, and it allows the pressure to be maintained.

Less or No Steam

ConocoPhillips is one of the companies trying alternative injection methods this year—periodic injection and alternate well injections. NCGs such as nitrogen and natural gas can be added to maintain pressure or may be used alone.

Modeling of production after an extended shut-in by Computer Modeling Group concluded, “More oil can be recovered by a noncondensable gas injection process following the steam interruption. The hot gas chamber continues its expansion after the steam injection stopped” (SPE 185007). The paper did not discuss the risk of water influx.

Pressure and temperature monitoring in the wells will indicate to operators if their slowdown approaches are able to sustain healthy conditions in the steam chambers.

Where water is present above or below, Carey said reduced steam injection may not be sufficient to hold it back in some instances.

“It may be that some operations—presumably without significant water risks—can turn down steam utilization to slow down production sufficiently without risking damage to the steam chamber,” Carey said. In some of those instances gas injections may help, such as in older wells. He is an optimist compared to Farouq Ali on the value of gas. The professor adamantly objects to any suggestion that reduced steam NCG injections will do any good.

Replacing steam with gas, in the professor’s mind, will cause “havoc.” His experience, which includes gas injection for enhanced oil recovery, points out it is extremely difficult to predict where the gas will go. It may help pressurize the steam chamber or create a gas cap or the gas may escape into the surrounding formation.

If the gas stays in the production zone, he said it can interfere with future production because a “10% gas saturation would reduce the flow capacity of the reservoir by 50%, or it may cool the reservoir.”

ConocoPhillips told regulators it will be checking to see if the gas causes the reservoir to cool faster than expected without steam injections, and if that is the case, it will reduce or stop gas injections.

Farouq Ali advises if there is water present, there is no alternative to maintaining the heat and pressure with steam injections.

“Once you choose the project location, the die is cast. Gas injection, solvent injection, and myriad other measures are driven by desperation,” Farouq Ali said.

The simplest way to judge the risk of a deep production cut is by the age of the well. The risk goes down in steps as wells grow older.

Carey breaks the risk down into three stages: young, medium, and old.

Old wells—6 years or more—have the benefit of a long period of steam injection, which expanded the steam chamber and heated the area around it. The heat wasted on nonproductive rock is useful when the injections stop. “It can act as a partial heat supply for the steam chamber if injection is shut in.”

The highest-risk wells are the youngest at around 2 years old. A shut-in in these wells where the steam chamber is still building could cause damage because the smaller steam chamber will cool faster than an older well’s.

In between are where the more difficult decisions must be made. Young wells mature at different rates. Some steam chambers mature in less than a year—making an early production cut less risky—while others take 3 years or more, increasing the risk associated with an early shut-in.

Another way to lower risk is to shut in the least valuable wells. These may well be older wells that have passed their peak production years.

There are exceptions to all of these rules of thumb. Shutting off steam injections in an older well can reduce the output of nearby younger wells in communication with those shut-in wells. A problem is that steam chambers grow laterally, often creating connections among wells and allowing steam injected into younger productive wells to migrate into an older shut-in well.

“Current practice in the industry has now evolved such that 100% NCG injection is used in the oldest wells to keep the chambers pressurized to reduce potential for loss from adjacent, newer steaming pads,” Carey said.

During a slowdown, close attention to temperature and pressure data can be revealing.

The changes can be subtle, such as an increase in the salinity in the produced water which suggests the well is pulling in bottom water.

An injection slowdown can reveal unexpected details about the reservoir. Asset teams need to beware of small issues that may be a sign of a flood of trouble ahead.

For those who look at a slowdown as a diagnostic test showing how the well reacts to changes in the temperature and pressure, it may reveal things about the formation they can use to improve future performance.

More on JPT Online
When oil demand vaporized, oil sands producers cut 300,000 B/D of production from SAGD wells. It is a test of something they have long been reluctant to do—turn down in-situ production when prices plunge.
Read more at http://go.spe.org/Oil_Sands_OnOff_Switch.

The good news is 95% of the oil companies in Texas are expected to survive 2020, which means there is a lot of bad news to endure.

Although oil prices were down on 8 June, the market is expected to see higher prices in response to the OPEC+ decision to continue production cuts.