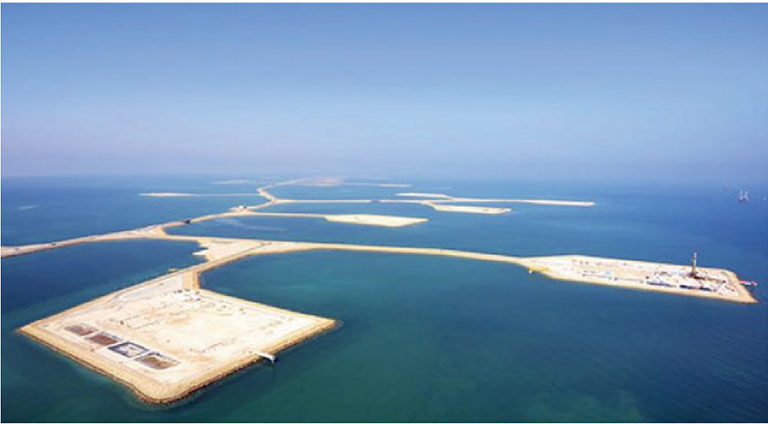 Last December I had the pleasure of returning to the Kingdom of Saudi Arabia and touring the giant Manifa oil field. Manifa produces a heavy, sour crude oil from six, long (up to 40 km), stacked reservoirs in shallow water (Arukhe 2014). The shallow waters have abundant sea grasses and corals and are teeming with marine life. Shrimping and fishing are important parts of the local economy. The development of the Manifa field is a fascinating story showing how creative solutions can minimize impact on the environment.

Manifa was discovered by Saudi Aramco in 1957. The discovery well targeted both the shallower formations productive in the large Safaniya coastal field and the deeper Arab formations so productive onshore. Neither zone was productive; however, the discovery found excellent productive layers in between, including three that were only produced in small volumes onshore and three that had never before proved productive. The heavy, sour crude was similar to Khursaniyah, one of the three major types of crude present in large quantities in the Kingdom. Demand was less for this crude than for Safaniya and Arab crudes but the market for heavy sour crudes was improving (­Aramco World1963). The first development was in 1962, and the field was brought on stream in 1964. The field produced for 20 years before being mothballed in 1985 because of low demand (Aldossary 2015).

Manifa’s history can be contrasted with that of Prudhoe Bay in Alaska. While specific reserve estimates for Manifa are not public information, both fields are very large. The Prudhoe Bay field was discovered in 1968 and did not begin production until 1977. Prudhoe production peaked at about 1.5 million BOPD in 1989. Prudhoe Bay crude averages 27.6 °API and had a significant domestic market to serve. Manifa crude is 26–31 °API and has from 2.8% to 3.7% sulfur content (Croft and Patzek 2009), with less of a market at the time. It is fairly astonishing that roughly comparable fields would go down such radically different paths.

Manifa would remain mothballed until 2006. Saudi Aramco redeveloped the field consistent with a very long life production time horizon for its large reservoirs (Saudi Aramco 2016). But the old way of approaching shallow offshore fields would not be acceptable.

The use of jackup rigs in these shallow waters would have required excessive dredging, and the size of the reservoir eliminated the possibility of effective development from the shore. A new approach to development would be needed. A creative plan to develop man-made islands connected by a causeway would allow conventional onshore rigs to be used to develop this offshore field.

A long causeway was considered, but early designs would have decreased water circulation vital to distributing nutrients and oxygen vital to marine life. With more than 4 million man-hours of work in the design phase, a solution was developed to build 27 man-made islands connected by 41 km of causeways. To ensure needed water circulation, the causeway does not go all the way across the bay and 14 bridges were built into the causeway to further improve circulation (Aldossary 2015). Production commenced in 2012 ahead of schedule and under budget in a development that earned a UNESCO Environmental Responsibility Award nomination.

It is an impressive development of which Saudi ­Aramco is rightly proud, with eventual production capacity of 900,000 BOPD or more. As our helicopter approached the massive processing facility, I looked at the three large flare stacks. There was nothing being flared. Was the field shut in? No, the design and normal operations of the field use all of the produced gas and creative operations practices mean that almost no gas is flared. Excess electricity produced by the facilities goes into the power grid.

Walking to the edge of the offshore islands I looked into the crystal blue-green waters. They were much clearer than the waters at the Pacific island resort I had come from a few days earlier. I was struck at how small the impact of a 900,000‑BOPD facility could be.

This production volume is comparable to the individual Eagle Ford, Bakken, and Permian Basin unconventionals. Not a fair comparison to be sure, but the contrast was striking. As I have flown over the Fort Worth/Dallas area, the vastness of the surface impact of more than 16,000 wells is notable. Major unconventional plays cover huge areas and most wells to date have not been drilled from multiple-well pads.

Individual well productivities and reserves for unconventionals are far lower than the Middle East, or even Alaska, requiring orders of magnitude more wells to develop comparable reserves or production. In 2014, the combined production of the Bakken/Three Forks (North Dakota) and Eagle Ford (south Texas) plays was more than 2.4 million BOPD, with proved reserves of just under 11 billion bbl of oil (EIA 2015). These reserve estimates are likely to grow, perhaps one day equaling or exceeding Prudhoe or Manifa. Subsequent drilling will need to minimize impact through techniques such as these:

Close cooperation with regulators is one step forward. As regulators use both “carrot” and “stick” approaches to reducing impact and maximizing economic and technical recoveries, operators should be able to see clear priorities for subsequent developments. With current prices, activity levels and capital investments have dropped dramatically. This decrease in activity provides us a chance to carefully analyze our own performance and identify ways of improving performance when prices recover to acceptable levels.

A significant number of unconventional wells drilled have not proved commercially viable. How can we either find ways to improve their performance—through better geosteering, alternative completion approaches, or otherwise—or eliminate their drilling? The well that is not drilled has the least environmental and economic impact of all! Some production logs have indicated that a significant number of hydraulic fracture stages contribute very little to wellbore inflow. These logs may be misleading, or perhaps those apparently non­producing stages helped to increase the production at subsequent stages. But guessing is not good enough. Existing integrated natural fracture, hydraulic fracture, geomechanical, geological, and reservoir flow models continue to have incomplete physics. Now is the time to solve these problems and find ways to produce the massive unconventional fields in North America more safely and economically, with minimal environmental impact, and to make unconventional fields around the world more viable.