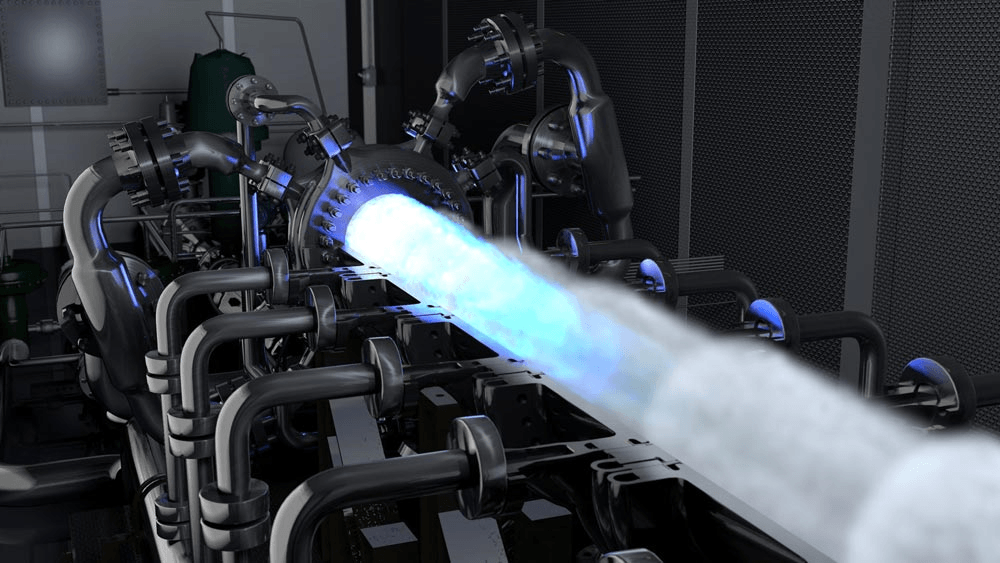 Based on rocket-engine technology used during the US space shuttle program for 30 years, the oxy-fuel combustion system burns gas or liquid hydrocarbons with oxygen to generate steam and capturable carbon dioxide. Source: Clean Energy Systems

To offset the carbon footprint of its operations in places such as offshore Malaysia and the North Sea, Denmark-based Maersk Drilling is turning to California. The offshore drilling contractor announced this week that it will invest $1 million in a company called Clean Energy Systems that is developing a new combustion technology for the industrial sector.

It uses biomass fuel to produce syngas from which hydrogen and methane can be separated for sales. Based in the Sacramento area, Clean Energy Systems says the hydrogen-depleted syngas can be burned to make electricity, the associated CO2 emissions of which is then fully captured and can be used for enhanced oil recovery or stored in the ground.

Because the system uses biomass fuel, e.g., forestry or agricultural waste, that consumed CO2 over its organic lifetime and enables CO2 storage, the process is considered by the companies to be a net-negative emission solution. But since the technology is not designed to operate on a drilling rig, Maersk Drilling will instead seek to leverage it by generating carbon credits that will offset its emissions elsewhere.

“By investing in Clean Energy Systems’ concept, we are helping to bring alive a new technology which can remove CO2 from the atmosphere. We believe the world needs a broad portfolio of technologies and solutions to meet the challenge posed by climate change, and by engaging in this project, we support the development of carbon capture and storage in a way that could allow us to progress towards carbon-neutral drilling,” said Morten Kelstrup, the chief operating officer of Maersk Drilling.

The emerging technology is based around the rocket engines used on the space shuttle along with other combustion technologies that produce high-energy gases. The full suite includes high-pressure, high-temperature steam-gas generators, turboexpanders, reheaters, and heat exchangers that were built using rocket-engine combustion principles.

Clean Energy Systems said its first commercial project will begin by late 2020 and will capture and store 300,000 tons of CO2 annually.

In addition to this recent investment, Maersk Drilling has joined a consortium in Denmark to advance CO2 sequestration. It also is developing the first offshore rig to operate using onshore power sources and is upgrading two jackup rigs to become hybrid units that will operate with lower emissions.

Zap Energy will use Chevron’s investment to develop its technology, a next-generation modular nuclear reactor with an aim toward cost-effective, flexible, and commercially scalable fusion.

An intelligent drilling optimization application performs as an adaptive autodriller. In the Marcellus Shale, ROP improved 61% and 39% and drilling performance, measured as hours on bottom, improved 25%.

A well was drilled into a prospective unconventional mudstone play offshore Norway. Two of five coring runs were successful while the rest yielded little to no core recovery. Subsequent investigation of the core substantiated that the coring issues largely had natural causes.