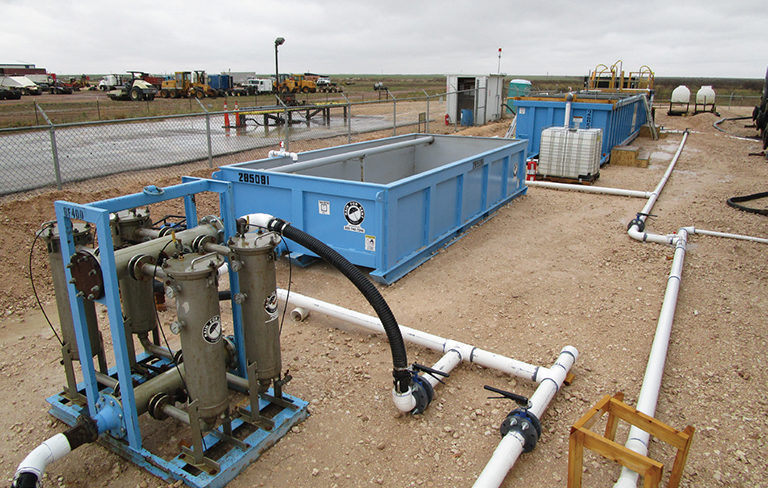 Photo courtesy of Nano Gas Technologies.
A nanobubble-based wastewater treatment system operating for Permian Disposal Services in Texas. The system’s developer says it is treating about 11,000 B/D day of produced water and enabling the operator to recover nearly all of the 2–3% of oil (by volume) that is mixed in with the water.

Reminiscent of the song made famous by late Hawaiian crooner Don Ho, tiny bubbles are the focal point of a new innovation aimed at transforming produced water from a costly byproduct into a valuable asset.

Termed nanobubbles, they are several times smaller than a human red blood cell, which allows them to play with the physics of how dissolved gas interacts with liquids, according to Nano Gas Technologies. The suburban Chicago-based startup says its technology is capable of cheaply producing these nanobubbles to treat produced wastewater that is among the “worst of the worst.”

The technology works by pushing gas, either oxygen or nitrogen, through a nozzle head that shoots the tiny bubbles into a treatment tank. The result is what the company’s chief executive officer, Len Bland, calls “fluffy water” that causes suspended solids to fall and oil to float to the top where it is easily skimmed off.

“If you want to put it in technical terms,” he said, “we change the specific gravity of the liquid so that it enables the oil that is stuck in the water to rise.”

Bland went on to explain that because the bubbles are so small, significantly higher levels of dissolved gas in water can be achieved than under normal temperatures and pressures. For instance, tap water tends to have a dissolved oxygen concentration of about 5 ppm. Nano Gas says its technology generates concentrations more than 10 times that figure.

Founded in 2013, the company is hoping the industry will take notice of its first unit that it began operating last year for a disposal well company in the Permian Basin town of Seminole, Texas.

“This stuff is just sludge,” Bland said of the produced water quality being processed at the site that is mostly coming from the bottom of settling tanks and the washout from trucks used to haul the water to and fro.

Before it is run through the nanobubble system, the water has already been through multiple conventional separation processes but “at the end of the day, they still have this dirty water that they are putting into their disposal well, potentially clogging up that well,” Bland said.

He noted that despite such problems, injecting produced water deep underground is still the most affordable option for nearly every operator around the world. But the company believes its system makes water handling cheaper, and possibly profitable, by enabling companies to recover the oil that typically represents 0.5% to 3% of injected fluids.

The company designed its business model to introduce as little risk to the ­client as possible. Instead of charging a per barrel fee, renting, or selling the equipment as many other treatment services do, the company retains ownership of its system and makes money by splitting the sales of the recovered oil with the disposal well operator.

After processing, any revenue derived from the sale of the treated water is also shared. Bland said the end product is of a good enough quality that it can be sold back to an oil company that may be looking to reduce the amount of fresh water used in hydraulic fracturing.

Because many oil producers operate a sizeable portion of their own disposal wells, Nano Gas believes the payoff would be substantially greater for them since they could recover more of their own oil and not have to pay a third party for the recycled water.

The company reports that it has successfully clarified tank bottom water without any upfront treatment processes. Such demonstrations are hoped to show that the technology can work under nearly any circumstances and that capital costs can be further reduced by eliminating the need for equipment such as heater-treaters, centrifuges, and settling tanks.

The company also says that when oxygen-nanobubbles are injected into produced water, a chemical reaction takes place that knocks out hydrogen sulfide (H2S), a toxic chemical that is so corrosive it easily eats through thick steel. The oxygen also acts as a biocide, killing harmful bacteria that could cause further downhole damage.

But because oxygen is itself corrosive, nanobubbles containing nitrogen gas are introduced into the treated produced water to displace the oxygen-containing nanobubbles. The final product is a nonreactive water that could help extend the lifespan of disposal wells prone to skin and plugging issues caused by the extremely poor quality of the injected fluids.

The nitrogen-infused water could also be beneficial to waterflooding operations since the gas is known for reducing the interfacial tension of residual oil trapped in mature reservoirs. Building on this advantage, the company claims its nanobubbles are long-­lasting. This characteristic not only keeps oil and water separated for weeks, but in a waterflood scenario, the nitrified bubbles should also remain intact and exposed to the formation long after the initial treatment.

The microscopic size of the nanobubbles gives them stability and an average half-life of 15 days—meaning that after that period, half of the bubbles remain intact and in solution. Large bubbles, such as those generated by other water treatment and separation technologies, tend to burst in seconds which Bland said wastes up to 90% of the energy and gas used to create them. Nano Gas believes that its bubbles are two orders of magnitude smaller than what anyone else in the oil and gas industry uses.

The company’s research found at least 50 other industries that might benefit from nanobubbles, including waste­water treatment and poultry farming—the oxygenated water may help chickens grow faster.