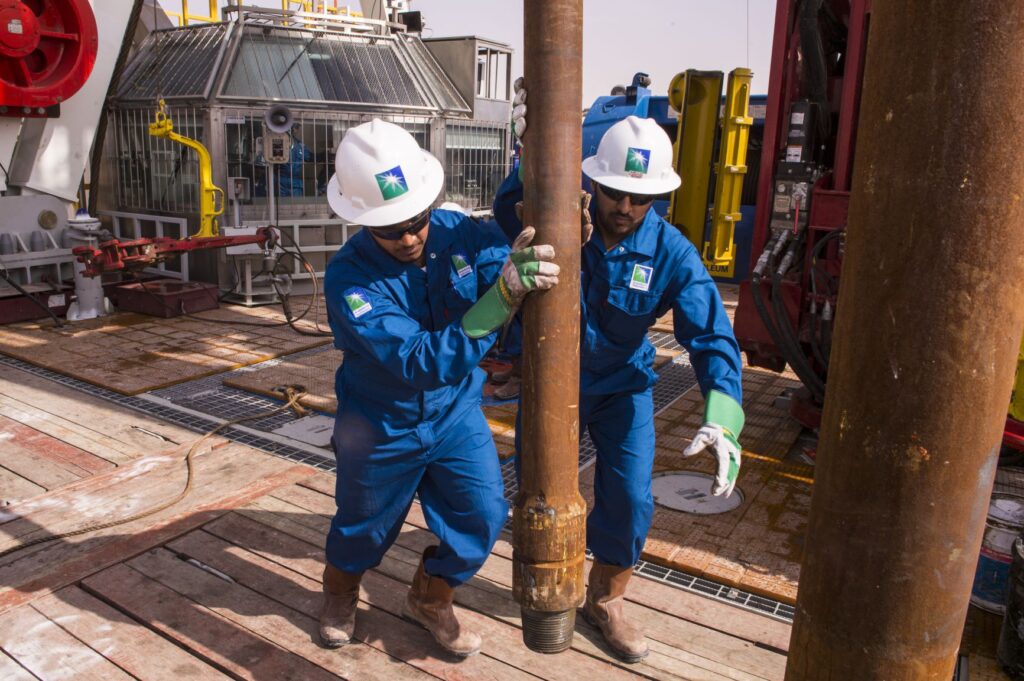 Working on the drilling floor on an onshore rig in Saudi Arabia. Source: Saudi Aramco

Saudi Aramco saw a 73% drop in profits during the second quarter of the year due to falling demand for its crude exports, according to its latest earnings report. It also estimates capital spending for the year will fall closer to the low end of the $25 to $30 billion range compared to previous forecasts of $40 to $45 billion.

Despite the cuts to is spending program, Aramco announced this week that it is underway with plans to increase its maximum sustained capacity by 1 million B/D to a new ceiling of 13 million B/D. The national oil company reported an average output of 12.7 million BOED during the quarter and a single-day output record of 12.1 million B/D of crude oil on 2 April.

Total income for the quarter amounted to $6.6 billion; $23.2 billion for the first 6 months of the year. Aramco, which is the world’s largest oil company and became publicly traded on the Saudi market exchange late last year, highlighted in its earnings release that there are no plans to cut its dividend.

“Strong headwinds from reduced demand and lower oil prices are reflected in our second-quarter results. Yet we delivered solid earnings because of our low production costs, unique scale, agile workforce, and unrivalled financial and operational strength. This helped us deliver on our plan to maintain a second-quarter dividend of $18.75 billion to be paid in the third quarter,” said Amin Nasser, Aramco’s chief executive officer, in a press statement.

Nasser added that the company is “seeing a partial recovery in the energy markets” as countries around the world gain more control over the COVID-19 pandemic, leading to increased economic activity.

Though Aramco’s profits shrank significantly, the company is weathering the storm better than the majors which recorded major losses during the second quarter. Shell reported a $18.4-billion loss during the period. Fellow European majors Total and BP suffered less, taking losses of $8.4 billion and $6.7 billion, respectively. ExxonMobil reported a quarterly loss of $1.3 billion earlier this month.

Aramco also said that in June it completed the 70% acquisition of petrochemicals company SABIC for $69.1 billion. The move to buy the Riyadh-based chemical maker is aimed at diversifying Aramco’s portfolio. The company is also pursuing a $15-billion deal to secure a major stake in India’s Reliance Industries downstream unit. Saudi Arabia is the largest supplier of crude oil to India.