Houston-area based Southwestern Energy announced that it is acquiring Montage Resources in an all-stock deal that will make the buyer the third-largest producer of the gas-rich Appalachian Basin. The Dallas-area based Montage holds about 325,500 acres in the Marcellus Shale and Utica Shales that span Ohio, West Virginia, and Pennsylvania.

The arrangement will see each of Montage’s shares exchanged for about 1.8 of Southwestern’s shares, which based on the closing price of 11 August places the value of Montage at around $204 million.

Notably, there is no stock premium attached to the deal as was once the norm. After energy investors grew worried about high debts and low returns, equity deals without an above-market premium became more common since they carry less leverage over to the buyer.

The operator expects to also be on track to generate $100 million in free cash flow by next year based on current gas prices, an effort to be aided by an expected $30 million in reductions of general and administrative costs, according to a company statement. 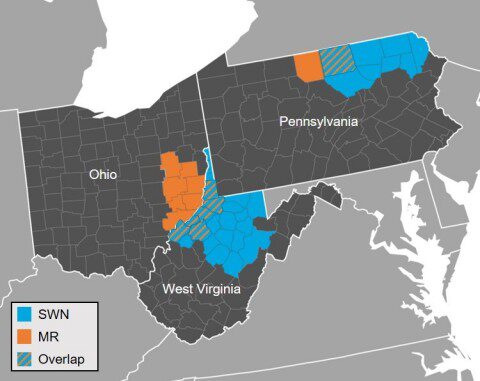 A map showing Southwestern Energy’s (SWN) and Montage Resources’ (MR) acreage position across the Appalachian Basin. The merger will increase Southwestern’s holdings to more than 650,000 acres in three US states. Source: Company reports.

“This is an exciting step for Southwestern as we expand our Appalachia footprint with the high-quality assets of Montage. As we have consistently stated, we are firm believers in the benefits of value-creating consolidation,” said Bill Way, the chief executive officer of Southwestern, in the statement.

In 2018, Southwestern turned its full attention to the Appalachian region after selling off its legacy assets in Arkansas’ Fayetteville Shale—a gas-rich formation the company discovered—in a cash deal valued at $1.87 billion to privately owned producer Flywheel Energy.

Montage was formed in 2019 through the merger of two other gas companies, Eclipse Resources and Blue Ridge Mountain Resources.

John Reinhart, the chief executive of Montage, echoed his counterpart in describing the deal as “a compelling opportunity” for both firms to consolidate. “We appreciate all of the great work by Montage employees in forming a very attractive business that will continue to build upon the success of Southwestern Energy.”

On a pro forma basis, the deal has pushed Southwestern’s outstanding debts to over $3.1 billion, an increase of 27%. To help fund the deal and pay down some of Montage’s debt, Southwestern said it has issued a new stock offering and noted it will seek to refinance the remaining debts.

Pending regulatory and shareholder approval, the deal is expected to close sometime in the fourth quarter of the year.