Total and its partners have launched the third phase of development for the Mero deepwater oil project, located 112 miles off the coast of Rio de Janeiro, in the prolific pre-salt area of the Santos Basin.

The Mero 3 floating production storage and offloading vessel (FPSO) will have a liquid treatment capacity of 180,000 B/D and is expected to start operating by 2024. It follows the production startup on the field in November 2017 through an early production system and the launch of the first phase of the project (Mero 1) approximately a month later. Mero 1 is progressing as per plan with startup scheduled in 2021. Mero 2 startup is expected in 2023, both from FPSOs. 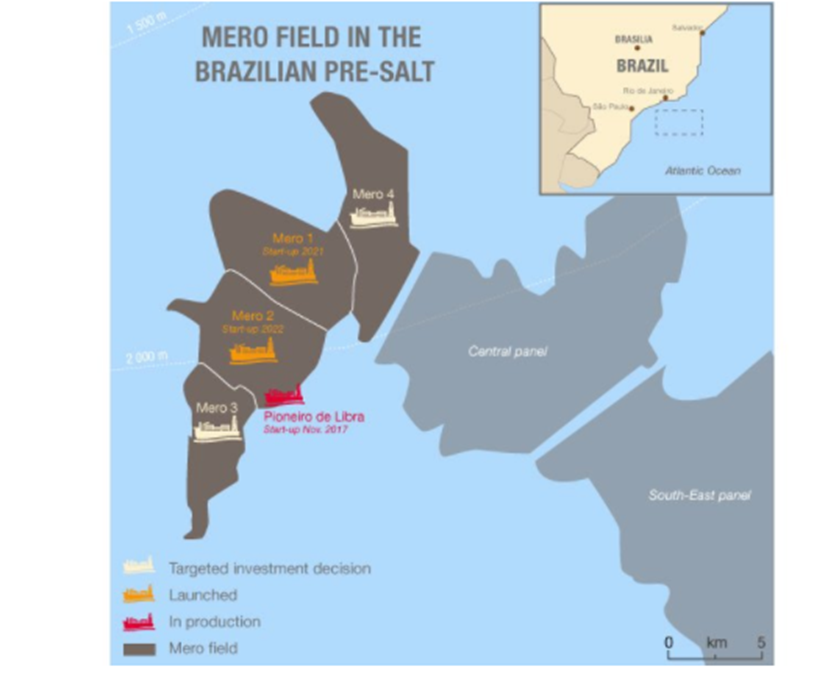 Arnaud Breuillac, president exploration & production at Total, described the decision to launch Mero 3 as a new milestone in the large-scale development of Mero field, which is estimated to contain 3 to 4 billion barrels of oil.

“It is in line with Total's growth strategy in Brazil’s deep offshore, based on giant projects enabling production at competitive cost, resilient in the face of oil-price volatility,” he said. “The Mero project will contribute to the group’s production from 2020 onwards, and we are targeting a production of 150,000 barrels per day in Brazil by 2025,” Breuillac said. Once the full potential of the field is developed, production should reach more than 600,000 B/D, he continued, adding that the Libra consortium, which is developing the project, can develop the project with technical costs below $20/bbl and low breakeven.

Another milestone for the project is the choice of Malaysian shipbuilder MISC to supply the Mero 3 FPSO. MISC is a newcomer as a contractor for large pre-salt FPSOs, according to Hayum. “The award shows that the Mero partners are committed to diversifying their contractor base and reducing development costs,” he said.

The Libra consortium is operated by Petrobras (40%) as part of an international partnership that includes Total and Shell Brasil, each with 20% ownership, and CNOOC Limited and CNPC, each with 10%. Pré-Sal Petróleo (PPSA) manages the Libra production-sharing contract.

Total’s Brazilian portfolio currently includes 22 blocks—10 of which are operated by the company—in the Campos, Santos, Barreirinhas, Ceará, Espirito Santo, Foz do Amazonas, and Pelotas basins.