These awards recognize outstanding achievement or contributions to the advancement of petroleum engineering in specific technical disciplines.

William David Norman is a principal completion engineering SME consultant for NSI Technologies with more than 40 years of global completion experience. Before working with NSI, he worked in various SME capacities for Chevron, Schlumberger, Dowell, and IMCO. He is the coauthor/editor of five books and has published more than 80 articles and technical papers. He has served as technical editor for the focus topics of fracture packing and sand control for the SPE Journal and the Journal of Petroleum Technology. Norman has chaired several SPE Forums and ATWs and the SPE Forum Series Implementation Committee and is an instructor of SPE short courses. He was named an SPE Distinguished Member and SPE Distinguished Lecturer and also received the SPE Gulf Coast Regional Award for Drilling and Completion and Southern Region Distinguished Service Award. He has served on several ATCE committees. He has served on the board of five SPE sections and was chairman of three. Norman holds a BS degree in chemistry from Mississippi College and completed MS degree work in biochemistry from the University of South Mississippi.

Paul Pastusek is a drilling mechanics adviser in the wells technical organization at ExxonMobil Upstream Integrated Solutions. He has 42 years of experience working on the redesign of drilling processes and tools to the economic limit. His areas of expertise include automation, drillstring dynamics, steerable systems, borehole quality, bit applications, cutting mechanics, rig instrumentation and control systems, and failure analysis. He holds 42 patents and has been involced in 41 papers and presentations on drilling technology.

Pastusek holds a BS degree in mechanical engineering from Texas A&M University and an MBA degree from the University of Houston. He is a registered Professional Engineer.

In his 50-plus years of service to SPE, Thomas has volunteered in various areas such as assistant editor and manuscript reviewer for SPE journals, chaired the third Archie Conference, edited three petrophysics and shaly sand reprint series, served as editor and author for the petrophysics section of the SPE Petroleum Engineering Handbook, was invited author to the SPE Reserves Conference, was keynote speaker at the SPE Formation Testing Conference in Cypress, organized two SPE Forum Series, and served on technical paper committees for many SPE annual meetings. He and coauthors published four papers in the Journal of Chemical Physics and 13 papers in journals covering formation evaluation and petrophysics. Thomas served as one of five subject-matter experts on the Presidential Commission in Washington, DC, that investigated the Macondo blowout in the US Gulf of Mexico.

John Thorogood worked with BP Exploration and heritage companies from 1973 to 2007 in operations, drilling engineering, and technology innovation roles. His last 10 years were spent as exploration drilling project manager on deepwater harsh-environment wells in Norway, Faroe Islands, and Sakhalin. Since 2007, he has acted as an independent drilling engineering adviser with Drilling Global Consultant LLP, supporting multiple international operators and scientific research organizations in deepwater and high-pressure/high-temperature operations. He advised the US Chemical Safety Board on the human factors aspects of its report on the 2010 Deepwater Horizon incident and the 2018 Pryor Trust blowout.

Thorogood is author of more than 60 articles and papers of which one-third relate to human factors, the challenges of drilling automation, and risk analysis. He served on the SPE Board as the first technical director for Drilling and Completions. He has been a member of the SPE Drilling and Completions Editorial Review Committee since 1988, was the chairperson of the 2001 Drilling Conference Technical Program and Forum Series committees and was the first chairperson of the Drilling Systems Automation Technical Section. He co-chaired the 2012 SPE Summit on the Human Factor, Process Safety, and Culture, and the 2014 SPE Workshop on Human Factors in Drilling Operations.

He holds a BA degree in engineering science and a PhD in drilling engineering from Trinity College, University of Cambridge.

Sushma Bhan is Royal Dutch Shell’s chief data officer of subsurface and wells, where she creates business co-owned data strategies and has accountability for global-data accelerators, standards, and the subsurface digital-value funnel. Bhan motivates and leads a global data community comprising more than 120 people across 21 countries, including a team of chief data officers for contracting and procurement, safety and health, projects and engineering, and exploration. During the past decade, her team’s collective data improvements have resulted in millions of dollars in costs savings and valued outcomes.

She has published technical papers on technical data management, WRFM eWellbooks, data security, release of technical information, and knowledge management. She is a member of SPE’s Management and Information Advisory Committee and chairperson for SPE’s Digital Energy Technical Section Membership Subcommittee. She is active in mentoring young professionals and guiding SPE’s India Student Chapter members. She was the recipient of the 2019 SPE Gulf Coast Management and Information Award.

Hong-quan Zhang joined The University of Tulsa in 1998, where he is the Williams Endowed Chair Professor of Petroleum Engineering and director of The Tulsa University Artificial Lift Project. Zhang served as associate editor for the SPE Journal of Petroleum Technology and received the Outstanding Associate Editor Award. As an Alexander von Humboldt Research fellow, he conducted research at the Max Planck Institute of Fluid Mechanics and the German Aerospace Research Establishment in Göttingen, Germany. He has published more than 60 referenced papers and has given more than 100 presentations at technical meetings and forums. He is the author of the book Revive Eden: Green Sahara Now.

Chin is currently a member of the Offshore Technology Conference (OTC) Board of Directors and was chairperson of the 2014 OTC Program Committee. She has published more than 50 technical papers in international journals and conferences as well as a technical book on heat exchangers. She is the recipient of the SPE Regional Projects, Facilities, and Construction Award, the SPE Outstanding Technical Editor Award, and the OTC/ASME Arthur Lubinski Best Paper Award.

Oliver Mullins is a Schlumberger fellow and member of the US National Academy of Engineering. He is leading a newly codified discipline, “reservoir fluid geodynamics,” utilizing downhole fluid analysis (DFA) and asphaltene thermodynamics for novel reservoir evaluation. Mullins led the inception and development of DFA in well logging. He has won several awards, including the SPE Regional Formation Evaluation Award, Gulf Coast Region. He has been a Distinguished Lecturer twice for SPE. His latest book, Reservoir Fluid Geodynamics and Reservoir Evaluation, represents the culmination of his life’s work. He authored the award-winning book The Physics of Reservoir Fluids: Discovery through Downhole Fluid Analysis, coedited three books, and coauthored 14 chapters on asphaltenes and related topics. He has coauthored 280 publications, half on petroleum science and half on oilfield applications, and has co-invented 131 allowed US patents.

Mullins holds a BS degree in biology from Beloit College and MS and PhD degrees in chemistry from Carnegie-Mellon University. He held postdoctoral positions in chemistry at The University of Chicago and in physics at the University of Virginia before joining Schlumberger in 1986. He is also adjunct professor of petroleum engineering at Texas A&M University.

Sustainability and Stewardship in the Oil and Gas Industry Award

Kamel Ben-Naceur is the chief executive officer for Nomadia Energy Consulting, based in Abu Dhabi. He was previously the chief economist for ADNOC and director for sustainability, technology, and outlooks at the International Energy Agency, where his teams led the agency’s Energy Technology Perspectives and World Energy Outlook. He also developed roadmaps for sustainable energy systems ahead of the Paris Conference of Parties and the UN Sustainable Development Goals. In 2014, he was appointed Tunisia’s Minister for Industry, Energy, and Mines where he aided the reform of energy subsidies. He held key positions at Schlumberger, including chief economist and technology president. He has more than 39 years of experience in the energy and industry sectors and is the coauthor of 19 books and more than 130 publications.

Ben-Naceur became an SPE member in 1985 and has chaired several committees including CO2 Capture and Storage, the Forum Series, and Business Management and Leadership. He serves as the Management and Information technical director on the SPE Board of Directors. Ben-Naceur was an SPE Distinguished Lecturer and co-led the development of the Engineering Solutions for Sustainability, Materials, and Resources workshop series.

He holds an MS degree from Ecole Polytechnique and an aggregation of mathematics from the Ecole Normale Superieure.

The SPE Distinguished Membership recognizes SPE members who achieve distinction deemed worthy of special recognition. This award acknowledges members who have attained eminence in the petroleum industry or the academic community, or who have made significant contributions to SPE. 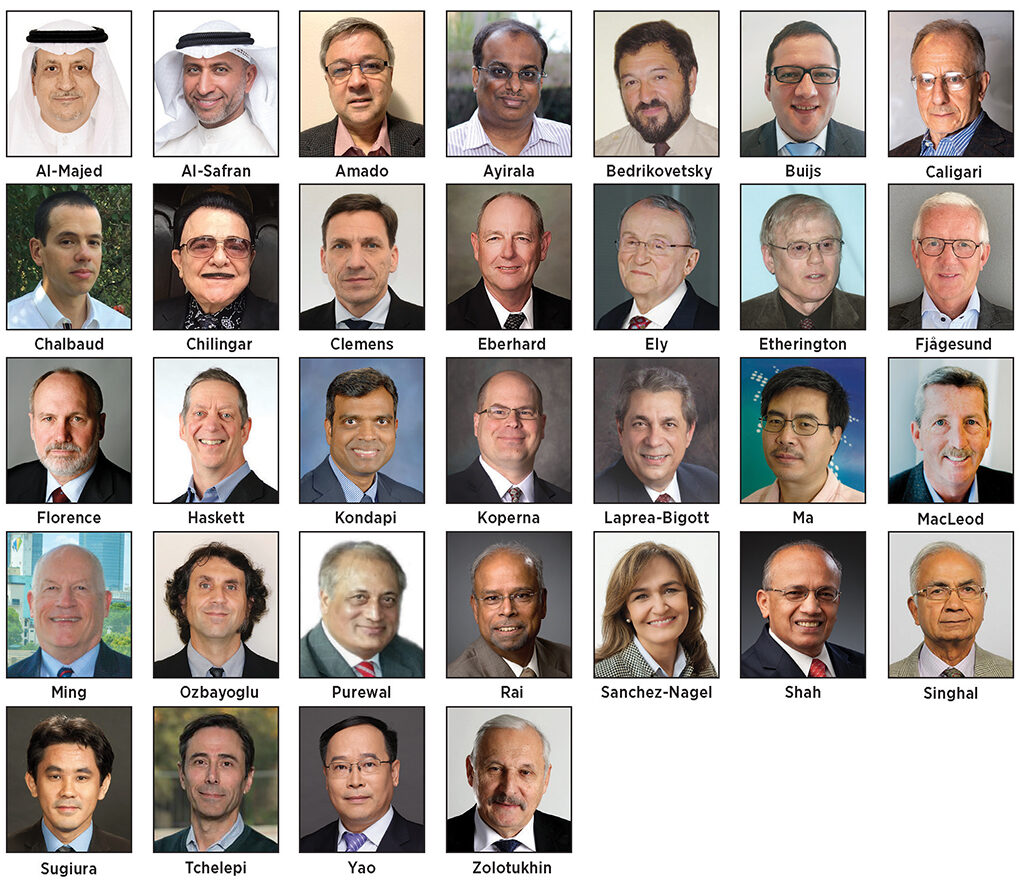