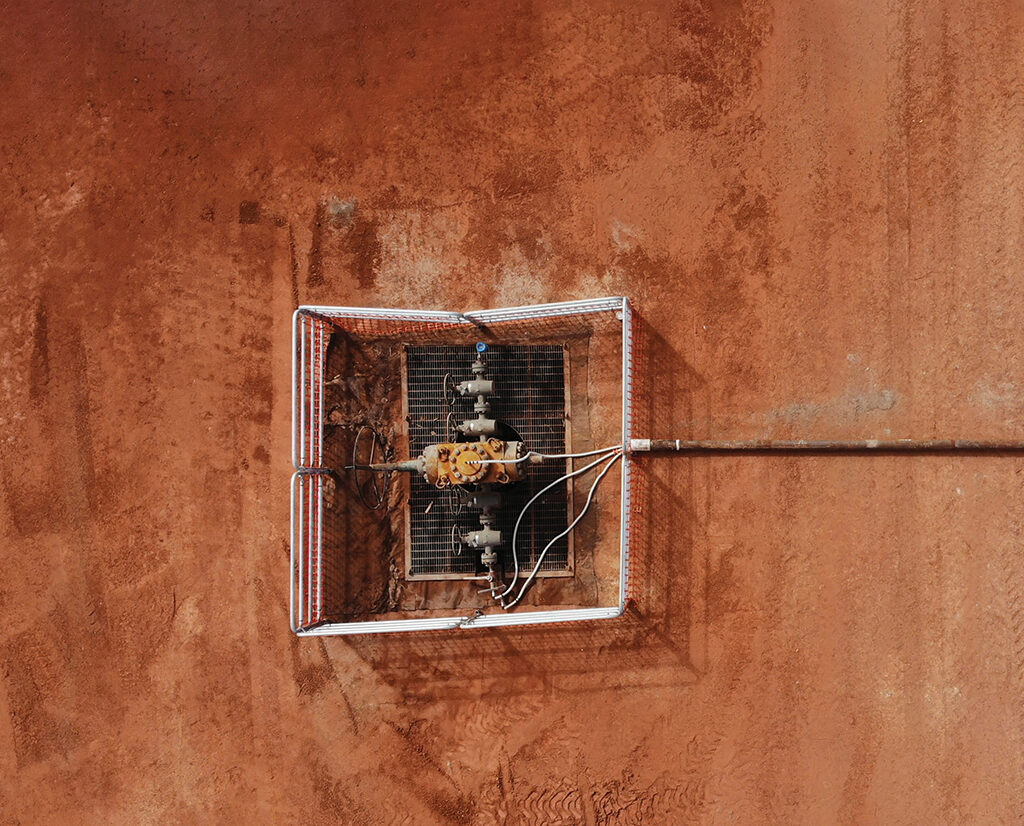 Source: Origin Energy.
A lone wellhead is wired up for monitoring as part of an exploration project in the Beetaloo Basin—a tight-gas play in Australia’s Northern Territory. The site is one of the places where a new diagnostic was used—one that may enable operators to execute so-called “engineered completions” at scale.

One of the grand challenges facing the oil and gas industry’s global quest to improve the potential of tight reservoirs involves designing horizontal-well completions that match the often-complex heterogeneity of the target formations.

This sums up the general concept most call the “engineered completion.”

In theory, tailoring a stimulation job to the varying rock properties found along the lateral section of a horizontal wellbore should result in better production for less capital. In practice, the industry has never attempted to do this on a meaningful scale.

Among other reasons, the detailed subsurface data required to shake the bonds of geometric, or “cookie cutter,” designs have long been considered too costly to gather or too time-consuming to analyze.

A shift is underway though.

This is thanks in part to a number of innovations that have hit the market in recent years to meet rising demand for real-time completions-monitoring services. By interpreting pressure signals and other reservoir responses, the new tools aim to give operators the competency they need to adjust fracture designs as the stimulation progresses.

But there is another route to the engineered completion.

It begins before the well is hydraulically fractured. This effort to predetermine different fracture-stage designs has established its own distinct arena of innovation.

Behnam Zanganeh, a former research student at the University of Calgary, was part of a team that developed one of the latest approaches. It is notable in part because it requires no new technology—just new ways of thinking about some old ideas.

In a paper published in July during the virtual Unconventional Resources Technology Conference, Zanganeh and his fellow petrotechnical researchers showed how multiple points in a wellbore can be tested for different reservoir-quality parameters quickly and simply relative to traditional methods (URTeC 2838). This is done by combining and fundamentally altering a test known for being slow: the diagnostic fracture injection test (DFIT). The biggest change it calls for is to start flowback after the injection cycle for flowback analysis (FBA), thus eliminating the lengthy falloff cycle associated with the DFIT.

The paper outlines a validation study done with Sydney-based Origin Energy which used the blended DFIT-FBA method in a vertical open hole to test two previously untested horizons in the Beetaloo Basin, a frontier unconventional gas play in the center of Australia’s Northern Territory. The results were integrated into the models Origin ultimately used to select its landing target for its subsequent horizontal program.

Like a traditional DFIT, the new approach involves pumping a small amount of water into a perforation to make a small hydraulic fracture. “We then analyze the flowback rate and pressure using rate transient analysis to estimate closure pressure, pore pressure [i.e., reservoir pressure], and give a productivity index,” corresponding to the created mini-fracture, explained Zanganeh who graduated last year and is now a reservoir engineer with Chevron in Canada.

“The main advantage of this method is that everything usually takes less than 2 hours,” he added. “If we wanted to do a conventional DFIT or well testing in each of these layers, it would have taken at least a few weeks or even months to complete.”

Two of the chief deliverables—closure pressure and reservoir pressure—count among the most critical inputs engineers need to design the main hydraulic fracture stimulation treatment. Aside from the workflow, all operators need to execute the DFIT-FBA test are pressure gauges and a choke-management system—standard equipment of any completions job.

Though the highlighted experiment was in a vertical well, the researchers see the results as only one of several milestones for a methodology they say is broadly applicable and field proven. As for cost, a DFIT is one of the cheaper options available to operators, costing a few thousand dollars per test vs. running fiber-optic systems and microseismic surveys that range between six and seven figures.

Since being created by Zanganeh and his colleagues about 2 years ago, the DFIT-FBA has been used in almost 20 other field studies (representing a mix of horizontal and vertical wells) with several operators that are partnered with the University of Calgary through its Tight Oil Consortium. In addition to Origin, other sponsors of the research group and operators directly involved in the project include Birchcliff Energy, ConocoPhillips, ExxonMobil, and Chevron.

Chris Clarkson, a professor at the University of Calgary and director of the Tight Oil Consortium, is one of the method’s co-developers. He said operators have long desired to access multiple locations of the wellbore, or what he calls “reservoir compartments,” to understand how rock and reservoir conditions change across the wellbore and adjust stage designs accordingly.

“But until now, we’ve never been able to do that because the tests take too long and would be too disruptive to the operations,” he said. “Now that we know we can do it, we’ve just begun to think about what the implications of it will be.”

For starters, the test results could encourage an operator to adjust the number of stages or the design for each stage. They may also suggest using lower pumping rates and proppant volumes to avoid excessive fracture growth and also reduce the cost of a stage. If reservoir quality is deemed excessively low in a particular zone or the risk of inter-well communication is calculated as too high, an operator may skip making an investment in it altogether.

Some of the ideas swirling around for future study include using the estimate of productivity potential, or what the researchers call the productivity index, for A/B testing of stimulation fluids (e.g., surfactants, friction reducers, nanoparticles, etc.) within the same wellbore. Additionally, the DFIT-FBA could be used to decide how to sequence the completion of wells that are destined for ­zipper fracturing, Clarkson noted.

Making the DFIT a Fit for Tight Rocks

Poor reservoir estimates can be costly in the world of tight-rock completions. But as alluded to, accuracy costs so much in the way of time that the DFIT is used sparingly by some unconventional explorers and not at all by others. On the other hand, there are reasons not to be overly reliant on the DFIT, especially since almost all the tests involve measuring conditions at the toe end of wells that often stretch for 1 or 2 miles.

Nevertheless, the traditional DFIT remains an influential tool for those tasked with designing fracturing recipes because it is one of the only ways to obtain the in-situ pressures and stresses of virgin rock.

In a typical horizontal well a DFIT involves pumping around 15 to 25 bbl of total fluid into a stage to create a small ­fracture, hence it is also known as a “mini-frac” test. After pumping stops, the formation squeezes back against the small volume of fluid and the dynamics of closure are monitored with a pressure gauge. Since the closure process may take weeks, a memory gauge is often used in lieu of real-time monitoring.

The rate and pressure plots are analyzed to help decide the rate and proppant loadings to apply during the primary fracturing treatment. Once that is done, flowback analysis comes into play. Completions and production engineers monitor the behavior of early time-flow for a period that often lasts about 30 days to assess the effectiveness of the fracturing design.

The DFIT-FBA takes these principals and applies them on a much smaller scale.

Like a normal DFIT, only 3 to 6 bbl/min is pumped for about 15 minutes to form the mini-fracture during the new test. Unlike a normal DFIT, the fluids are flowed back immediately for about an hour as the flowback rates and pressures are deciphered using classic rate transient analysis methods. Reservoir quality estimates are in hand immediately after.

In a reasonable real-world scenario, an operator could use the technique just described to test a horizontal well’s toe section, a few areas of the middle lateral section, and the heel. “You can do all of that in a day and then adjust your stimulation treatment design in that well and possibly subsequent wells on the pad,” said Clarkson.

Back to the Future

The idea behind the new DFIT-FBA is about to celebrate its 40th birthday. The original concept for a faster DFIT (SPE 8297) came from two of reservoir engineering’s most well-known pioneers, Kenneth Nolte and Michael Smith, during their time at Amoco.

Their approach, introduced to the industry in 1981, aimed to obtain minimum in-situ stress data to aid in hydraulic-fracture design. To do this, the Nolte-Smith version flows back 25% the rate of the injected volume.

“It was very successful for what they were trying to do,” which was estimating closure pressure, said Clarkson. “The problem is, by flowing back at such a high rate the fractures close very quickly.” And if the connection between the mini-fracture and the reservoir is lost, then the line of communication has been cut and there is no way to estimate reservoir properties.

To see if there was a way to keep the fractures open for a longer period so more reservoir data could be obtained, the researchers at the University of Calgary decided to simply lower the flowback rate.

In the end, they found the optimal flowback rate to be about 5% of the injected rate. Rates below 1% were tested and delivered quality data, but at such a low flow rate specialized wellhead equipment would be needed and the goal was to make this test as easy to implement as possible.

Along those lines, Clarkson high­lighted that while the flowback rates are different, the new analysis workflow still relies on the classic Nolte-Smith method for “picking” the point in time where fracture closure happens. “It’s really simple—there’s no art in it at all,” he said of the Nolte-Smith picking ­method. “You are looking for something very specific.”

Clarkson’s emphasis here is relevant considering the unconventional sector’s ongoing technical debate over the use of DFIT interpretation methods that have been popularized in the past decade. Disagreement between some of these new methods centers on picking the point on flow rate and pressure plots that indicate actual closure.

Without knowing closure, the analysis can misjudge the minimum in-situ stress, potentially leading to suboptimal stimulation designs, underscoring the importance of the discussion.

To avoid ambiguity and the complexity of contemporary methods, the University of Calgary researchers found refuge in the straightforward analysis proposed by Nolte-Smith. “You want to be able to design a test that can be analyzed by many different people and not just a specialist,” said Clarkson.