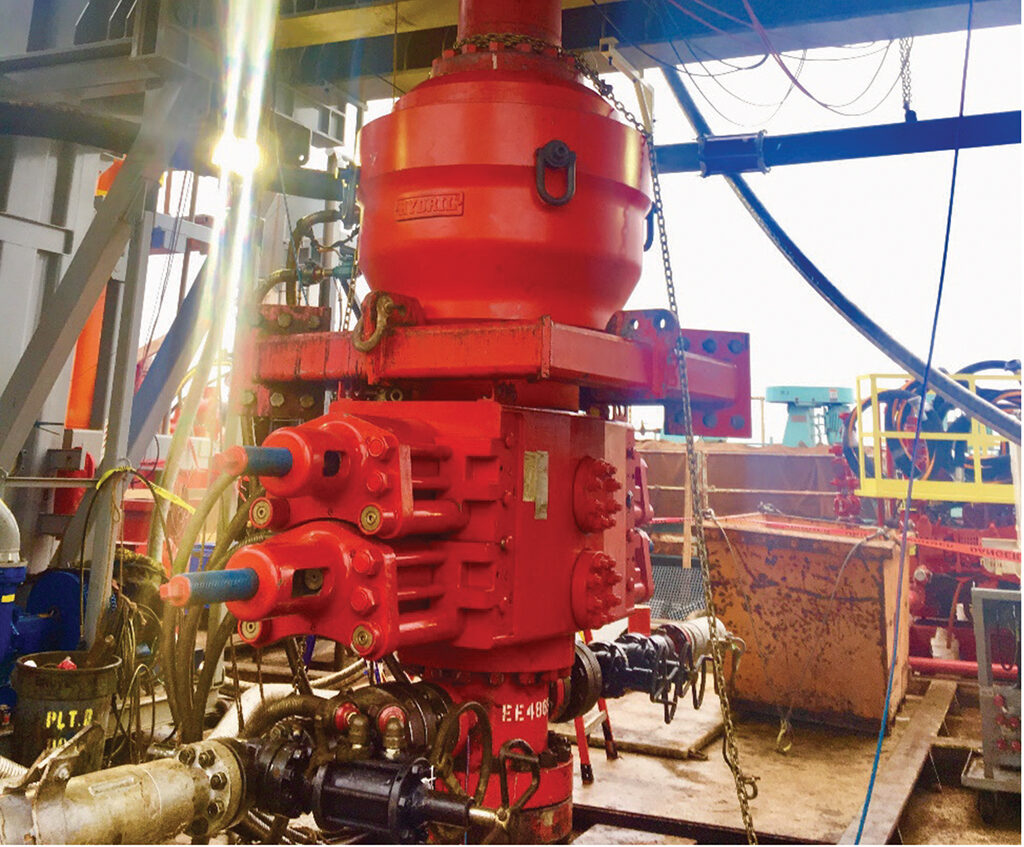 Managed-pressure drilling (MPD) as a drilling process is focused on the simple but effective principle that by managing downhole pressures, critical performance indicators such as risk, safety, efficiency, and cost are also controlled. As the energy world works to balance supply, demand, and the environment, efficient solutions such as MPD can help drive the promise of a compatible relationship. Globally, MPD is increasingly seen as an option to move drilling toward a “green” future. Beyond putting in place an adaptive drilling process to precisely control the annular-pressure profile throughout the well, MPD has consistently shown it can support green credentials for the wells where the application is utilized.

This article discusses real-world examples of the less often considered but valuable environmental benefits delivered via MPD which include the following.

These MPD benefits are well documented in the technical literature of the industry. In fact, a basic search for the exact phrase “managed pressure drilling” in OnePetro, the online library of technical literature for the oil and gas industry, shows 1,775 results. A majority of these papers was written in the past 10 years with each year averaging more than 100 technical papers and the average over the past 5 years increasing to 150 papers per year. The numbers tell the story of the growing technical interest in MPD technology which has been sustained even through the recent economic downturns. A further search of these MPD papers shows that 1,117 (63%) papers mention “safety,” 849 (48%) mention “efficiency,” and 47 (3%) specifically mention “environmental impact.”

With the recent interest in green and environmentally friendly technologies, there is a need to highlight that the safety and efficiency benefits MPD applications already provide are also reducing environmental impact. Generally speaking, choosing MPD vs. conventional drilling methods is a step toward carbon neutrality. The following case studies showcase the improvements MPD has provided in land, shallow-water, and deepwater applications as seen from the perspective of environmental-impact mitigation.

For land rigs, particularly in the US, where the majority have for decades now constantly deployed rotating control devices (RCD) that enable operations involving MPD and underbalanced drilling (UBD) methods, RCD technologies have consistently proven to reduce the risk of spillage and blowouts. Studies have shown that the use of a fit-for-­purpose RCD has been statistically ­proven to “reduce the risk of a well-control event when drilling with an essentially incompressible fluid and not inviting the well to flow in the process,” underscoring the safety and environmental benefits of MPD in terms of minimizing unintentional hydrocarbon release.

The success with MPD methods in land applications across the US has also been replicated in other locations globally, where various technologies and applications have been used to reduce the volume of mud chemicals consumed and to simplify the drilling fluids requirements. In one example in the Middle East, an operator using MPD experienced a significant reduction in drilling mud lost to the well, which saved 145 truckloads of mud shipments. Not only did this reduce the logistics and transportation requirements (and the emissions involved) but it also cut back on the environmental impact of manufacturing ­specialty drilling mud materials and their subsequent disposal.

In the following shallow-water examples, MPD allowed for drilling objectives to be achieved with fewer attempts and with greater operational efficiency. The method also reduced the rig resources required and avoided the unnecessary consumption of energy and material resources, preventing the release of more CO2 to the atmosphere.

MPD was recently used in offshore Egypt to mitigate hazards caused by a high-pressure aquifer in an exploratory well with a narrow or nonexistent window. Drilling conventionally in the formation had resulted in 60 days of NPT and loss of a hole section because of differential sticking. The incident-free MPD operation helped the operator avoid further cost overruns, but more importantly, it helped achieve the well objectives by reaching target depth, eliminating the need to drill another well to collect the information required and reducing the overall carbon footprint of the project.

In the North Sea, MPD was used in a five-well campaign on a high-pressure/high-temperature reservoir on a jackup rig to mitigate the hazards of drilling through a narrow margin and to identify the wellbore breathing experienced on offset wells. It was also used to help free the drillstring when it got stuck by enabling the management of downhole pressures while displacing the well to a lighter drilling fluid. Operations resumed in less than 6 hours and avoided undesirable scenarios that could have used up months of rig time, thereby significantly minimizing the environmental footprint of the entire operation.

With dynamically positioned vessels involving almost four times as much horsepower (and associated CO2 emissions) as jackup rigs, the largest impact on the environmental footprint and minimization of emissions associated with drilling activities is in deep water. It is here that the level of MPD technology uptake and adoption has proceeded rapidly over the past decade; now, close to one out of five (approximately 20%) of floating drilling rigs have integrated MPD into their systems enabling them to deploy MPD as required by operator clients. This practice is most prevalent in Brazil where MPD integration in deepwater rigs was pioneered and successfully and consistently deployed to enable the efficient exploration and development of deepwater pre-salt reservoirs. In one case study from the area, using MPD equipment made it possible to reach target depth safely and efficiently in a well that previously could not be drilled with conventional drilling methods due to severe fluid-circulation losses. In a previous well drilled conventionally, it was reported that 10 cement plugs—adding up to almost 4,000 bbl of slurry—were displaced into the loss zones with minimal drilling progress. MPD in this sense minimized greenhouse gas emissions through the conservation of resources (whether cement, fuel, or others) in this deepwater environment.

Recently, MPD has also helped achieve or exceed targets for time, cost, and environmental-impact mitigation when drilling, casing, and cementing deep­water wells with extremely narrow operating windows in the Gulf of Mexico. A case study mentions that in addition to using MPD for drilling, it was also used to strip pipe, run casing, cement casing, and run lower completions. Over the course of drilling in the first three wells, the study said, MPD helped to save 38 days in total compared to plan. In subsequent wells, the practice eliminated a contingency liner, enabled manipulation of surface backpressure to optimize the mud-­density program, helped deepen and sidetrack the well for better formation evaluation, and managed pressures when cementing the solid-expandable casing. This example shows that MPD solutions can be effectively leveraged not only in the drilling phase of the well but also throughout the coring, casing, cementing, and completion phases, further expanding the environmental impact mitigation that managed-pressure wells make possible.

It is also worth highlighting that by streamlining the well architecture, MPD effectively lessens the material requirements for well construction. By eliminating a contingency liner or casing string(s) in a well, not only are resources conserved, but more importantly, savings in emissions throughout the entire supply chain are realized. There is less consumption and processing of raw materials used in the production of steel. Fewer shipping and transportation tasks and less storage and handling of the product are involved, making sustainability gains of this MPD benefit impactful for the environment.

Expanded further, there have even been instances where MPD was used in reservoir development to reduce the total number of wells that were drilled in the field. In Asia, an operator targeted high-productivity areas in an onshore field instead of adopting a conventional reservoir drainage approach that required far more wells. By drilling only a few big-bore wells using a combination of MPD and casing-valve technologies, the operator achieved production targets from this fractured carbonate reservoir faster and with fewer wells. This in turn minimized the forest area that was cleared for the wells and significantly reduced the environmental footprint and impact of the entire field development.

MPD and UBD applications have historically used approaches that lessen the energy footprint of their operations, for example, by utilizing electric units instead of diesel-powered engines where possible. Systems have been developed that capture and recycle engine exhaust gas for reinjection to deliver environmental benefits.

In line with material conservation, advances in RCD sealing-element life enhancement have produced materials that are more reliable and long lasting. This should not only make MPD applications safer and more efficient but also cut back on the consumable materials utilized during MPD operations throughout the entire supply chain. Increased instrumentation and monitoring in recent versions of MPD equipment allow for predictive-maintenance programs that increase reliability and extend the life of MPD component systems when used with existing systems and processes.

Automation and digitalization initiatives and the increasing use of data science and artificial intelligence methods to enhance remote-support capabilities in MPD systems will help reduce the number of MPD specialists required on-site for managed pressure wells. By moving data instead of people, these developments will enable a drawdown on MPD service personnel on board rigs; in turn, they will reduce emissions required to host and transport personnel.

There is more that can be done to increase the environmental focus and benefits of MPD applications. Further optimization of MPD equipment systems will involve sustainable sourcing of materials and fewer material requirements. Future systems must take into consideration how all, if not the majority, of the component parts can be recycled or repurposed in new technology iterations. As MPD technology is upgraded or refreshed, the goals must be to cut back on the waste produced, dispose used MPD component parts in the most environmentally friendly manner possible, and develop a standard for systematically measuring and verifying carbon offsets enabled by MPD technology.

Furthermore, though MPD ­technology has been used for renewable energy sources, particularly in conventional and enhanced geothermal system wells, it would be good to see MPD used more in these applications—such as in wells being drilled for wastewater injection and carbon capture and storage initiatives—to further increase its contributions to green initiatives.

Ultimately, while alternative technologies exist that help accomplish the objective of reducing upstream carbon intensity per barrel of oil, improving the efficiency of drilling and completing oil and gas wells is a cost-effective—and often the most immediate—way to minimize the use of fossil fuels. When deployed consistently and at wider scale, MPD can yield a larger portion of emission reductions in the well construction process and contribute to helping companies meet their net-carbon-zero goals. MPD is proving that managing pressure is not just managing risk, safety, efficiency, and cost. More importantly and timelier in this day and age, managing pressure is managing our environmental impact.