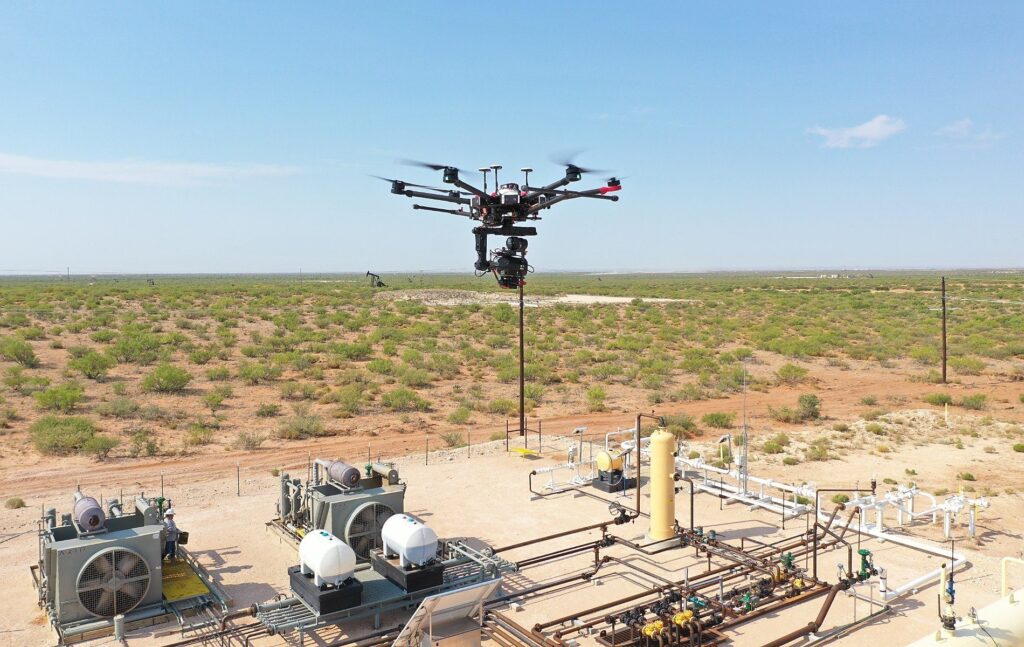 An unmanned aerial vehicle, or drone, developed by Baker Hughes’ venture company Avitas hovers above an oil and gas production site in the Permian Basin of Texas. Source: Shell

Shell said this week that in July it inked a deal with Baker Hughes’ drone venture company, Avitas, to expand drone-monitoring services at its unconventional assets in the Permian Basin. Shell is one of the fastest adopters of drone platforms which are still considered an emerging technology by much of the oil and gas industry. Last year, the company said it was using them on a daily basis both onshore and offshore.

In the Permian, the operator will leverage the drone technology’s optical gas-imaging camera and laser-based detection system to bolster its methane-leak detection and repair program. The drones will play a critical role in Shell’s goal to limit emissions at its North American operations to below 0.2% of its produced natural gas volumes by 2025.

Based in Boston, Massachusetts, Avitas was acquired by Houston-based Baker Hughes last year, making the aerial-inspection startup the service company’s first addition to its venture portfolio.

Shell has been testing Avitas’ drone technology in the Permian since 2018 at a small number of facilities. The pilot tests required approval in 2018 from the Federal Aviation Administration to fly the drones beyond visual line of sight which was previously prohibited.

With the technology proven out, the new plan will cover Shell’s entire operating area in the Permian of more than 500 locations, including 150 that are designated for federal air-quality reporting regulations. Shell holds interests in about 500,000 acres in the Permian, which include more than 1,300 operated and nonoperated wells.

The operator also said the drone platform and its complementing software will increase its ability to find leaks and that in the future it hopes to use high-altitude drones that could cover larger areas with more ease. “This, in turn, will enable much quicker repair of leaks, reducing methane emissions and the related global warming impact,” the company said in a statement on its website.

Shell noted that its leak-detection plan and onshore emission standards are stricter than what current regulations call for and that it is part of several other initiatives to spur the development of other emission-mitigation technologies. This includes participation in a project at the University of Texas called ASTRA that is working to build a proof-of-concept network of methane sensors across the Permian.