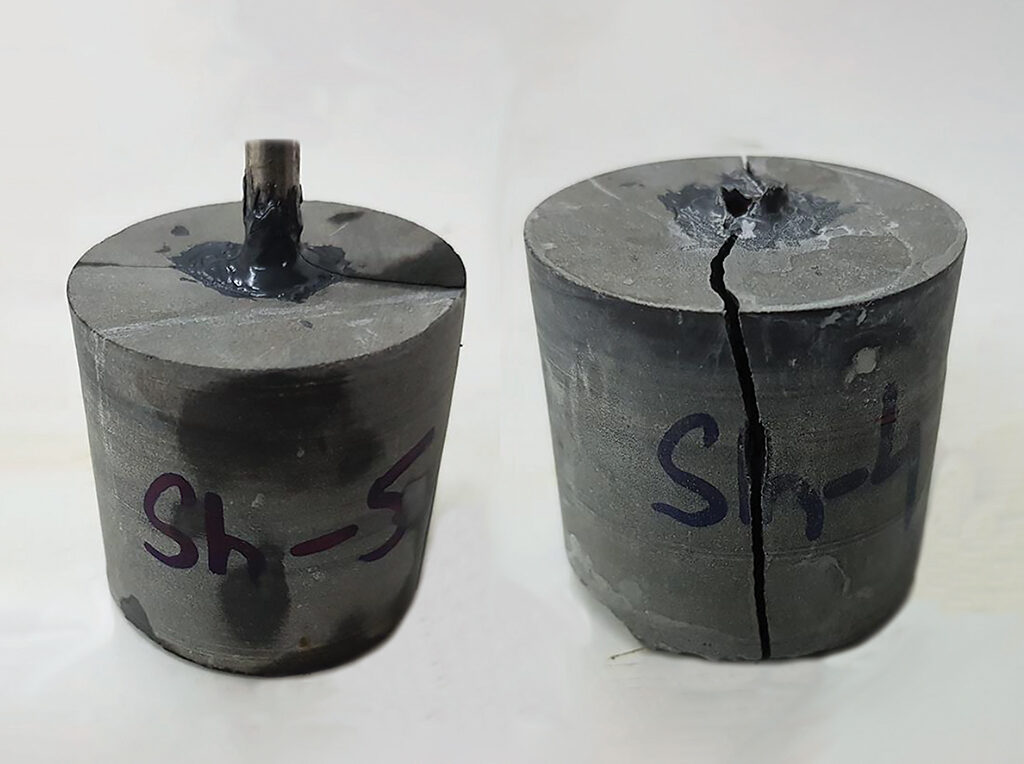 On the left, a core plug from the Eagle Ford Shale after being hydraulically fractured with slickwater. On the right, another sample from the same formation that has been split in half using a new thermochemical formula that may displace large numbers of pressure-pumping units. Source: URTeC 2439.

By turning up the temperatures downhole, you need less of everything up on the surface.

This is what is hoped to be proven soon with an experimental chemical technology that is seeing some of its first field tests in Saudi Arabia’s emerging tight-gas formations this year.

The innovation centers around reactive chemicals known as thermochemicals that researchers at Saudi Aramco and King Fahd University of Petroleum & Minerals (KFUPM) in Dhahran spent most of the past decade developing.

When it comes to unconventional applications, the world’s largest upstream company has two big ambitions. The first is to introduce a new hydraulic fracturing fluid that shaves millions of dollars off the cost of horizontal wells by more than halving the amount of equipment and water typically needed to stimulate the wells. Second, it aims to reduce the number of unproductive fracture stages and the required number of stages by improving stage productivity.

“It’s like a hybridization of pulse fracturing and hydraulic fracturing,” explained Ayman Al-Nakhli, a chemist and petroleum scientist at Saudi Aramco’s EXPEC Advanced Research Center. “The thermochemical will create a pressure pulse downhole to break down the rock—then we can propagate the fracture with hydraulic fluids.”

Al-Nakhli recently shared new details about the technology at the virtual 2020 Unconventional Resources Technology Conference (URTeC) while presenting a technical paper (URTeC 2439) that he authored with colleagues and university collaborators. The paper outlines laboratory tests in which samples of shale rock from the US and elsewhere were fractured using traditional slickwater fluids alongside the thermochemical approach—or what Al-Nakhli calls the “Exo-Frac.”

While validation awaits, the years-long research and development project is a reminder that as Saudi Aramco seeks to develop the Kingdom’s tight-gas resources it is not relying solely on the North American experience or its suite of established technologies.

The tests highlighted during the conference showed that when pumped into core and other rock samples at the initiation of small-scale hydraulic fracturing treatments, the chemical agents undergo an exothermic reaction that creates a pressure pulse strong enough to induce a fracture in the rock. Meanwhile, as the chemicals reach temperatures that may exceed 270°F, nitrogen gas is rapidly generated inside the fracture which increases its in-situ pressure.

As it is drawn up for a real-world application, pumping the thermochemicals downhole would take roughly 5 minutes. Once the reaction is activated, the pressure pulse lasts only milliseconds. The high-temperature reaction continues for no more than 10 minutes before all the heat is absorbed into the surrounding formation.

However brief this action may be, the researchers believe that the pressure pulse and subsequent expansion of gas can be engineered to leave behind a lasting impression in the form of a much weaker rock fabric.

The next thing to do is to follow up with a slickwater treatment, typical in everything except for its abbreviated duration. With more chemical energy leveraged downhole, Al-Nakhli said far less hydraulic energy is needed to be generated mechanically.

He added that one difference with this pressure-pulse technique and existing methods is that it requires no propellants or sources of ignition—the thermochemicals are aqueous. Saudi Aramco has devoted much of its research efforts to developing the additives and activators that allow it to control reaction times and pressures. The company has several formulas with a capability to produce pressure pulses that range from 3,800 psi on the low end to 20,000 psi on the extreme.

Aside from displacing pressure-pumping equipment, the researchers are optimistic about another potential deliverable which they refer to as “synthetic sweetspots.” These are essentially areas of weaker rock caused by a critical byproduct of the pressure pulse: microfractures. Al-Nakhli is hopeful that the ability to induce microfractures will enable the method to be used to fracture any competent and deep reservoir, and especially those that are the toughest to stimulate due to high breakdown pressures.

What Saudi Aramco’s chemistry experiment also needs to prove is whether those microfractures can be created in such abundance around each fracture stage that they increase near-wellbore permeability and thus overall productivity. A knock-on effect of more stage-level production is that it would give an operator greater incentive to lower its investment in each well by designing it with fewer stages.

Fracturing With a Quarter of the Pressure

From a geomechanical point of view, the primary effect of the Exo-Frac is a reduction in the reservoir’s breakdown pressure, i.e., the force required to induce fractures.

In the highlighted test cases this was demonstrated using three different types of rocks, including samples from the Eagle Ford Shale in Texas, recognized as a prolific producer of both tight oil and tight gas. The other rocks used were Scioto sandstone (a formation found in southern Ohio) and a nongeographically associated Calcareous rock (i.e., a calcium carbonate).

Using a coreflooding system to simulate a scaled-up job, plug samples from each formation were soaked for 2 weeks and then stimulated using both the thermochemical and slickwater fracturing methods.

The biggest difference by far was seen in the Eagle Ford rock which had a breakdown pressure of 2,000 psi when treated with slickwater. When given a dose of thermochemicals that figure dropped 55% to just 900 psi.

However, as the researchers point out, the energy from the pressure pulse remains an influencing factor. That means the applied hydraulic pressure to the Eagle Ford sample ended up being only 700 psi—a 75% reduction.

Translating this into operational terms, Al-Nakhli said the difference means that a slickwater stimulation requiring 20,000 psi on the surface could be replaced with the proposed thermochemical real-slickwater mix (at a 1:10 ratio) that needs only 5,000 psi of pumping power.

In the same round of tests, the required hydraulic pressure to fracture the Calcareous and Scioto samples dropped by 68% and 12%, respectively. These results corresponded with the control—a tight-cement block—which saw its required hydraulic pressure fall by 49%. The variance in these reductions implies that mineralogy strongly influences the method’s efficacy, something that the researchers said they are further investigating.

The researchers arrived at the conclusion that the microfractures created as a result of the pressure pulse allow for greater injectivity and wider induced fractures. In their paper, Al‑Nakhli and his cohorts said in contrast, “Slickwater fracturing seems to be creating high-permeable channels rather than fractures.”

This is partly based on the observation that in every thermochemical stimulation the rock samples had split in half by the end of the test—an effect never seen in any of the corresponding ­samples treated with slickwater.

The researchers tie the drastic reductions in breakdown and required hydraulic pressures to a weakening of the well’s stress cage, also known as hoop stress. This is going to be critical for Saudi Aramco and KFUPM to demonstrate in the field because the process of creating manmade fractures requires downhole hydraulic pressures to overwhelm the elastic strength of the stress cage. That, ultimately, is what defines the size of a pressure-pumping fleet and the volumes of fluid it will consume on each well.

It is possible to lower the hoop-stress threshold, the researchers claim, because the downhole reaction pushes against the rock hard enough to create a multiplex of microfractures—cracks in the proverbial dam. The tiny fissures add up to a high leakoff rate when the primary fracturing fluids are pumped downhole, which Al-Nakhli said effectively “bypasses” the hoop stresses around the wellbore.

Downsizing a fracturing fleet by three-quarters its typical horsepower would be by itself a cost revolution, but it would also go a long way to meet Saudi Aramco’s goal of scaling up its unconventional program while using the smallest volumes of its precious freshwater resources as possible. (This has also led to separate research work on fracturing with seawater.)

Because less force is needed to successfully break down the reservoir, total pumping time for an Exo-Frac would likely be less than an hour. All told, the water intensity of a thermochemically fractured well should be a small fraction of that for a slickwater treatment.