Before global oil prices turned south earlier this year in swift and historic fashion, Oklahoma City-based Chesapeake Energy was gearing up to build a new gas-compression station in the Eagle Ford Shale of Texas.

The multimillion-dollar facility was to be the workhorse of the company’s first attempt at cyclic-gas injection, an enhanced oil recovery (EOR) method more commonly called huff ’n’ puff (HnP). Instead, the heavy equipment sits idle and the blueprints of the EOR program remain on the shelf as the operator restructures a debt load of more than $7 billion under a court-supervised bankruptcy process.

But despite the uncertainty of Chesapeake’s future—or about when US crude prices will rise to levels that justify EOR operations—the company’s plan for a pilot and subsequent full-scale development in the Eagle Ford is noteworthy in that it would have represented the most ambitious attempt made yet to revive production from a tight-oil play.

“Why would we want to do that? We wanted to do it because we can recover more oil without additional drilling,” said Dave Mohrbacher, a reservoir engineering advisor at Chesapeake and the company’s project manager of what was at one point a 40-person technical team.

Mohrbacher presented a technical paper (SPE 200415) about the team’s efforts to lay the groundwork for a large-scale HnP program during the virtual SPE Improved Oil Recovery Conference held in late August. The adopted workflow calls for a relatively large pilot followed by the conversion of hundreds of wells within 2 to 3 years.

Since 2016, Chesapeake has joined many others in the shale sector in paying close attention to a few small patches of ranch land in south Texas where EOG Resources announced that it had proven cyclic-gas injection was not only technically feasible, but a profitable way to increase recovery rates in tight-oil wells.

The Houston-based EOG demonstrated that, under the right conditions, injecting gas back into shale reservoirs can cause the tiny droplets of oil still trapped inside to swell up. This mobilizes the residual oil by making it less viscous and sticky.

EOG’s success story gave hope to shale producers across North America that the recovery rates of 5–10% of the original oil in place could be elevated to 7–17% by periodically soaking tight-oil reservoirs with miscible natural gas.

Mohrbacher told industry colleagues that Chesapeake made the investment in its EOR program after confirming for itself through analysis and laboratory work that the reported gains of 10–40% in ultimate oil recovery via HnP were valid. Chesapeake was also motivated, he said, to achieve scale at a “more aggressive” pace than its predecessors because of its large position of maturing wells.

The conference paper points out that shale EOR projects run counter to the shale sector’s short-cycle model while noting that the planning and procurement for an HnP project may take as long as 2 years. It also highlights that each pilot well demands at least $1 million to $5 million in capital commitments, mostly due to the cost of the high-power gas-compression systems which come with lead times of 9–12 months.

Thus, less than 300 of the Eagle Ford’s more than 16,000 oil wells are estimated to have been converted to the HnP process—still the most of any shale play in the world. EOG has been able to convert around 50 wells per year while the handful of other HnP well operators in the region have struggled to transition out of small pilots involving two to four wells. Chesapeake took notice of this inertia and devised a way to escape it. 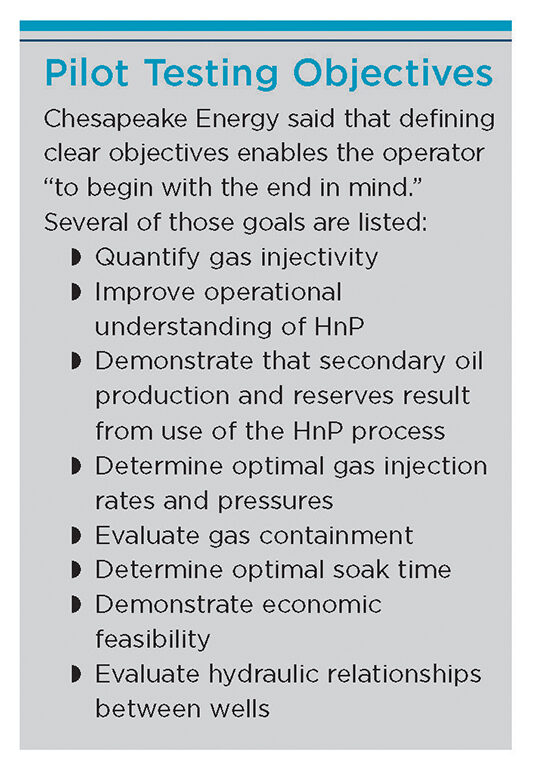 “The thing that makes Chesapeake’s program unique is that we leveraged off work completed by others,” Mohrbacher said. “We’ve looked at existing pilots’ public data in great detail and we decided to start our demonstration project with a rather large program that included between seven and on the order of 30 wells.”

The final pilot criteria settled on a number between seven to nine HnP wells, plus two outside producing wells to act as confinement barriers. Mohrbacher said that this scheme is still large enough to be considered a “phase one development” by shale-sector EOR standards.

This tracks with the thinking of some of those in the tight-knit technical community of shale EOR experts who in a JPT report published last year stressed that small pilots involving two or four wells deliver lower returns than individual HnP projects which involve closer to 10 wells. The smaller projects are said to mask the full potential of widespread HnP operations.

A year after the initiation of the pilot, Chesapeake’s plan calls for at least 100 more wells to be converted to part-time gas injectors. With another 2 years under its belt, the operator expected to gain the know-how to convert 300 wells on an annual basis.

According to public data, Chesapeake operates around 900 wells in the two-county area (La Salle and McMullen) of the Eagle Ford where its EOR operations were slated to begin sometime this year. Had things gone to plan, that means Chesapeake would be on a course to convert just under half of its producing wells to HnP operations within only a few years.

Though there remain some mysteries about shale EOR between operators, Chesapeake’s 4-year journey to the precipice of an HnP pilot underscores just how much there is to learn from public data.

In Texas, HnP projects are eligible for tax exemptions, which also require their operators to submit a few bits of extra data such as gas-injection rates. This not only helps researchers identify HnP wells, but it also gives them big clues on how to mimic the process since injection rates can be married with public production data.

Amanda Baldwin is one of the reservoir engineers that has been working on Chesapeake’s HnP project since its inception. She is also a lead author of the conference paper that describes the workflow Chesapeake created with the reservoir consulting firm NITEC and researchers at the University of Kansas to accelerate the operator’s HnP development process.

Expanding on previous comments, Baldwin said the publicly sourced data from existing HnP projects provided her team with “guiding posts for our assessments.”

Before Chesapeake could settle on a pilot design or even select its candidates, that team first had to sift through all the existing HnP projects in the area for potential analogues. Their focus was narrowed to just the larger ones since its own pilot was to involve at least seven wells.

Extensive background work was then required to study the fluid properties, well performance, and geologic profiles from those industry examples. The analysis also included a review of any facility information available from regulatory filings.

As the list of suitable analogues was winnowed, the technical staff further analyzed the orientation, lateral lengths, and spacing of the wells. Initial gas/oil ratios from public production data were also used to make sure the team’s understanding of fluid properties, an all-important factor in candidate selection, were accurate.

Eventually Chesapeake compiled enough of the public data to build type curves of its industry peers’ projects which allowed it to estimate ranges of their production increases—accounting for both accelerated primary production and incremental recovery.

In the end, Chesapeake boiled it all down into an economic model that it can use to confidently decide how much gas is needed to be injected in order to achieve positive returns from its leases. As that is figured out, the back-office processes must work simultaneously with the engineering team to ensure transportation contracts to source and inject the gas are aligned with the project economics.

The stated goals of Chesapeake’s proposed HnP program suggest that it found the outputs of its economic model favorable.

The authors noted in their paper that average production from HnP projects in the Eagle Ford ranged between 1,000 B/D to 5,000 B/D per project in the first few months of cyclic injections. In one example from another operator, they showed the results of an eight-well HnP operation that was producing about 100 B/D before injections began. Most of these wells were 6 years old—very mature for shale wells—and saw their collective production rise to between 400 and 1,000 B/D after the first few cycles.

But Baldwin reminded that no matter how promising past results may be, in the unconventional sector there really are no perfect analogues to your own patch of rock. “With every area, oil and gas recoveries are different and so you need to asses what your recoveries are in your area, for your wells, for your spacing, for your completion,” she said, highlighting why pilot tests remain a critical stepping stone for operators. 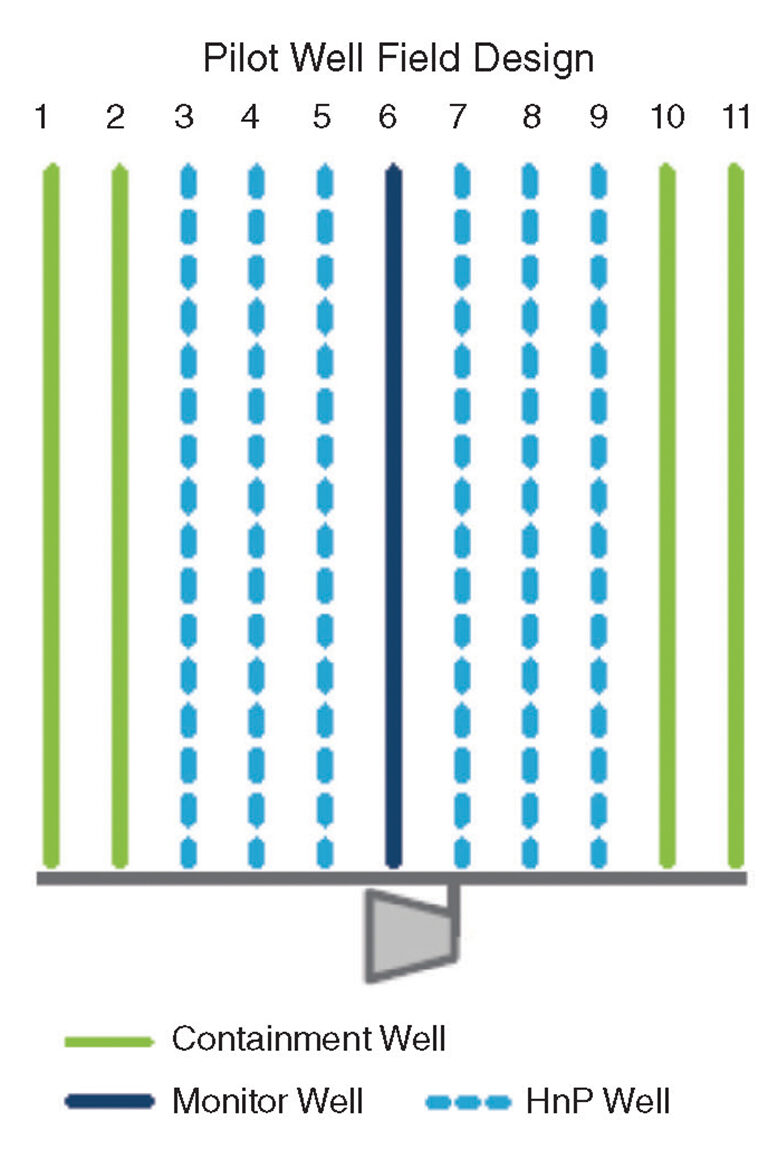 A pilot huff ’n’ puff design for up to 11 wells shows how the operator plans to establish two injection sides on the pad with a pressure barrier in the middle. A monitor well will help isolate the injection side from the production side, and then the process can flip with each injection and production cycle. Source: SPE 200415.

Of course, commodity prices have thrown Chesapeake’s entire timeline into doubt, but speaking practically, Mohrbacher said there are other potential ways that operators about to begin such a pilot could be blindsided.

During the question and answer ­period of the presentation, he was asked about this topic and said the biggest risk to launching the first HnP cycle involves running the facilities side of the equation poorly.

“These are huge gas-handling projects” that require millions of cubic feet of gas per well each day, Mohrbacher said, adding, “I would say the efficiency with which we manage that gas would affect the economics the most.”

The good news is this is one risk factor operators can control themselves. To this end, Mohrbacher also said that the facilities and field staff pegged for the HnP project were involved from the beginning of the pilot-design process.

Offering a few more words of advice, Mohrbacher said operators can avoid other unexpected cost overruns by paying attention to details such as ­whether steel pipes being ordered to transport the gas from the compressors to the wellhead are rated for high pressures. “We actually experienced this,” he said, noting that if the mistake is not found soon enough “you may end up having to go back and redo your design.”

Mohrbacher was queried on other potential facility issues that operators should be aware of but said that there’s not much more to offer for now. “I wish we’d gotten one of those big compressors working before the price of oil declined,” he said, adding, “We’ll learn a lot more about bottlenecks when we actually inject gas.”