Devon Energy and WPX Energy announced today that the two companies plan to merge in an all-stock deal that will create a shale producer with an estimated equity value of $12 billion.

The combined company will move forward as Devon Energy and is to be led by a mixed boardroom and the current top boss of the Tulsa-based WPX. The headquarters will be in Oklahoma City, where Devon is already headquartered.

On a pro forma basis, the merged Devon is aiming for a year-end output of 280,000 B/D, which would make it the fourth-largest producer of tight oil in the US, according to a company release. This will place Devon ahead of several other larger independents in terms of crude flow, including Pioneer Natural Resources, Apache Corporation, and Concho Resources.

The absorption of WPX will add more than 180,000 acres to Devon’s position in the Delaware Basin that stretches across Texas and New Mexico. In sum, the combination amounts to 400,000 acres, about 60% of which lies within the Delaware.

As one half of the prolific Permian Basin, the Delaware has risen in recent years to become one of the most attractive plays for shale explorers and is expected to be the focus of Devon’s production growth going forward.

By joining forces, Devon and WPX hope to shed nearly $275 million in annual costs. About $100 million of this is expected to manifest through drilling and completions efficiencies. Another $75 million in savings is projected to come from netback improvements. The final $100 million in reductions will involve general and administrative cuts.

Executives from both companies stressed that supply chain synergies and a greater negotiating power on services will drive a significant share of the savings. 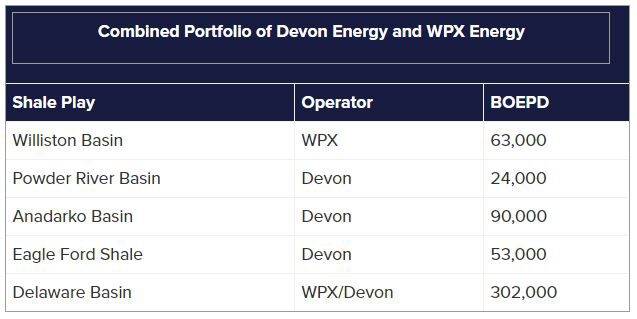 A Merger of Egos

This latest effort to consolidate the shale sector comes only about 6 months after WPX announced its acquisition of smaller independent shale producer Felix Energy in a cash-and-stock deal valued at $2.5 billion. That transaction netted WPX an additional 58,000 acres in the Delaware.

There have been only a small handful of other mergers and acquisitions in the US shale sector this year. The biggest of these was Chevron’s purchase of Noble Energy for around $5 billion in July, a deal many analysts considered more about Noble’s offshore assets in the Mediterranean than its onshore acreage in the Permian.

While presenting details of the merger to investors on a conference call, both Hager and Muncrief attributed the relatively slow pace of US shale consolidation to “social issues” at the executive and management levels. “A lot of times egos can get in the way,” said Muncrief, adding that “control issues” represent the big sticking point that has prevented more deals from coming together recently.

Hagar underscored his belief that this transaction stands out as truly being a “merger of equals” by noting that the last similarly structured deal in the US onshore sector that his team could find was made 18 years ago. “Both sides understand there are social challenges related to this transaction,” he said, adding, “Everybody has to compromise a little bit in order to create something that's even stronger.”

A major component of the combined business involves its “fixed plus variable” dividend which is part of a wider “cash-return” model that prioritizes profits over production growth. Devon will offer a fixed quarterly dividend of $0.11 per share, or about 10% of estimated cash flow. On top of that, investors could see up to 50% of the remaining cash flow distributed back to them on a variable basis each quarter.

“It is the framework that we've been hearing about some time from investors, and the fact that Devon is showing the leadership to do that I think will absolutely separate us from the crowd,” said Muncrief on the adoption of a variable dividend, to which he stressed he is “committed” to executing.

The new plan also calls for Devon to limit asset reinvestment to between 70 and 80% while restricting production growth to no more than 5% annually. Every 1% of production growth will require about $100 million in additional capital, Muncrief said.

He added that Devon needs WTI prices of about $50/bbl before it can start aiming for the 5% growth target. “That’s $10 from where we’re currently trading, so you know we’re going to be very thoughtful around that,” said Muncrief, reminding investors on the call that the company’s leadership is aware that any increase in commodity prices could be temporary.

Weighing in after the announcement of the merger, Alex Beeker, a principal analyst at Wood Mackenzie, said although the shale sector has seen a number of consolidation deals in recent years, “extreme market volatility has slowed the process considerably.” He added that since June, WTI oil prices have stabilized around the $40 mark which is “likely closing the bid-ask spread” between shale producers seeking deals.

Wood Mackenzie’s analysis also casts a favorable light on the key aspects of the deal. “A WPX and Devon tie-up makes sense operationally,” said Beeker. “We like the diversification WPX brings, particularly mature Bakken production. We do expect the combined budget—if the deal closes—to be less than the sum of the parts, so Devon’s cash flow should improve. WPX has a shallower underlying base decline rate than Devon.”

Analysis from Moody’s also found benefits in the transaction, noting that the potential cost efficiencies should more than offset the addition of WPX’s debt to Devon’s balance sheet. In June, WPX reported a debt load of about $3.3 billion and $407 million cash-on-hand. This adds to Devon’s total debt, which at the end of the second quarter was $4.29 billion. Devon reports a cash reserve of $1.6 billion.

“Overall, the asset base is a good strategic fit, significantly increasing the combined company’s Delaware Basin scale, and a new Williston position adds to Devon’s US shale diversification,” read the note from Moody’s.