Hess Corp. has sold its stake in the Shenzi development for $505 million to help pay its share of the cost of developing enormous discoveries offshore Guyana.

The purchase allowed BHP to add 11,000 BOED of production—90% oil—and increase its stake in the Gulf of Mexico field by 28% to 72%, according to the BHP release.

For Hess it is an opportunity to raise money to develop discoveries where the potential reserves, and the cost, are both reaching epic proportions.

“Proceeds will be used to fund our world-class investment opportunity in Guyana,” CEO John Hess said in the announcement. “This sale is aligned with our strategy to preserve cash and preserve the long-term value of our assets in the current low-oil-price environment.”

The number of discoveries on the Stabroek Block, which is operated by ExxonMobil, have reached 18, increasing the potential of the huge block of the South American country with an estimated 8 billion bbl of “recoverable resource.”

When Hess announced the final investment decision on stage three of the project, known as the Payara Field, it forecast that its share of the development costs in Guyana would total $700 million in 2021 and 2022. By then, rising production in the field and possibility higher oil prices should help cover considerably more of the cost of developing a project that is currently expected to include five FPSOs.

To maximize its cash flow, Hess has reduced its Bakken drilling rigs from four to one.

At its last investor earnings call, John Rielly, chief financial officer for Hess, said that with rising production ahead from Guyana “we can fund our way through that cycle and fund our investments in Guyana with our current positions.”

John Hess, chief executive officer of Hess, added that the company has “noncore assets we can monetize.”

BHP also said it was happy with the deal. “We are purchasing the stake in Shenzi at an attractive price, it’s a tier one asset with optionality, and key to BHP’s Gulf of Mexico heartland. As the operator, we have more opportunity to grow Shenzi high-margin barrels and value with an increased working interest,” said Geraldine Slattery, BHP president of petroleum operations. 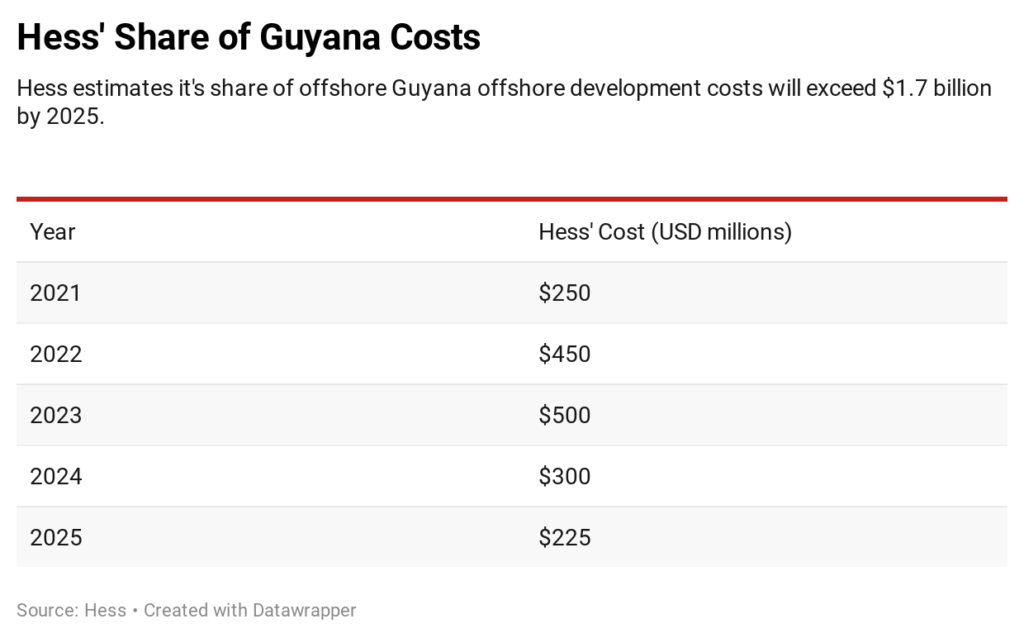