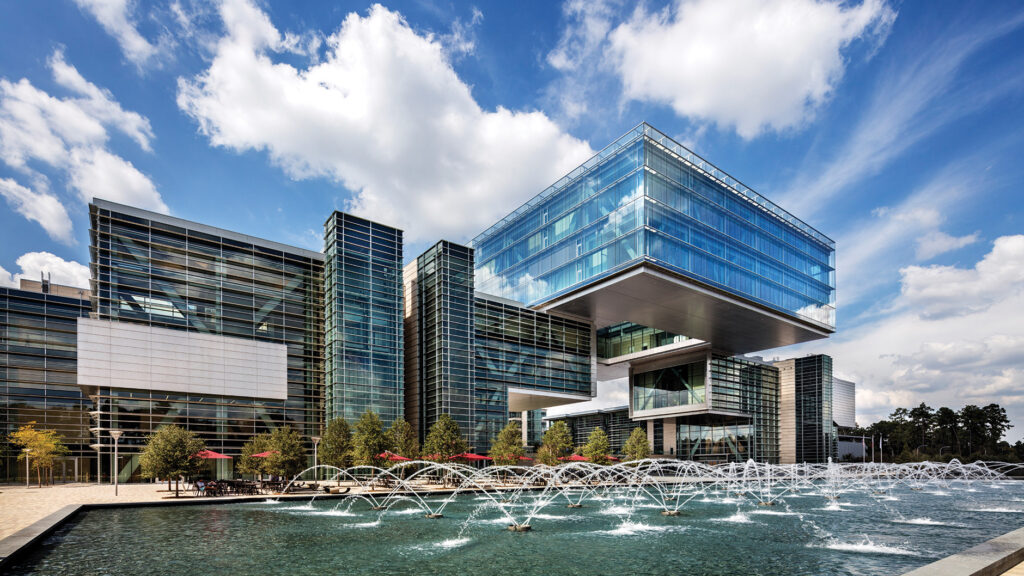 ExxonMobil’s Houston-area campus encompasses 385 acres and opened in 2014 to house up to 10,000 of the supermajor’s employees. Source: ExxonMobil

ExxonMobil said the ongoing demand shock caused by COVID-19 has “increased the urgency” of its plan to reduce costs through a layoff of around 1,900 employees. The supermajor said the downsizing will take place mostly at its main corporate campus located in the Houston suburbs, in a statement issued this week.

“The company recognizes these decisions will impact employees and their families and has put these programs in place only after comprehensive evaluation and thoughtful deliberation,” the statement read.

Broader cuts are on the way and will continue into next year at ExxonMobil. It said it would be cutting its capital spending by 20 to 30% next year as it announced a $680 million loss Friday.

ExxonMobil, headquartered in the Dallas area, confirmed to Bloomberg that its total headcount reduction target is about 14,000, which includes employees and contractors. The company said it will rely on a mix of attrition, redundancy programs that begin in 2021, and caps on new hires to reach its target.

In a public message issued to employees last week and posted on the company’s website, ExxonMobil CEO Darren Woods warned of the cuts and said they would be necessary for the company to become “more efficient and more nimble.”

He continued: “It’s difficult to overstate the devastating impact of the pandemic on businesses big and small, in every community and country around the world. The impact has been especially severe on our industry as energy consumption contracted when economies shut down.”

The open letter highlighted that by April oil demand fell by 20% compared with December’s figures, while global vehicle manufacturing dropped by 60% that same month vs. the previous year. Additionally, April’s commercial air traffic dropped by 70% over the same period a year ago, “dramatically reducing sales of aviation fuel,” said Woods.

All of this also played into the decision by ExxonMobil to not increase its dividend for the first time in almost 4 decades. The company, which has maintained these payouts to investors for over 100 years, said its board of directors approved a cash divided of $0.87 per share, the same figure approved for the third-quarter dispersals.

Also this week, Chevron confirmed to Reuters and other media outlets that a 25% reduction in staffing is planned for Noble Energy, which it acquired in July in a deal valued at $4.1 billion. The cuts amount to about 570 Noble employees.

In a separate push to lower costs, Chevron said earlier this month it would be trimming its own in-house workforce of around 45,000 people by 15%. The company also launched a voluntary severance program in May that runs through December of this year.

Deep cuts in capital spending by the majors will add to the pain already felt in the oilfield service sector.

ExxonMobil said it will lower its capital expenditures to from $16 billion to $19 billion in in 2021, down from $23 billion. The company said at the start of the year that it planned to spend $33 billion in 2021, before the COVID-19 slowdown forced deep, industrywide cuts. The company offered few details about where it would be cutting.

In the Permian Basin, where ExxonMobil is producing more than 400,000 B/D, it will continue to reduce its active rig count, with 10 to 15 working by year end.

Another weak spot is North American dry gas production. ExxonMobil said it is considering whether to cut spending on these assets, which could reduce their $25 billion to $30 billion carrying value.

While ExxonMobil considers what to do with its gas-producing properties, Chevron recently sold its Appalachian natural gas business to EQT Corporation.

Chevron, which announced a $207 million quarterly loss Friday compared with a $2.5 billion profit for the same quarter last year, is ahead of ExxonMobil on cutting capital spending. It reported its third quarter capital expenditures were down 48%, and its operating expenses were 12% lower.

Its capital expenditures included $350 million to acquire Puma Energy in Australia. As the company shifts to growing through acquisition, including its recently completed purchase of Noble Energy, it has reduced spending on finding and developing reserves.

Chevron’s earnings were reduced by lower oil prices as well as $220 million in one-time charges related to an international contract settlement and the cost of “remediation of a former mining asset.”

US Job Numbers Up for OFS and Equipment Industry, But Outlook Remains Unclear

The increase in OFS and equipment sector jobs over the past 2 months came amid higher oil and gas production. But increases in COVID-19 cases are causing uncertainty about when and how much demand will rise.

Chevron is initiating its layoffs of up to 15% of its global workforce of 45,000 first announced in late May by asking employees to reapply for positions. It closed its $4.1-billion acquisition of Noble Energy this week in which it gained 2,200 employees.