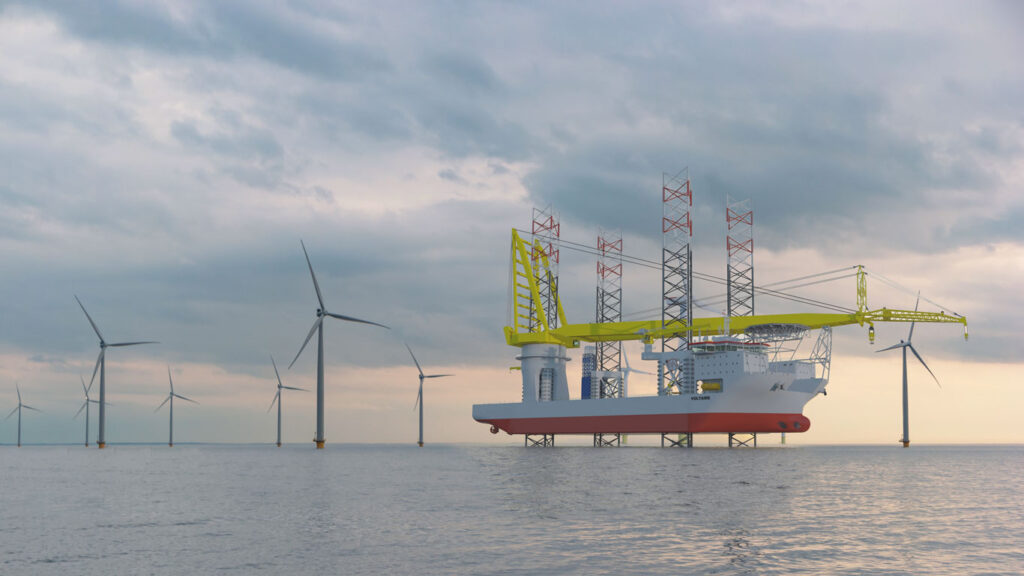 With the recent additions of Dogger Bank (UK) and Empire Wind (US), Equinor is on the path to becoming a global offshore wind major. The offshore jackup installation vessel, Voltaire, with a lifting capacity of over 3,000 tonnes and standing taller than the Eiffel tower, is the largest of its kind in the world. Source: Jan De Nul Group

In one of his first moves since taking the reins as Equinor’s chief executive officer and president, Anders Opedal led the company’s announcement of its ambition to become a net-zero energy company by 2050.

The plan includes emissions from the production and final consumption of energy; sets a clear strategic direction; and demonstrates Equinor’s continued commitment to long-term value creation in support of the Paris Agreement. It includes scope 1, 2, and 3 greenhouse-gas (GHG) emissions, in which scope 3 emissions represent a calculation of indirect emissions from customers’ use of Equinor’s equity-production volumes.

“Equinor is committed to being a leader in the energy transition. It is a sound business strategy to ensure long-term competitiveness during a period of profound changes in energy systems as society moves toward net zero,” said Opedal.

“Our strategic direction is clear. We are developing as a broad energy company, leveraging the strong synergies between oil, gas; renewables; carbon capture, utilization and storage; and hydrogen. As part of the energy industry, we must be part of the solution to combat climate change and address decarbonization more broadly in line with changes in society,” he said in the introduction to the company’s new climate roadmap.

“The new climate roadmap illustrates our pathway to be a shaper in the energy transition and the future of energy. It is also an invitation to our partners, customers, suppliers and governments to work together on the necessary actions to combat climate change,” said Opedal.

“Over the coming months, we will update our strategy to continue to create value for our shareholders and to realize this ambition,” he continued.

Equinor said it expects to deliver an average annual oil and gas production growth of around 3% from 2019 to 2026, and will continue to develop competitive and resilient projects while maintaining industry-leading recovery rates, unit costs, and carbon efficiency. The company believes the net-zero ambition will strengthen future competitiveness and value creation on the Norwegian continental shelf (NCS) and stated in a press release that its plans for production, development, and exploration on the NCS remain firm.

Beyond 2030, the Norwegian major said it is preparing for an expected gradual decline in global demand for oil and gas and emphasized that value creation, not volume replacement, is and will be guiding its decisions. In the longer term, Equinor expects to produce less oil and gas than today.

Equinor said renewables will be a significant growth area. The company plans to expand its acquisition of wind acreage to accelerate profitable growth and will continue to leverage its leading position in offshore wind. To further demonstrate its commitment, Equinor will establish renewables as a separate reporting segment from first quarter 2021.

Building on its capabilities from oil and gas, Equinor said it is well positioned to provide low-carbon technologies and establish zero-emission value chains. It is driving the development of these technologies through projects such as Northern Lights, which aims to store CO2 from industrial sites across Europe. Equinor also assumes that an increasing share of oil and gas will be used for petrochemicals toward 2050.

By removing CO₂ from natural gas, the company believes it can produce emission-free hydrogen that can be used in industrial settings, such as power generation and marine fuels as well as residential ones, such as heating. Equinor is currently involved in several hydrogen pilots and projects,

The maritime sector, which is carbon intensive, has been identified as a key sector for Equinor to partner with to develop low-carbon solutions and address emissions from consumption. The company is currently testing the applicability of zero-carbon ammonia as a fuel, both as a buyer and supplier.

The oilfield service company said it expects to set emissions-reduction targets by next year to meet the goals of the Paris Accord.