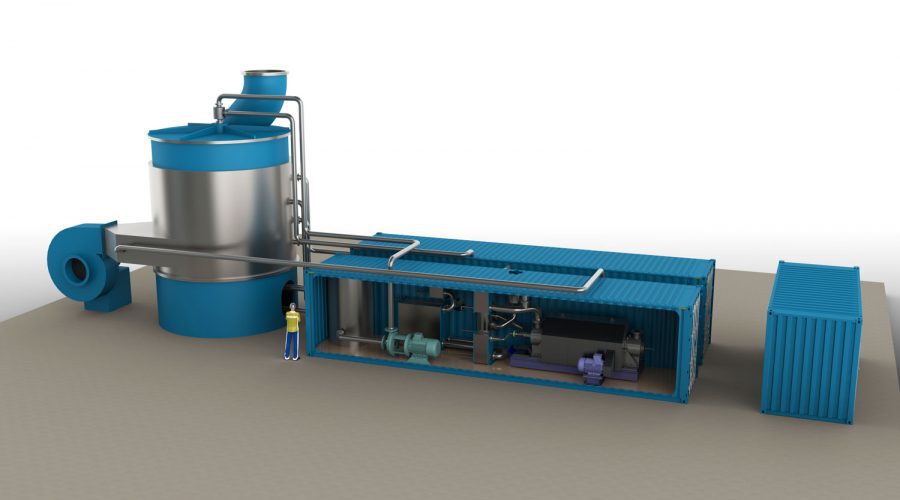 An illustration of an industrial-scale carbon-capture plant that at demonstration size would be capable of sucking up 10,000 tonnes of CO2 per year. Plans are to enable the design to scale up to 1 million tonnes of captured CO2 annually. Source: Compact Carbon Capture.

Baker Hughes is buying a startup called Compact Carbon Capture to bolster its energy transition strategy, the company said today in an announcement.

Baker Hughes described carbon-capture technology as “critical” for the energy industry and that it “is among the most viable decarbonization paths” for both retrofitting existing assets and greenfield projects.”

“We are positioning our portfolio for new energy frontiers, and we believe there will be strong growth potential of carbon capture for both industrial applications and oil and gas projects,” Baker Hughes’ Chief Executive Officer Lorenzo Simonelli said in the statement.

The Bergen-based Compact Carbon Capture is developing technology that it hopes to someday install at industrial sites around the world.

True to its name, its core product is a modular CO2-capturing system that relies on high-speed rotating solvent-based beds that rely on static-based columns to absorb the greenhouse gas. The company said that compared to the traditional technologies, its platform requires 75% less area to achieve the same throughput.

The smaller footprint that this concept affords opens its potential market to crowded refineries or facilities notorious for having limited real estate, such as offshore oil and gas platforms. Outside of oil and gas, Compact Carbon Capture is targeting waste-to-energy plants and ship installations.

Simonelli added that Baker Hughes will incubate the technology to a point that the company can offer “one of the industry’s lowest cost-per-ton carbon-capture solutions.”

Baker Hughes did not disclose terms of the deal. The announcement implied that both companies are exploring synergies with Baker Hughes’ existing line of turbomachinery that was inherited from its previous owner GE.

Compact Carbon Capture was founded in 2018 but its roots trace back to technology patented in 1999 and a subsequent research and development project funded by Equinor in 2007. The company was also part of Spanish oil company Repsol’s technology accelerator program.

The expanded additive manufacturing services widen the companies’ targeted industries to include oil and gas, renewables, maritime, and aerospace.

To reach their targets for carbon neutrality, many oil and gas producers are investing in other energy industries. This US company will instead get there by investing more in its oil fields.

As it reaches for net-zero emissions, the company said its operations offshore Norway remain central to its long-term strategy.