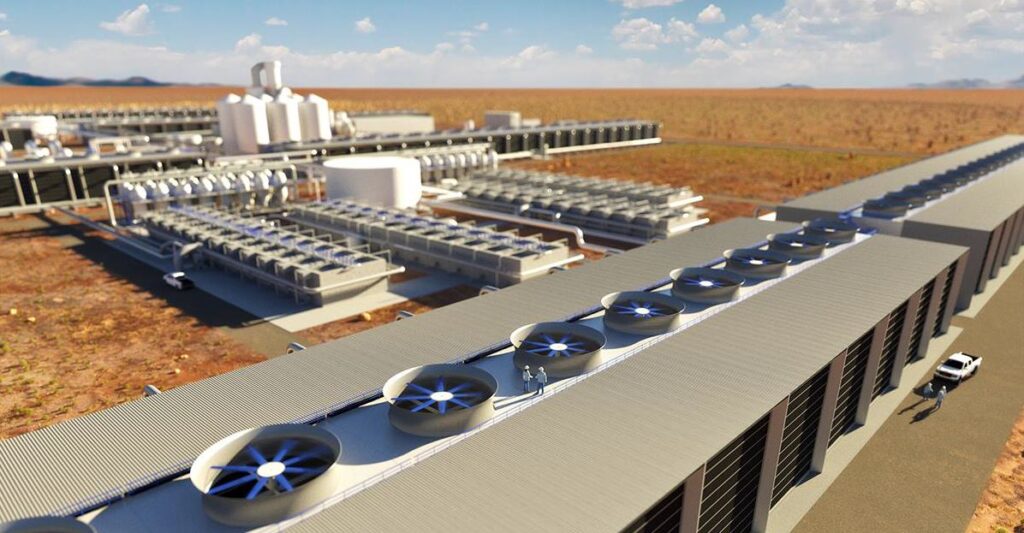 The first rendering of what is to be the world’s largest direct-air-capture-plant in the Permian Basin. The facility is expected to capture up to 1 million metric tons of CO2 annually for enhanced oil recovery operations in Texas. Source: Occidental Petroleum

Occidental Petroleum (Oxy) announced this week that it is joining the race to net-zero carbon emissions.

The first step will be to eliminate or offset emissions from its own operations by 2040. The more ambitious leap will require the Houston-based company to do the same for all the oil and gas products it sells by 2050.

While Oxy may seem a fast follower on setting such targets, it is undeniably taking a road less traveled.

In sharing the decision with investors, Oxy CEO Vicky Hollub pointed out that US oil company is taking a “contrarian approach” compared with European majors that have largely led the industry’s low-carbon movement by investing in alternative energy systems.

Instead of “trying to go learn a new business,” Oxy will double down on its decades of experience in CO2-enhanced oil recovery (EOR) to make carbon sequestration a major source of long-term revenue, Hollub said.

“This not only helps us to help the world by reducing CO2 out of the atmosphere, it will help our shareholders too by lowering our cost of enhanced oil recovery in the Permian and in other places as we advance this out,” she added.

“And thirdly, this helps others because we’re going to be able to expand beyond our own operations to give opportunities to those industries that can’t otherwise lower their carbon footprint—they can partner with us to do it.”

Oxy’s plan also stands in contrast to those announced by fellow US producers that have committed to notable but less-stringent net-zero goals.

ConocoPhillips announced last month that it will seek to negate its Scope 1 and Scope 2 emissions by 2055. Scope 1 refers to the emissions generated by a company’s operations while Scope 2 expands to the indirect emissions created to support those operations such as electricity sourcing.

What Oxy aims to do by 2050 is offset the totality of its Scope 3 emissions. For an oil and gas company, this category primarily involves the combustion of its products by the world’s energy consumers.

Proponents of this step argue that the large investments required to offset consumer usage of hydrocarbons will pay off by ensuring the upstream industry’s long-term sustainability. A massive expansion of CO2 EOR is considered essential to achieving this objective.

Oxy currently stores about 20 million metric tons (Mt) of CO2 per year in geologic formations via its various EOR operations, the most of any company in the world. However, nearly all that CO2 comes from naturally occurring geologic sources.

To make a dent in atmospheric CO2, the company has spent the past decade developing a portfolio of emerging carbon capture and storage technologies, some of which are now ready to scale up.

The centerpiece of Oxy’s net-zero plan, at least in the short term, will be the world’s largest direct-air-capture facility in the Permian Basin. During its announcement, Oxy shared the first renderings of the facility in which it expects to capture 1 million Mt of CO2 per year.

The company said the large-scale facility will supply “low-cost CO2” that will be stored in the aging oil fields it operates in Texas. Design work begins early next year, and construction is slated to start sometime in 2022.

The project is being executed through an Oxy subsidiary called 1PointFive which it formed through its low-carbon venture group and California-based private-equity firm Rusheen Capital Management.

The Permian facility is hoped to be just the first of several. The joint enterprise aims to install direct-air-capture plants in Oxy’s other operating areas in the US and along the US Gulf Coast where the majority of the country’s refineries and petrochemical plants are located.

Hollub also mentioned that after the US, more plants could come to Oman, Abu Dhabi, or Algeria—all places where Oxy operates with national oil company partners.

“This is something that the world needs. Without us pushing it and without others doing this, there’s no way that the world could achieve a cap on global warming of 1.5° or 2°,” she said, referencing the climate goals from the 2016 Paris Agreement. “But, unless you can make it a business, unless you can make it profitable, it’s likely not to happen.”

The money-making potential of Oxy’s carbon-capture business hinges in large part on US tax credits that offer companies a credit of $35 per Mt of CO2 sequestered via EOR.

While the cost of the first direct-air-capture plant has not been determined, the CEO guaranteed that optimizations will be made and believes the scaleup of this technology could ultimately “be faster than what we’ve seen in solar and wind.”

Within 10 to 15 years, Oxy’s CO2-capturing business, which includes other low-carbon technologies, will be similar to or greater than what the company earns from its chemicals business, Hollub said. This does not imply that Oxy has any plans to divest from the chemicals business, as one investor asked during the announcement.

To the contrary, Hollub emphasized that the two businesses are complementary. Oxy’s chemical business supplies two of the products required to build these plants, PVC (polyvinyl chloride) and potassium hydroxide, the latter of which Oxy is the largest supplier in the US and second largest globally. “And we’ve known this all along, and we want to capitalize on this,” she said of the business synergies.

In February, Oxy also announced that it would seek to reduce its emissions profile by ending routine flaring by 2030, making it the first US oil company to do so.

To go big on capturing CO2, the oilfield service company is acquiring a company that specializes in going small.

As it reaches for net-zero emissions, the company said its operations offshore Norway remain central to its long-term strategy.