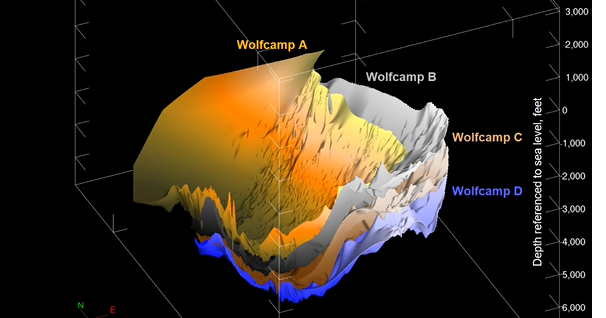 US Energy Information Administration
The Wolfcamp formation in the Midland Basin, which is part of the Permian Basin, has attracted many oil companies because of its stacked potential. Shown here is a structure and thickness map for the formation.

A private-equity firm has agreed to put in $900 million to start a company that will buy US oil and gas operations with a focus on finding more oil.

The equity investment by Oaktree Capital Management is far below the records set when the industry was looking up, but with acquisitions activity at a crawl, the timing is striking.

The funding was raised by two executives from the management team of Felix Energy, a company whose timing was serendipitous– it closed its sale to WPX Energy on 6 March 6, just as energy markets were beginning to recognize the devastating impact COVID-19 would have on oil demand and prices.

Now, they appear to be among the first to raise cash to go bargain hunting.

“We understand the [acquisitions] opportunity set requires a sizable equity commitment as well as flexibility and creativity when structuring transactions. Our partnership with Oaktree fulfills each of these requirements, which will be a key differentiator for us,” said Ben Jackson, FourPass Energy CEO, in the announcement.

Oaktree is betting Jackson and Andrew Dunleavy, vice president for land and business development, will be able to make money in a depressed business, based on their experience over “a challenging market cycle from 2013 to 2020,” according to the announcement. Jackson was the vice president for reservoir engineering at Felix and  Dunleavy was vice president, land.

Few details were offered about their strategy. FourPass said it was looking for oil and gas production, with an emphasis on oil, that can be efficiently integrated and operated at a low cost. The release also said that “certainty of close” will be also be a priority, suggesting a wariness of targets that might try to parlay an offer into a higher bid.

This terse description will leave their options open. And there could be quite a few out there.

While there have been some huge combinations of large US independents, such as ConocoPhillips and Concho Resources, there have been few smaller deals made to buy companies or properties.

“Traditionally, this is the type of market where private equity thrives by taking advantage of those opportunities. What has been different this time is that there hasn't been all that much private-equity deployment into the upstream space through this downturn,” said Andrew Dittmar, senior mergers and acquisitions analyst for Enverus.

“What has occurred is mostly smaller deals for assets sold at a deep discount via Chapter 11 bankruptcy processes,” he said.

Laredo Petroleum has been doing small deals that increase its footprint in Howard County in west Texas. The company reported paying $2,200 per acre, a fraction of the price recorded during the Permian’s boom years. Rather than growth, its third-quarter investor presentation said it was shifting its production to more profitable oil and seeking efficiency gains, such as adding acreage to allow it to drill 10,000-ft laterals more efficiently.

The attention has been on the big deals, which included the company that bought Felix, WPX Energy. In September, Devon Energy and WPX announced an all-stock merger which is expected to close in the first quarter of 2021.

Dittmer’s comment at the time the deal was announced alluded to negative reactions by investors to acquisitions, which goes back to last year.

While consolidation is needed, and likely, he said the markets response “will likely play a role in the urgency with which other E&Ps pursue their own consolidation efforts.”

Since that deal was announced, shares of Devon are up nearly 50%, suggesting the timing may be right to buy oil and gas acreage.

The two Calgary-based heavy-oil companies have closed on their all-stock deal that was valued at around $2.9 billion when it was announced in October.