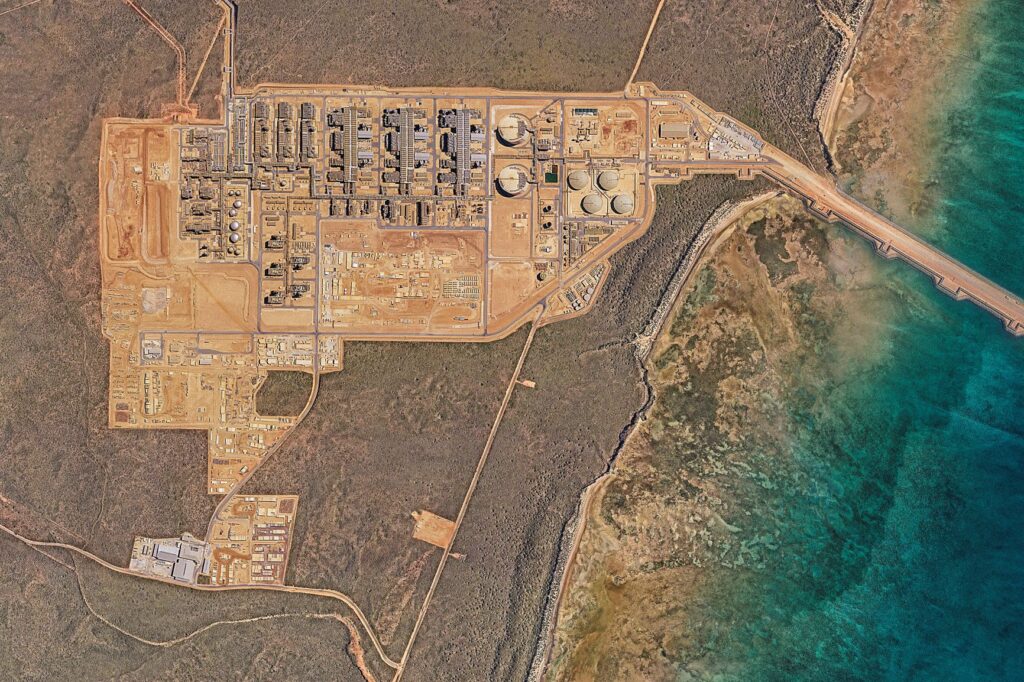 Chevron’s Gorgon LNG plant on Barrow Island, off the coast of Western Australia, began operation of one of the world’s largest offshore CCS projects in 2019. Source: Chevron

This year approximately 40 million tons of carbon dioxide (CO2) will be captured from the world’s power and industrial facilities, according to the International Energy Agency. This is a mere fraction of the total emissions of some 51 billion tons.

The Melbourne, Australia-based Global CCS Institute (GCCSI) said recently that global installed capacity of carbon capture and storage (CCS) must increase more than a hundredfold on today’s levels for the technology to play its vital role in reducing CO2 emissions and reaching net zero by 2050. To facilitate this rapid escalation in deployment, the GCCSI said significant commitment from the finance and investment community is required.

“If the world is to have any hope of meeting the goals of the Paris agreement and, most significantly, achieving net-zero emissions by mid-century, CCS deployment must accelerate at a rapid pace. The finance and investment sectors are vital to realizing these ambitions,” the institute reported.

“Clear guidance and substantive CCS-specific analysis will be essential for these sectors to understand both the value of CCS to low-emissions portfolios, and how investment in the technology may be seen as mitigating climate-related risks.”

In recent times, the institute said, it has witnessed increased interest from this sector, and there is no doubt that CCS is being recognized as generating value to investment portfolios that are aligned with achieving global climate-change goals.

However, many in the financial and investment sector are unaware of the current status of CCS deployment, or the significant abatement potential it offers to a range of emissions-intensive processes. Overall, the role of CCS in within this emerging environment, particularly as a practical and visible means of mitigating CO2 emissions, remains largely unexplored.

If current and planned activities by energy companies from around the world are any indication, the situation may be about to change, as global scientists look to deploy CCS technology offshore.

Australian and Japanese companies are studying plans to capture carbon dioxide from industrial emitters in Asia and store it under the ocean floor off the coast of Australia.

Perth-based Transborders Energy is collaborating with partners including Tokyo Gas and Kyushu Electric Power on proposals to ship emissions from heavy industry in Australia and potentially across the Asia-Pacific region and use a floating hub to inject the material under the seabed. The project aims to capture 1.5 million tons a year.

Australia is one of the highest per-capita CO2 emitters, thanks to its booming energy export industry. The national government is promoting nascent carbon-capture technology, which has so far only been used onshore, as part of what it calls an innovation-based approach to lowering emissions.

“Often there’s a lot of good geological data that’s been collected for the purpose of oil and gas exploration, that gives you an enormous head start in terms of the primary data necessary to identify the prospective areas,” said Alex Zapantis, general manager, commercial at GCCSI.

Another Australian project, CarbonNet, aims to store as much 5 million tons of CO2 annually in the Bass Strait off Australia’s southeast coast and aims to be operational by 2030.

Chevron’s Gorgon LNG plant off the coast of Western Australia began operation of one of the world’s largest CCS projects in 2019 after several years of delay. The Carbon Dioxide Injection Project facilities inject and store reservoir CO2 into a deep reservoir unit, known as the Dupuy Formation, more than 2 km beneath Barrow Island. This is expected to reduce greenhouse-gas emission from the Gorgon Project by approximately 40%, or more than 100 million ton over the life of the injection project.

Santos is working on plans to bury 1.7 million tons of CO2 a year at its Moomba gas processing plant in South Australia. The Adelaide-based company just announced that it would collaborate with Mitsubishi on opportunities arising from the Moomba project, including the potential to offset emissions from the Barossa liquefied natural gas project.

In Europe, the Northern Lights initiative, backed by the Norwegian government, Royal Dutch Shell, Equinor, and Total, plans to store 1.5 million tons of CO2 per year under the North Sea, beginning as soon as 2024, with long-term plans to scale the operation to 5 million tons.

Addressing the “E” in ESG

“The ‘environmental’ aspect of the ESG acronym [environmental, social, and corporate governance] has proven particularly significant for the finance and investment communities,” said the GCCSI. “More specifically, it is the risks and challenges of climate change that pose the greatest concern for many and investors and financiers are increasingly seeking information on a company’s response to climate change.”

“Our early experience suggests that when the technology is accepted as a commercially viable form of mitigation, the ESG-related benefits of CCS will be of interest to both investors and companies,” said the institute, referring to a study it completed at the request of the US Department of Energy to examine the significance and extent of the influence of ESG ratings in supporting investment in CCS project deployment.

It may be that the current and upcoming under-the-seabed CCS projects will put the hoped-for spotlight on the technology.

After Another Discovery in Suriname, Apache and Total Change Direction