Gazprom Neft and Shell announced they have closed on a joint venture (JV) to study and develop the Arctic onshore Leskinsky and Pukhutsyayakhsky license blocks on Russia’s Gydan Peninsula.

Novotek is expanding its operations by siting its Arctic LNG-2 project in Gydan, heightening interest in developing commercial reserves on both sides of the Ob River estuary that flows to the Kara Sea and export markets east and west.

Gazprom Neft and Shell will each hold a 50% interest in the JV’s charter capital. The partners will manage the venture equally with intent to develop a promising exploration cluster in the northeastern part of Gydan, Gazprom Neft noted in a press release.

The Leskinsky license block covers an area of more than 3,000 km2, with resources potentially in excess of 100 million tons of oil equivalent (MTOE) in the Taymyr district of Krasnoyarsky Krai.

Adjoining the Leskinsky block, the Pukhutsyayakhsky block, located in the Tazovsky district of the Yamal-Nenets Autonomous Okrug, covers an area of over 800 km2, with resources estimated at around 35 MTOE, Gazprom Neft’s press service reported.

2D seismic surveys have been completed at both blocks and prospecting and appraisal activities are ongoing at the Leskinsky block to gather data to refine the geological concept and prepare a future project development plan. Gazpromneft-GEO will be the operator on the first stage of the project, responsible for exploration works at both blocks, the release noted.

News that terms of the JV (announced in summer) had been concluded, came at a meeting 2 December in St. Petersburg between Gazprom Neft Deputy CEO for Exploration and Production Vadim Yakovlev and Shell Country Chair Russia Cederic Cremers. At that meeting, Yakovlev and Cremers also signed two Memorandums of Understanding on cooperating in reducing greenhouse-gas emissions, and on improving air-transport safety.

“Gydan is an area of strategic interest for Gazprom Neft,” Yakovlev was quoted as saying in the release. “Our collaboration with Shell already stands at more than 10 years’ duration and continues to grow —including in sharing best practices, both in production and in environmental and industrial safety.” 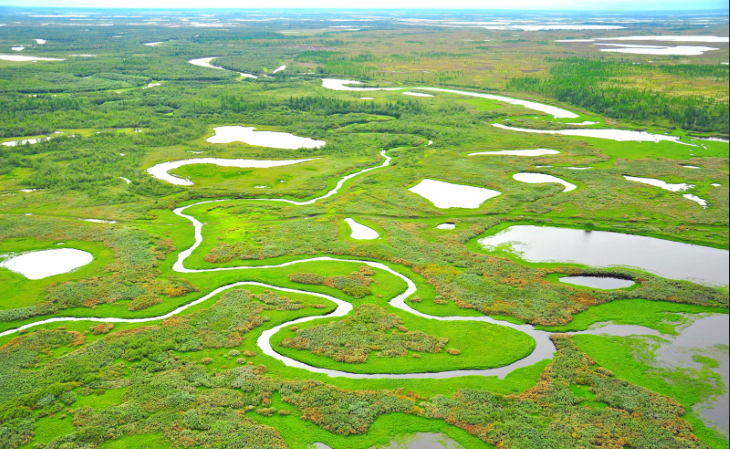 Aerial view of the fragile nature found in the Yamal and Gydan peninsulas, where major clusters of oil and gas reserves are under study. Source: Novatek Press Service.

For its part, Shell appears to be playing a long game in Russia with a strategy that looks beyond the current sanctions and to a time when activity in Yamal and Gydan will mature to play a pivotal role in global hydrocarbon production in the Arctic and LNG production.

Shell has been part of post-Soviet Russia’s hydrocarbon landscape since 1992 when it entered the offshore Sakhalin-2 consortium (today’s Sakhalin Energy in which Royal Dutch Shell plc still holds a 27.5% minus one share).

Shell also developed the state-of-the-art technology for Russia’s first LNG production facility  and export terminal—the Sakhalin LNG plant at Prigorodnoye on the southern tip of Sakhalin Island. The production capacity of the plant is 9.6 mtpa of LNG.

Onshore, Shell (as Shell Salym Development BV) partners on a 50-50 basis with Gazprom Neft in Salym Petroleum Development, which since 2003, has been developing the Salym group of oil fields (including the West Salym, Verkhnesalymskoye, and Vadelypskoye fields) in the Khanty-Mansi Autonomous Okrug.

The joint venture has pioneered “smart field” technology in West Siberia and is also developing and testing advanced methods of enhanced oil recovery, focused on chemical flooding of the formation with a three-component mixture of alkai, surfactant, and polymer called ASP.

In 2018, the use of this technology in the depleted section of the West Salym field raised the oil recovery factor to 69%, almost double the average for the Russian oil industry.

Referencing Shell’s next-generation Russian challenge, Cremers said of the newest Gazprom Neft deal: “Shell welcomes the opportunity that the Gydan project brings to strengthen our longstanding cooperation with Gazprom Neft. Our successful track record of working together developing the Salym fields gives me great confidence in our companies’ ability to conduct the exploration program in accordance with high technical, environmental, and social standards.”