Diamondback Energy announced today that it is acquiring fellow Permian Basin oil producers QEP Resources and Guidon Energy in separate deals that have a combined value of around $3 billion.

On a pro-forma basis, the double acquisition will boost Diamondback’s holdings to over 276,000 acres in the Midland Basin where all three companies operate adjacent leases.

The all-stock deal for QEP is valued at $2.15 billion, which includes the assumption of $1.6 billion of debt. QEP shareholders will receive a 0.05 share of Diamondback common stock for each share of QEP they own.

QEP holds 49,000 acres in the Midland Basin portion of the Permian region where it produced an average of 30,500 B/D.

QEP produced another 17,800 B/D during the third quarter from its positions in the Williston Basin. Diamondback said it considers QEP’s assets in North Dakota’s Williston Basin to be “non-core and will be used to harvest cash flow,” or it may sell the fields to pay down debt.

The buyer also expects the elimination of overlapping overhead and the utilization of other synergies will create up to $80 million annually in value for the acquired QEP assets.

The privately equity-backed Guidon has agreed to a purchase price valued at $863 million; $375 million in cash and over 10 million shares of Diamondback’s common stock.

Guidon owns close to 32,500 acres in the northern Midland Basin and showed an averaged crude output during the third quarter of 11,600 B/D. The company holds an estimated 395 future drilling locations that could accommodate long-lateral wells of over 10,000 ft.

Energy market analysis firm Enverus noted that QEP has been considered a prime target for aqusition for most of this year given its large position of economic assets. "The acquisition of QEP by Diamondback fits firmly within the mold established for 2020 public E&P consolidation. The deal is structured with no premium and all-stock consideration. It focuses on immediately boosting cash flow to fund shareholder capital returns and debt reduction," said Enverus in a statement.

Travis Stice, CEO of Diamondback, said in the announcement that upon closing the operator will devote most of its spending to increasing output from the consolidated position in the northern Midland Basin.

The deals come after many of Diamondback’s similarly sized peers have either merged or acquired smaller rivals. Industry analysts have discussed for months whether Diamondback, one of the least levered of the large US onshore producers, was on the verge of making similar moves or content with sitting on the sidelines.

In the end, Diamondback could not turn down the opportunity to create a consolidated position in one of the Midland Basin's higher-returning areas.

“As stated in past public commentary, Diamondback does not need to participate in industry consolidation to simply get bigger. We participate in corporate development opportunities that we firmly believe will increase the long-term value of our stockholders’ investment,” Stice said in the company statement.

Diamondback said that despite adding more than 80,000 acres to its positon, it will hold production flat throughout most of next year "in the most capital efficient manner possible."

Both deals are expected to close in the first quarter of 2021. 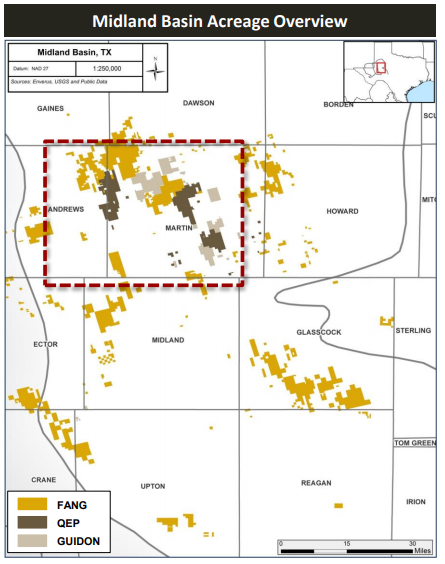