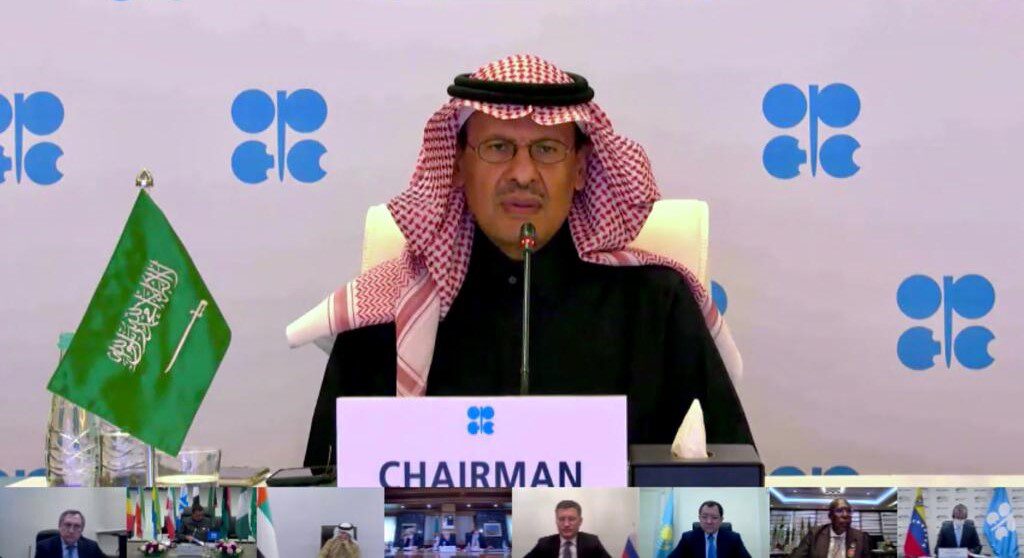 Prince Abdulaziz bin Salman, the Saudi energy minister and chairman of the OPEC and non-OPEC ministerial meeting, speaks to other energy officials at this week’s meeting which was held remotely due to the ongoing COVID-19 pandemic. Source: OPEC

In a bid to moderate global crude prices, Saudi Arabia announced on Tuesday that it will voluntarily reduce its oil production in February and March by around 1 million B/D compared with January’s level.

Prince Abdulaziz bin Salman, the Saudi energy minister, broke the news himself at the conclusion of this week’s meeting between OPEC and non-OPEC producers, known as OPEC+, where he said the Kingdom will limit its output to around 8.1 million B/D.

“We do that willingly and we do that with the purpose of supporting our economy, the economies of our colleagues,” said Abdulaziz during a joint press conference held remotely after the meeting.

He described the unexpected cuts as a “gift’ to the other members of the oil cartel and its allies but also said it was a preemptive move to protect oil prices and give Saudi Arabia “much better room in the future to maneuver.” He added, “Prudence is part of our Bedouin DNA.”

Abdulaziz encouraged other OPEC+ members to be prudent as well and adhere to their previously agreed upon cuts while urging the overproducers in the group to compensate by further curtailing their supply.

Other OPEC+ members will collectively reduce production by an additional 425,000 B/D over the following 2 months.

Crude markets responded immediately to the development, rallying US oil futures for February by nearly 5% to settle at $49.93. Brent crude saw a similar spike and settled at $53.60 on Tuesday afternoon.

There are reasons to be skeptical that this latest move to buoy crude prices will work. Market analysts have pointed out that Saudi Arabia’s voluntary cuts do not represent an official agreement with OPEC+, meaning that it is subject to change.

“It remains to be seen though if even Saudi Arabia will follow suit to its promise today and cut by as much as it will say, as more projections and market events come up in coming weeks,” said Bjornar Tonhaugen, head of oil market research at Rystad Energy.

“A 1 million B/D is a deep and painful production curtailment, and the act will paint a big question mark over the Saudi strength in the alliance,” he added.

Iraq and the UAE were considered among those pushing against cuts and for an increase in allowable output by at least 500,000 B/D starting next month.

However, when the agreement was settled, only Russia and Kazakhstan were granted permission to raise production during the 2-month period. Russia will lift its ceiling by 65,000 to 75,000 B/D while Kazakhstan will raise output by 10,000 B/D.

Both countries said they needed the flexibility to avoid shutting in production during the rest of the winter season when maintenance is most difficult.

He also spoke optimistically about the ability of the COVID-19 pandemic to be brought under control in the coming months, a tacit indicator of where Russia stands on making more cuts this year.

“We positively believe in the effect of vaccines,” said Novak, adding that as lockdowns and travel restrictions are relaxed, the global economic recovery will continue. “We believe that we’re on a positive trajectory.”

Later though, Novak took a more cautious tone, saying that “the market is still very fragile; there's still a lot of uncertainties and all our steps should be very carefully placed.”

Nigeria is one of the countries that has agreed to make up for several months of overproducing. In July, Nigeria was overproducing its quota by more than 300,000 B/D. By December, the overproduction figure dropped to around 100,000 and is on pace to be “completely liquidated” by the next OPEC+ meeting in March, according to Timipre Sylva, Nigeria’s minister of state for petroleum resources.

In December, OPEC+ agreed to raise its production ceiling by 500,000 B/D in January, limiting the total cuts across the group of major oil-producing states to 7.2 million B/D.

Further increases of up to 500,000 B/D are expected to be tabled by several members at the next meeting.

Management of Reserves in Mature Oil and Gas Fields

The complete paper outlines some of the challenges involved in late-life field management and how Reserves assessment may be affected.