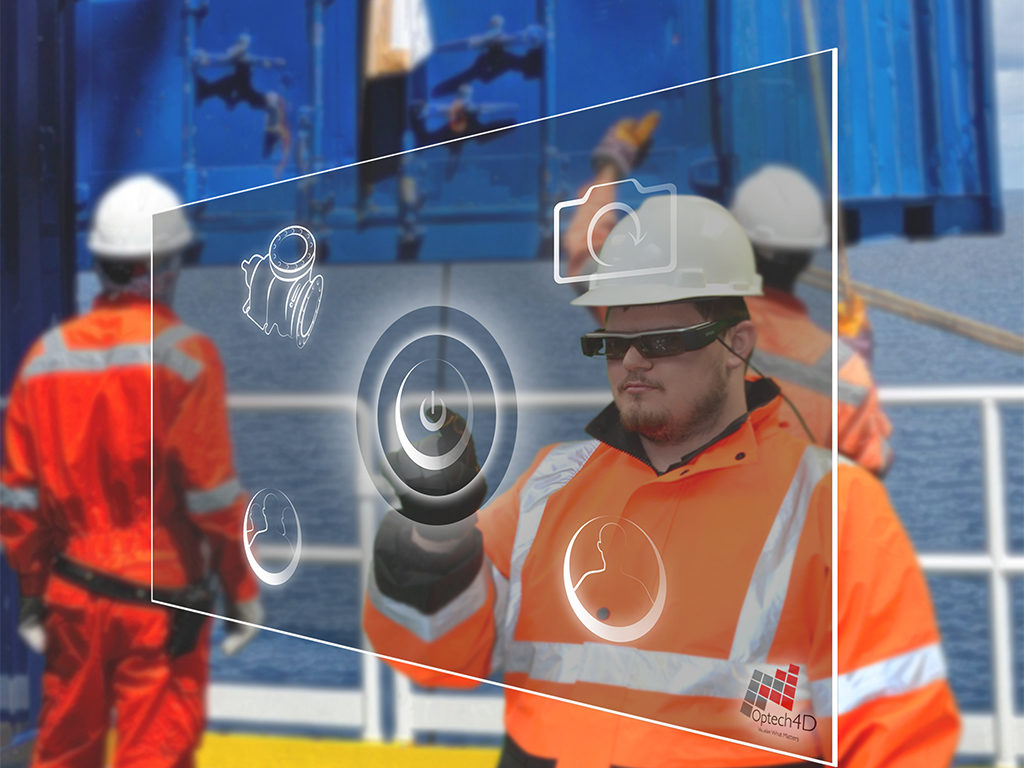 Optech4D
An illustration depicts what an oilfield worker sees in his field of view while using augmented reality glasses. Technology developers from various sectors say the technology enhances productivity and can improve safety.

If you were at the Offshore Technology Conference in Houston this year you may have noticed the increasingly popular trend of exhibitors using virtual reality (VR) headsets to engage with attendees.

The unique visual and immersive qualities that make these devices such great marketing tools are also what some in the oil and gas industry say make them such powerful training tools.

VR technology has come a long way since its clunky ancestors were first introduced in the 1990s. Thanks to high-resolution screen technology and powerful gaming engines, the latest generation has been deemed by the techno-experts as ready for prime time. Equally important, VR has become affordable; some of the high-end devices now sell for only a few hundred dollars.

This confluence of capability and cost is why Vincent Higgins left his job as a senior-level industry consultant to become the founder and chief executive officer of Optech4D. The 4-year-old Houston-based startup develops custom training programs that recreate oilfield and facility environments inside the VR devices.

“I had an idea around simulation that I thought could really be of value,” Higgins said, adding that with VR “you have this visceral experience of being there and it’s as if it is actually happening. That adds a level of learning that you could never get in any other situation.”

The company also creates programs for a similar technology called augmented reality (AR). Instead of presenting users a computer-generated world, AR gives people an enhanced version of the real world complete with contextual information about where they are, where they are going, or what is in front of them.

Analysts are predicting that 2016 will be a watershed year for both VR and AR. Global market research firm Gartner said in a recent report that more than 1.4 million devices will be sold this year—a tenfold increase over last year—and that by 2017 the number of shipped units will jump to more than 6 million.

According to its website, Optech4D has so far done work for oil companies Eni and Shell along with the industry construction giant Bechtel and rotating equipment supplier Dresser-Rand. For one of its operator clients, Optech4D designed a VR-based helideck officer training program that performed so well the company has begun certifying trainees onshore instead of spending millions each year on flying them offshore to become certified.

Higgins noted that VR training allows supervisors to digitally track every move a trainee makes and they can throw them into scenarios too dangerous to recreate in the real world, such as crashing a helicopter onto the deck of an offshore rig. Workers can also plug into the VR devices wherever they are for training-on-demand.

One of the company’s next projects is to develop a well control VR simulation that would serve as an alternative to the more expensive well control schools. Down the road, Higgins wants to simulate well cementing and routine operations such as the inspection and maintenance of blowout preventers.

Many of those in this space like to point out that not only are younger workers in need of the most training, they are also the most likely group to embrace this new approach. Since they grew up playing the very video games that helped drive the technology to commercial readiness, Higgins said young people intuitively adapt to VR. “They get in there and they learn almost immediately using virtual reality,” he added.

In terms of adoption and development, VR currently has the edge but AR is not far behind. AR technology can be used on computer tablets or with the emerging group of smart glasses that tend to look like safety goggles on steroids. With the glasses, AR gives users a hands-free ability to follow instructions or seek guidance while performing a task.

For example, a field technician equipped with AR glasses loaded with gigabytes of information could walk up to a broken compressor unit, and with a glance to his/her left, be shown an easily readable and scrollable repair manual.

A look to the right, and now the worker sees a 3D model of the compressor that can be virtually disassembled to show all the internal bits with a simple hand gesture. They can even play an instructional video specific to that compressor model before turning their focus back to the repair job.

If the machinery has sensors or an Internet-of-things device, then the AR glasses could allow the worker to see temperature, pressure, and other safety-critical data before even touching the compressor. And if there is a camera built into the glasses, the worker can have an impromptu video chat with a supervisor whenever he/she runs into trouble. Higgins envisions a future in which AR technology enables a single equipment expert to collaborate remotely with 50 or even 100 field technicians a day.

The big idea is that all of this will cut down on mistakes and downtime. Last year, the world’s largest aircraft manufacturer, Boeing, which coined the term AR, presented a study it did with Iowa State University that backs those claims. The study showed that nontrained university students using AR to assemble a mock airplane wing got it right on the first try 90% of the time and 30% faster than the groups who did not use AR technology.

With the hardware becoming widely available, the focus will soon turn to the software developers who will ultimately be charged with making VR and AR devices indispensable tools of our modern age. But to achieve ubiquity, those developers need companies from all sectors to start using the technologies and help uncover their most valuable applications.

This chicken-and-egg situation reminds Higgins of the time when another smart gadget was first rolled out into the market before eventually taking the world by storm. “I waited in line in 2007 to get the first iPhone and I used it mainly for email and texting,” he said. “Now, I use it for 50 or 60 different things because the apps became available. It’s become part and parcel of everything we do.”