Twenty-Year Effort Brings Only Two FPSO Vessels to US GOM 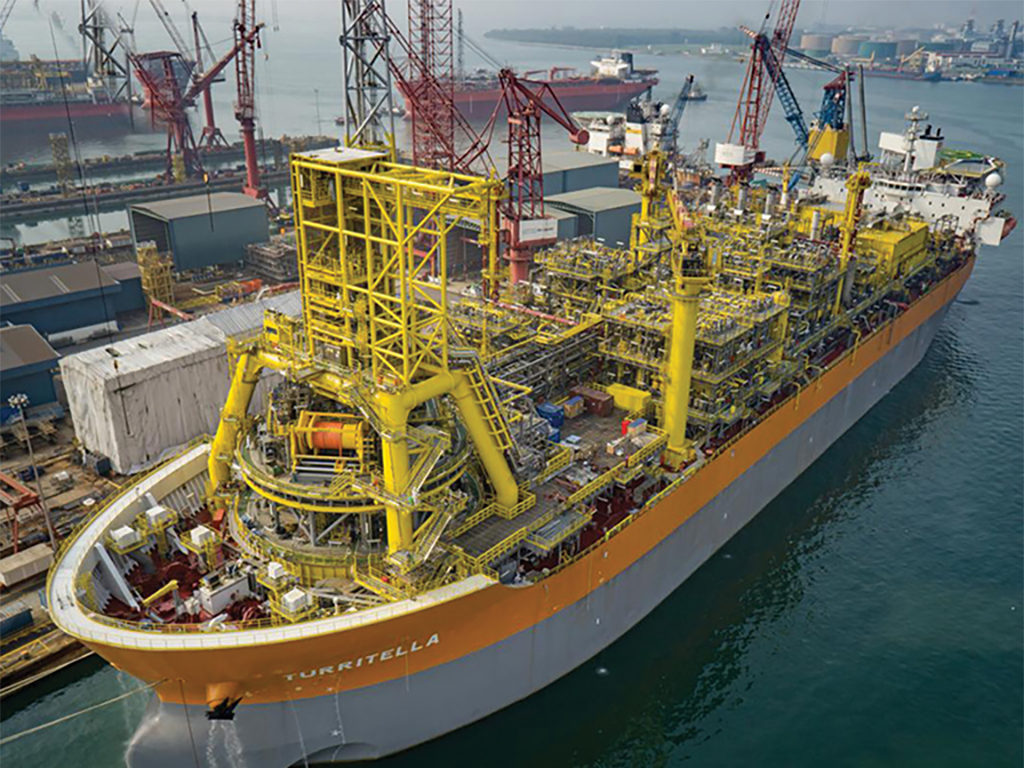 Photo courtesy of Shell
The Turritella FPSO vessel for Shell’s Stones project is shown docked at the Keppel Shipyard in Singapore before sailing to its field production site in the US Gulf of Mexico.

The floating production, storage, and offloading (FPSO) vessel is the world’s most widely used floating production system, with 218 units worldwide installed or on order. Yet, despite the United States offshore industry’s major advance into remote, deepwater projects, there are only two FPSO vessels in the US Gulf of Mexico (GOM).

Speaking to the Rice Global Engineering and Construction Forum at Rice University in Houston in June, floating systems consultant Peter Lovie, who has worked on FPSO-related projects for more than 2 decades of a 50-year engineering career, gave a close-up view of the persistent effort to bring FPSO facilities to the US gulf. His talk was titled “2016 and Two FPSOs in the US GOM: The Twenty-Year Saga.”

An FPSO vessel produces oil through onboard wells or is connected to subsea producing wells and in some cases receives oil from nearby production facilities. The vessel stores the produced oil in its hull and offloads the oil to tankers that station themselves next to the FPSO vessel, load the oil, and carry it to market. By offloading to tankers, FPSO facilities can avoid the need for oil pipelines connecting to shore and their major installation costs, although some FPSO units do connect with pipelines.

FPSO vessel installations began in the 1970s and have often been viewed as an enabling or facilitating solution for remote, frontier, or deeper developments far from pipelines, where the local oil market or overall project economics may not justify pipeline installation. By not being tied to pipelines, FPSO vessels typically have the flexibility to supply multiple destinations. The FPSO concept fits well with export-oriented projects but can also work at projects supplying domestic or nearby markets. In those cases, oil is carried to shore by shuttle tankers.

Lovie described how the US industry became interested in potential FPSO developments as it pushed into deeper waters in the GOM in the mid-1990s. Texaco, considering development of the relatively remote Fuji prospect in 1,700 ft of water, approached the US Minerals Management Service (MMS) during 1995–1996 to approve the use of a FPSO vessel with shuttle tankers for the project.

The MMS was unwilling to consider it without the completion of an environmental impact statement (EIS), something the agency had not required for other deepwater production facilities, Lovie noted. And the EIS would need to be done at industry expense.

The DeepStar research and development joint industry project agreed to fund the EIS, an effort that took 5 years and cost USD 3 million, Lovie said. It was a measure of Texaco’s and the industry’s high interest in FPSO systems that the EIS was carried through despite Texaco giving up on Fuji because of poor drilling results before the EIS was finished. Lovie praised the work of Allen Verret (then with Texaco), who led the DeepStar EIS initiative that involved about 60 different stakeholder organizations.

After a lengthy review of the 793-page EIS, the MMS issued a decision to allow FPSO systems in GOM field development plans in December 2001.

However, even before DeepStar’s completion of the EIS, Shell in 1998–1999 studied the possible use of a FPSO system at its deepwater Na Kika prospect in the GOM. Given the status of the EIS, it was a “gutsy” move, Lovie said. Under the leadership of George Rodenbusch, a Shell project team analyzed design choices point by point before settling on a semisubmersible system to develop the project.

With the favorable MMS decision and the interest in US FPSO projects, the oil tanker industry examined options for bringing shuttle tankers into GOM service, hoping to replicate the successful North Sea shuttling model.

The provisions of the US Jones Act, passed in 1920 to protect US merchant shipping, made the task difficult. The law requires vessels that carry cargoes between US ports (with offshore production facilities treated as ports) to be US-built, US-crewed, and 75% US-owned. As a result of the act, vessels are three times more costly to build in the US than in many international shipyards, Lovie said.

Two shipping companies proposed different shuttle tanker designs, one using US newbuilds and the other using converted US product tankers. But by 2004, interest in FPSO developments began to wane among GOM operators, in favor of other floating production systems.

The FPSO idea remained an option for the GOM, but it soon saw a major conceptual change after hurricanes Katrina and Rita hit the US gulf in 2005. Not only were many platforms destroyed or seriously damaged, 19 jackup and semisubmersible mobile offshore drilling units (MODUs) went adrift. It had happened before but never on this scale. At least one MODU drifted 145 miles.

Until this time, GOM FPSO concepts had called for permanent stationing. That thinking began to change. “What happens if one of these rigs adrift slams into an FPSO laden with oil?” Lovie said. An FPSO hull might store half a million bbl of oil or more, and visions arose of a spill resembling the Exxon Valdez incident.

Operators soon decided—without regulatory prompting—that FPSO vessels installed in the GOM must be disconnectable, as are many FPSO units in the Far East and off northern Australia. In hurricanes, these vessels shut in production, disconnect from their moorings and wells, move off station to safety on their own power, and return afterward to reconnect systems and resume production.

The one US FPSO proposal then advancing toward a development decision was for the Cascade and Chinook fields in the GOM’s remote Walker Ridge area. Isolated from pipelines, the fields lay in 8,100 ft to 8,800 ft of water.

Devon Energy, an interest owner in the acreage with Petrobras, Total, and two other companies, had looked at potential FPSO and FSO (floating storage and offloading) development concepts in the GOM for some years under Vice President Dave Bozeman, Lovie said. With leases due to expire in 2006, Petrobras, Devon, and Total went ahead with Cascade/Chinook. Petrobras, with its deepwater experience and more FPSO units in operation than any other company, became the operator and bought out two interest owners that wanted to leave the project. A team headed by César Palagi, Walker Ridge asset manager at Petrobras America, led the development effort.

Not only were the two fields remote, there remained uncertainty about the reservoirs. The project team saw the use of an FPSO vessel as an early production system that could expedite development and produce for a 5- to 8-year period that would allow full evaluation of the reservoirs. The vessel could then be retained, replaced with something different, or removed (and possibly reused elsewhere), should the fields no longer be economic.

In August 2007, the Cascade/Chinook partners awarded a bid contract to BW Offshore to design, build, and lease the BW Pioneer, a project that entailed the conversion of a double-hulled Aframax tanker into the US GOM’s first FPSO vessel. Overseas Shipholding Group (OSG) was awarded the contract to provide the project’s two shuttle tankers, which were US newbuild Handymax vessels converted for loading operations from a FPSO unit.

The BW Pioneer, with an oil storage capacity of 500,000 bbl, was installed on Walker Ridge Block 249 in February 2010. (Devon, having exited the offshore business, had since sold its interest in the project to Petrobras.) Equipped to process up to 80,000 B/D of produced fluids and 16 MMscf/D of gas, the vessel was being readied for first production when the Macondo disaster occurred and brought all plans to a halt.

With operations shutting down across the GOM, the new FPSO vessel was used to help with the spill recovery. Soon the US regulatory regime was dismantled and reorganized, followed by a lengthy reexamination of existing rules. Petrobras managed its way through all of this and an unexpected repair needed in the riser system.

Finally, on 25 February 2012, the BW Pioneer became the first FPSO vessel to produce oil in the US GOM. The shuttle tanker Overseas Cascade soon loaded the first cargo, and production and shuttling have proceeded smoothly since then with an uptime ratio exceeding 90%, Lovie said.

Two months later, after years of study, Shell filed plans with the Bureau of Safety and Environmental Enforcement (successor to the MMS) to develop the Stones project in a record 9,500 ft of water, with a host FPSO vessel in Walker Ridge Block 551.

The following year, Shell contracted for the design, construction, and operation of the FPSO unit under a lease with SBM Offshore and the time charter of a shuttle tanker from OSG. The FPSO project involved the conversion of a Suezmax tanker, which was renamed the ­Turritella, and the shuttle vessel, the OSG Tampa, was developed by converting a US newbuild Handymax tanker.

The Turritella, with an oil storage capacity of 800,000 bbl and processing capability of 60,000 B/D of oil and 15 MMscf/D of gas, arrived on site in early 2016 in preparation for production startup later in the year. Shell has a 100% interest in the development.

Lovie lauded the work of the Stones project team led by Shell’s Curtis Lohr, citing the achievement of using lazy wave steel catenary risers for the first time in the world on a disconnectable FPSO vessel. The project’s record of 13.2 million man-hours worked without an incident made it the safest comparable project within Shell and possibly the industry’s safest FPSO construction project ever, he noted.

“Shell has done a remarkable job,” Lovie said. “Stones makes you proud to be an engineer.”

Why Only Two FPSO Vessels?

As to why there are only two FPSO vessels in the US GOM, Lovie offered several reasons. The gulf’s flat alluvial plain extending more than 100 miles from shore allows simple, cost-efficient installation of pipelines, in contrast to some other parts of the world. Also, until late last year, the US prohibited oil exports from the GOM, eliminating an incentive for offshore storage found in some other waters.

Lovie further cited the Jones Act, which has made US shipbuilding costs largely noncompetitive, as a barrier to the shuttle tanker business. He suggested that the act be amended to eliminate the “build in US” requirement while keeping the US crewing requirement, which can help maintain a source of experienced crew personnel for inland and offshore waters.

However, the outlook for new FPSO developments in the GOM and worldwide is poor over the next few years, and possibly for longer, with the major capital spending cuts affecting offshore projects, Lovie said. While the US decision to allow crude oil exports could make FPSO projects more attractive, Lovie predicted little or no near-term impact and doubted that the US would see a new FPSO vessel in the next decade.

At an FPSO conference in Houston last fall, attendees were asked to predict the number of FPSO contracts to be awarded globally in the next couple of years. Most predictions ranged from zero to four orders this year and not many more in 2017, according to Lovie.

“Longer term might be better,” he said, “but what year does that start?”

Twenty-Year Effort Brings Only Two FPSO Vessels to US GOM

Hydrocarbon processing and treating systems often require large and elaborate surface facilities. When operating in challenging locations, such as deep water or the Arctic, these systems can be expensive. This paper discusses a new adsorption-based gas-separation technology platform.

Petrobras and Shell have brought online the Lula field’s seventh FPSO as the firms continue to ramp up production from the pre-salt Santos Basin.