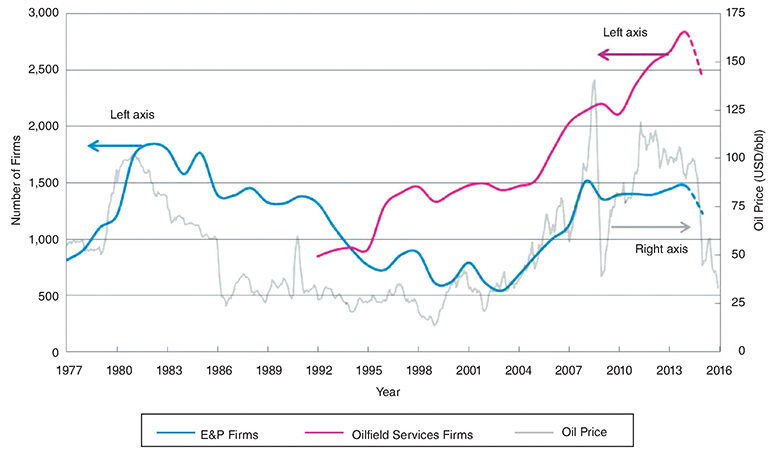 Chart courtesy of IHS.
Oilfield service companies have taken over as the big spenders on research and development in exploration and production after oil companies reduced their role during the 1980s oil bust. Both groups significantly increased their outlays until cuts in 2015.

Oil prices are so low that the oil industry is having to consider doing things differently. It is a hopeful sign for the future for innovators who have been struggling to keep going and have potential customers with little to spend and a lot to worry about.

“What we see is a lot of consolidations and slowdowns now. A lot of risk-averse folks out there who do not know if their companies will survive from one day to the next,” said Chuck Matula, who is a board adviser and founder of a company called Drill2Frac, which offers services aimed at unconventional producers.

“2015 was an absolute blur. Absolutely everyone was trying to keep an oilfield operation afloat, there was so much indecision and uncertainty,” Richard Broderick president and chief executive officer (CEO) of Fountain Quail Water Management, said during a session at the recent IHS CERAWeek conference in Houston.

Demand for the water company and others has slowed as drilling and completion work plummeted in shale fields where the cost of adding production exceeds the price of oil, which dipped below USD 40/bbl in early April.

Those still on the payroll have powerful motivation to consider how to reduce operating costs or increase production enough to pump profitable barrels if oil edges toward USD 50/bbl.

Those with likely answers to that question “were getting some traction when prices where high, but not as much as they are now,” said Vikram Rao, executive director of the Research Triangle Energy Consortium. Sales are limited because “they can only make that point to survivors.”