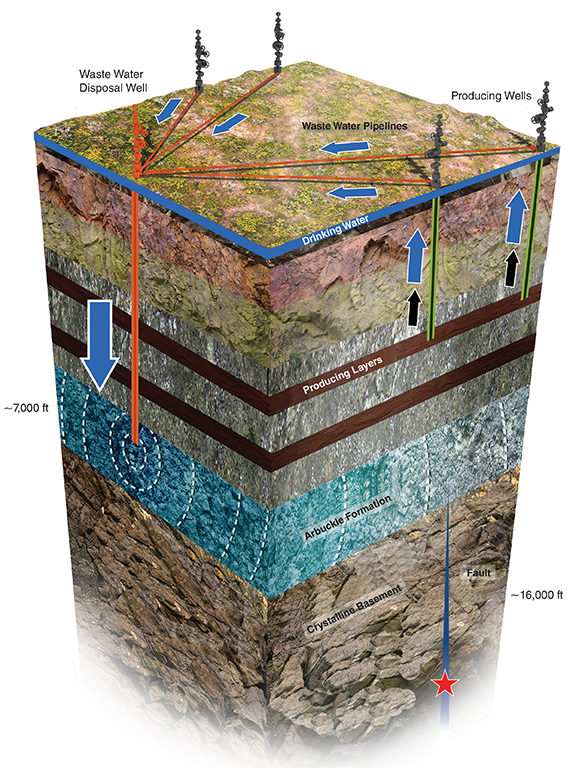 Graphic courtesy of Steven Than/Stanford University.
Scientists and regulators in Oklahoma have concluded that the high-volume injections into the subsurface are increasing the pore pressure inside the rock along the faults, which creates a greater risk of the faults slipping.

Industry regulators in Oklahoma have rolled out broad new restrictions on more than 600 disposal wells as part of the largest action of its kind taken in response to earthquakes.

An additional 118 wells have been included in an “area of interest” and face increased reporting and monitoring requirements. Altogether, the plan affects approximately 20% of the state’s disposal wells and marks a major change for the fourth-largest oil- and gas-producing state in the US.

The Oklahoma Corporation Commission, the state’s industry regulator, spent a year issuing volume reductions and shut-ins at a number of specific disposal sites, efforts that failed to slow the rising rate of earthquakes. Then on 13 February, the third-strongest earthquake in Oklahoma history shook homes across the state and was felt hundreds of miles away by residents of three neighboring states. No serious damage or injuries were reported. But just days after the 5.1 magnitude trembler, regulators abandoned their pinpoint approach and announced a “regional earthquake response plan” that covers approximately 10,000 sq miles—an area twice the size of Qatar.

For the foreseeable future, no new disposal well permits will be granted in the restricted zone, and operators must curtail fluid injections into existing wells by 40% of their 2014 average rate. Based on last year’s figures, that means a reduction of fluid injection of approximately 300,000 B/D.

Because water disposal is a necessary component of oil and gas operations, the immediate scarcity of disposal wells may drive up fees at sites operated by third parties. Recycling or trucking the water outside of the restriction zone are expensive options that few operators can afford right now.