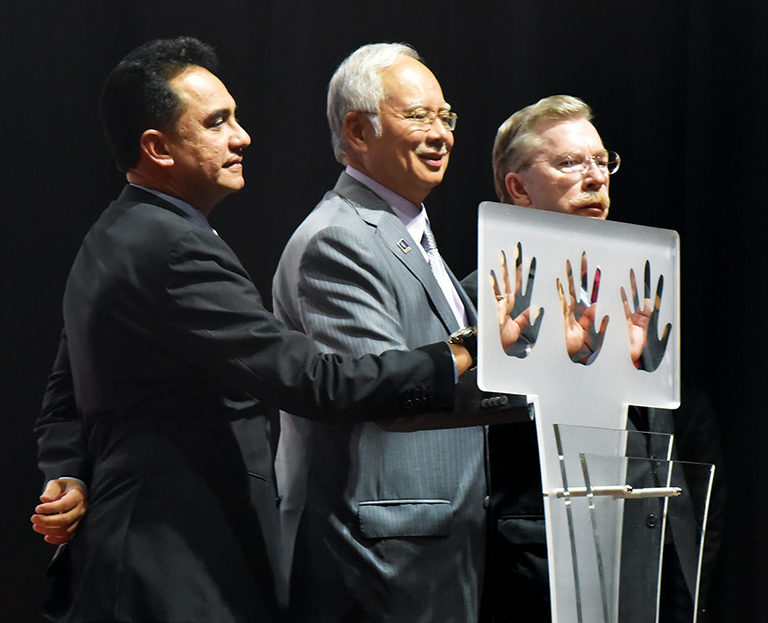 More than 15,000 energy professionals representing 2,500 organizations and 60 countries gathered from 21 to 25 March in Kuala Lumpur for the Offshore Technology Conference (OTC) Asia. With the theme “Excellence in Asia,” the conference builds upon the highly successful inaugural OTC Asia held in Kuala Lumpur in 2014.

The conference reflects Asia’s position as a global provider of exploration and production (E&P) technology, in which cultural and geographical diversity foster collaboration and innovation.

The prime minister of Malaysia, Dato’ Sri Mohd Najib bin Tun Abdul Razak, gave the keynote address during the opening ceremony. Speaking about Malaysia’s role in both the Asian oil and gas industry and the global economic market, the prime minister said the country was in position to further develop a diverse economy and become a central figure in an industry undergoing volatile change.

Najib said the industry must have a realistic perspective on its immediate future. He said crude oil prices will likely remain low because of several external factors, including the continuing supply of shale oil in the US, Iran’s re-entry into the oil and gas market, and the intransigence of the Organization of the Petroleum Exporting Countries in cutting production to limit supply.

Despite this immediate outlook, Najib said the Malaysian economy is in position to withstand the aftereffects of the low-price environment in large part because of his government’s push for greater economic liberalization during his 7 years in office. The prime minister cited his MYR-67-billion stimulus package in 2009 as a significant driver of economic growth.

“Since I came in office, the [Malaysian] government has been making the necessary steps to have in place important measures to ensure that our economy remains resilient, to buffer our economy so as to weather any significant systemic shocks from domestic as well as external sources,” he said.

Datuk Wan Zulkiflee Wan Ariffin, chairman of the OTC Asia Advisory Committee and president and group chief executive officer (CEO) at Petronas, said that Asia is positioned to play a leading role in the global hydrocarbon market. The continent accounts for nearly one-third of the global economy, and he estimated that it will deliver two-thirds of global economic growth over the next 4 years.

“Notwithstanding the current slowdown, Asia will continue to drive [the industry], spreading its sphere of influence across the globe,” he said. “During the 1997–1998 Asian financial crisis, Western economies suffered little from the ripple effects. However, today, they are no longer immune to Asia’s oscillations.”

Zulkiflee said that one side effect of Asia’s economic push is that it has “opened the floodgates” of innovation and technological development.

“On all fronts, Asia is striving for excellence. For the oil and gas industry, currently adapting to a fundamental shift, this mindset and drive for excellence will be critical to adapt to the challenges at hand and to ensure long-term robustness,” he said.

Two executive plenary sessions were the highlight of the conference, giving executives a platform for discussions about the industry in Asia in particular and leadership in general.

At the first executive plenary session, the panel discussed the steps needed to approach sustainable growth in the midst of low oil prices. The session, titled Offshore Technology and Excellence in Asia, also touched on possible technology gaps between Asia and the rest of the world.

Andy Brown, upstream international director at Shell, said that deepwater projects still represent the most economical path for the industry in a low-price environment primarily because of their prolific production output per well. In addition, because the sector is more established, deep water offers the most opportunities for owners and operators to deliver innovative technologies and keep costs down.

“It’s looking at the unit costs of these projects,” Brown said. “We have to have projects that will deliver the best. That is the important thing, our ability to be at the lowest cost on the overall cost curve and not be the marginal cost company. That’s why deep water is going to be an important part of our portfolio going forward.”

The panelists also discussed the role of collaboration in the current economy and whether it is a useful tool in increasing project efficiency. Jeffrey Miller, president and chief health, safety, and environment officer at Halliburton, said collaboration is only effective if the involved parties are willing to change their procedures in the pursuit of a better outcome. “I would say, in the current commodity environment, that we’re having better discussions around what collaboration might look like and how it might reduce costs, but, at its heart, it needs to define an outcome that we can achieve as opposed to defining how we achieve that outcome,” Miller said.

The panelists also discussed Malaysia’s role in the industry and whether development in the country and the Asian continent is lagging behind other parts of the world. Datuk Mohd Anuar Taib, senior vice president of upstream Malaysia at Petronas, said many investors see the region as a low-cost opportunity. However, he said, continued investment will help the region catch up to the technological developments seen elsewhere. Anuar pointed to Petronas’ investment in carbon dioxide sequestration, separation, enhanced oil recovery, and imagery as examples.

“In the region, I think it’s a mixed bag of development along the technology space,” Anuar said. “By far, in Asia, we are very much being used as a place to build manufacturing facilities, almost a low-cost labor position. But we’re going up the curve.”

Brown and Miller disagreed with the notion of Asia being purely a low-cost opportunity for owners and operators. Miller said it is a mistake to equate increased manufacturing in Asia with purely cost-cutting motives and that research and development efforts in the region have been just as important to the industry as any cost savings. Brown said Malaysia, in particular, was a great place for innovation.

The second executive plenary session of the conference gathered three leaders, who also happen to be bosses, on stage to talk about the distinction between the two titles.

While the three speakers appeared to have differing leadership styles, as evidenced by the suits worn by Rice and Peshawaria compared with the jeans and T-shirt worn by Fernandes, they all seemed to recognize common traits that differentiate leaders from bosses. These traits, they agreed, were transparency and honesty.

Fernandes continued the thought. “I think too many leaders are not transparent and poor communicators,” he said. “So there is suspicion between the team they lead and the leader himself.”

That better future is created, from a leadership perspective, through empowering people, the panel said. “Leadership is about turning raw diamonds into diamonds,” Fernandes said. “You are only as good as the people behind you.”

“Bosses use position power,” Peshawaria added. “Bosses use their title to coax people. Leaders use the power of their values and their purpose to influence, not their position. Leaders look to the future. Bosses cling to the past.”

The panel was able to offer a perspective of the oil and gas industry from the outside because none of them work within the industry. Fernandes pointed out that the low oil prices were actually good for his airline business. However, he said, his company does not act differently during the good times than it does in the difficult times. 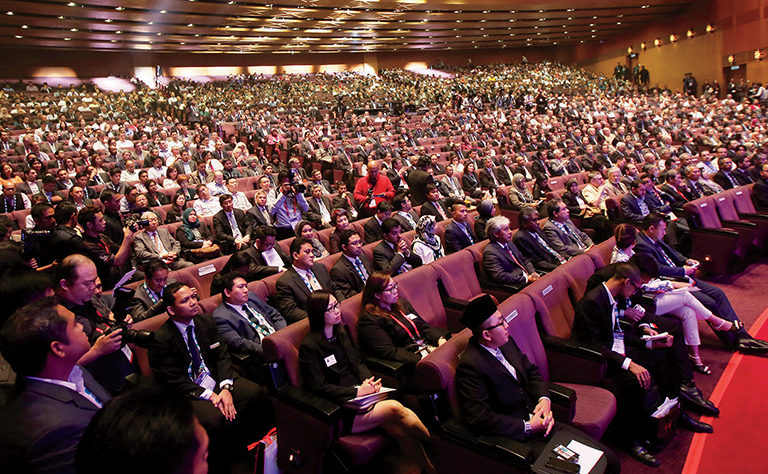 “The first page of the playbook is it’s a cycle,” Rice said. “That’s Rule 1. Rule 2 is communicate. You’ve got to be out front talking to people.”

“In a downturn, it’s the people that suffer the most,” Fernandes said. “And the message to organizations here is that your biggest asset is your people. And that should be the last thing that you want to cut, really, because you have invested hundreds of millions of dollars in developing these people.” 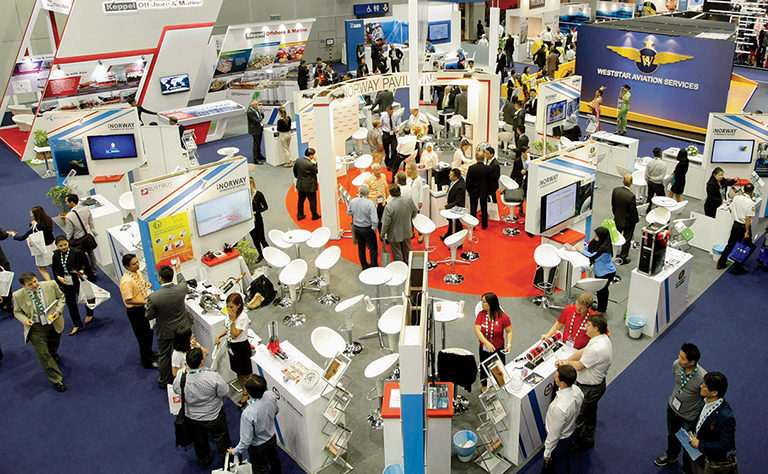 In addition to the plenary session, the conference also presented 10 panel session and six special sessions. “These sessions are designed to be highly relevant to the industry in the current climate, as it deals with the impact of low prices,” said Muhammad Zamri Jusoh, vice president of Malaysia Petroleum Management at Petronas and chairperson of this year’s program committee. “Taken together, the sessions provide a holistic view of the challenges and opportunities facing the industry and what it can achieve by getting things right.”

The fifth panel session of the conference encapsulated that concept of challenges and opportunities. After an introduction that presented the current depressed state of the oil and gas market, industry leaders from service, production, and consulting companies found room for cautious hope, reminding attendees that oil and gas “is a long-term business.”

The panel members agreed that the current market volatility will not last. The only question, said Zain, was when the market would recover and at what price point. Zain was the least optimistic of the panel members, saying the current sub-USD-40/bbl market will last for the next 5 years. He went on to point out that the current situation was only bad in light of the USD 100/bbl companies had grown accustomed to.

When asked if he thought the party was over, he said, “It’s still a party. At USD 40, it’s still good. In the 1990s, we all made money at USD-20 oil. Everybody lived very happily, and we had great lives.”

The panel agreed that preparation and vigilance are necessary during times of a strong market, and, although the panel increasingly found a hopeful tone, “hope is not a strategy,” Truelove said. “So we try not to focus too much on predicting price.”

Hess, he pointed out, was in the fortunate position of recently having gone through a major reorganization in 2013, selling assets it did not consider core to its portfolio and implementing lean processes. “We did all that when oil was USD 100/bbl, so we entered the downturn with very low debt and a good amount of cash on hand,” he said. The result has been that Hess has not had to eliminate positions or cancel any major projects. Not all firms have been as fortunate.

One problem that appeared with the healthy market was a sense of complacency that led to a trend away from efficiency. “When oil was USD 100/bbl,” Truelove said, “it was almost too easy to make money, and people got a little bit lazy.”

The struggle now is for firms to find the efficiency that was not tended to during the higher-price market. “Once in a while,” Taib said, “the industry does need to be recalibrated.”