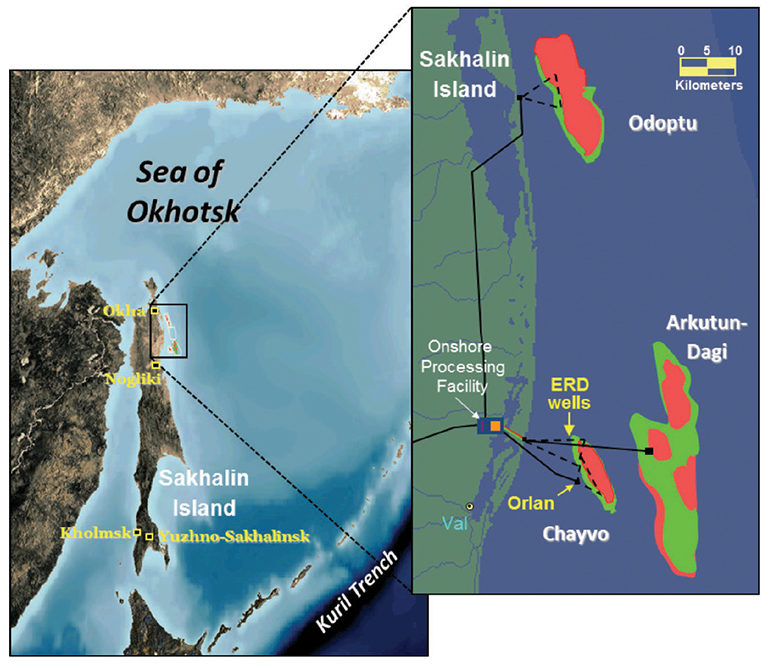 Eight of the world’s 10 longest wells have been drilled by ExxonMobil as operator of the Sakhalin-1 project in Russia. Components and drilling tools involved in the well design are evaluated and redesigned throughout the program to maximize penetration rate and reduce flat time. Drillstring-torque capacity was recognized as a limiter for increasing penetration rate and for reaching total measured depth capability. The operator consequently sought an alternative drillpipe connection with higher torque capacity.

The Sakhalin-1 project comprises the Chayvo, Odoptu, and Arkutun Dagi fields off the east coast of Sakhalin Island, Russian Federation. Development drilling at the Chayvo field started in 2003 with extended-reach wells drilled from an onshore location with the Yastreb drilling rig. In 2005, further development drilling commenced from the offshore Orlan platform site. Subsequently, in 2008, the Yastreb rig was moved approximately 75 km north to the Odoptu onshore wellsite and drilled nine extended-reach-drilling (ERD) wells as part of the initial-stage development of Odoptu. During the Odoptu campaign, it was determined that a higher-torque 5⅞-in. drillpipe connection with good runnability was needed. Following the Odoptu campaign, the Yastreb rig was moved back to the Chayvo onshore wellsite in 2011 for further development and infill drilling of the Chayvo reservoirs.

This article, written by Special Publications Editor Adam Wilson, contains highlights of paper SPE/IADC 168049, “New Rotary Shouldered Connection Expands the Capability of World-Record ERD Operation,” by S.R. Sanford, SPE, and M.W. Walker, SPE, ExxonMobil; and J.N. Brock, M.J. Jellison, SPE, and A. Muradov, SPE, NOV Grant Prideco, prepared for the 2014 SPE/IADC Drilling Conference and Exhibition, Fort Worth, Texas, USA, 4–6 March. The paper has not been peer reviewed.
...
This article is reserved for SPE members and JPT subscribers.
If you would like to continue reading,
please Sign In, JOIN SPE or Subscribe to JPT