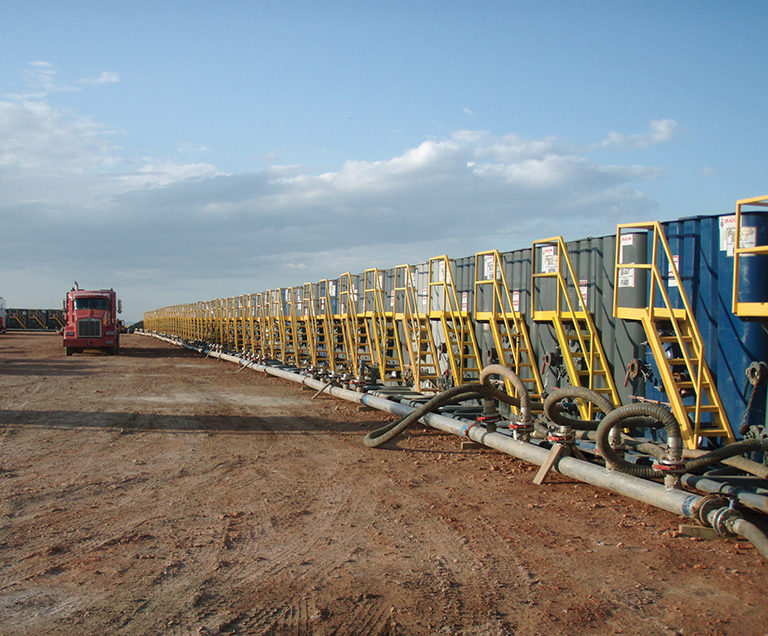 Photo courtesy of Joshua Doubek.
A row of “frac tanks” used to hold water before and after a hydraulic fracturing operation stand ready at a wellsite. An increasing number of researchers and companies believe the flowback stage holds many of the keys needed to unlock more potential from shale wells.

Once a horizontal well is hydraulically fractured, the next step is to clean up the well by flowing it back to remove water and loosen proppant from the wellbore.

Most shale producers in North America have given little thought to this flowback stage and see it merely as a prelude to the cash-flow generating production stage. However, a few companies have come to realize it represents a valuable opportunity to learn more about their wells in a week or two than their competitors are learning after several months of production.

Essentially, flowback data is a bridge between what happened during a completion and what will happen as hydrocarbons are produced. An important driver shared by all the interested producers is that for the most part, they are already required to record the flowback stage per US and Canadian regulations.

“So arguably, the cost of collecting this data is nil,” said James Crafton, president of consultancy firm Performance Sciences, who has been working with service companies and shale producers on different flowback issues for more than 15 years.

Crafton and others involved in this area have long been trying to convince the shale business that how a well is flowed back is often as important as the completion itself and that by ignoring this maxim, they are leaving money on the table. “It is that simple,” he said. “The frustration for me is that the data is there. We have the data, but nobody has the time or perceives the value to interpret the data.”